Borders are to maps what icing is to cakes. Tracing their course between countries and across continents is a source of great enjoyment for the cartophile, as is contemplating their history and function.

This contemplating is usually conducted while consulting maps of a relatively large scale, allowing for a good overview of the countries they separate. But sometimes the joy is in the detail. Consider the Swiss-Italian border, remarkable enough in its entirety. As it zigzags across the valleys and mountaintops of the Alps, three Italian protrusions northward are matched by three territorial thrusts south by the Swiss. Zooming in – as Google Maps now so handily allows – reveals two intriguing anomalies.

Fifteen miles northwest of Como, the Italian city adjacent to Switzerland’s southernmost point, is the enclave of Campione d’Italia, a speck of Italian territory surrounded by Switzerland on the shores of Lake Lugano. This blog has discussed other enclaves before (1), but not Campione d’Italia, as I have yet to find a map of sufficient appeal (2). 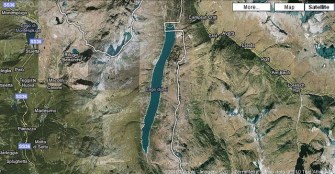 Following the Italo-Swiss border to the northeast, we find a second anomaly immediately after it bends south again. Whereas Campione is a well-known example of an easily demarcated category of border anomalies, this one intriguingly defies classificiation (3), and, perhaps as a consequence, has remained largely unreported.

Just west of the Swiss town of Avers, the border (now dividing Italy to the west from Switzerland to the east), suddenly juts out into what appears to be a perfectly rectangular box, exactly 1 km long and 500 m wide (3,300 by 1,700 ft). Odd as this is in itself, its geophysical context is positively intriguing. The box is situated at the northern end of the Lago di Lei, a meridionally oriented lake at an altitude of about 2,000 m (6,500 ft), about 7.7 km (4.8 mi.) long and 133 m (435 ft) deep. It runs parallel to the border just to its east.

Lago di Lei is an artificial lake, created by the hydroelectric dam at its north end. It is precisely this dam that is enclosed by the anomalous box. So we have an Italian reservoir controlled by a Swiss dam. Why? And who gets the electricity? There is very little information to be found on the Valle di Lei, even less on the construction of the Lago and almost nothing on the border anomaly itself.

Sources say the dam was constructed on Italian soil, then transferred to Switzerland in a territorial exchange in 1962-’63. It is now operated by Kraftwerke Hinterrhein (KHR) AG, a Swiss power company and produces 307 kWh per year, one would assume for the Swiss market. KHR’s website has some historical and technical background:

“The dam is a masterpiece of Italian engineering, construction and labour. As the valley was inaccessible, two cable lifts were constructed over a distance of 15 km (9.3 mi.), one for the workforce (numbering app. 1,500), the other for their material.”

“Works started in summer of 1957, the reservoir was filled for the first time in the autumn of 1962.”

The text fails to explain why, after all this effort, the Italian government would sign over the dam to Switzerland (or how much territory they got in return). In any case, although the concrete of the Lei dam was reinforced for military purposes, in the last few centuries,  the issues of alpine border demarcation have tended to be few, and peacefully resolved. The last one that springs to mind is that of Oetzi, the so-called ‘snowman’. The 5,000-year-old frozen remains of this prehistorical hunter were found a few feet away from the Austrian-Italian border. After some wrangling between both countries, the ownership was granted to Italy; Oetzi now rests in the South Tyrol Museum of Archaeology in Bolzano/Bozen in Italy.

(1) An enclave is a territory (or part of one) completely surrounded by another territory. Usually (but not always) an enclave is also an exclave (i.e. a part of a territory not connected to its ‘mainland’), so both terms are often used interchangeably. More on enclaves/exclaves:

* Exclaves and Enclaves in Eastern Cyprus (#33)

* The Enclaves and Counter-Enclaves of Baarle (#52)

* Cooch Behar, the Mother of All Enclave Complexes (#110)

* The Kentucky Bend; or Bubbleland, Not Far From Monkey’s Eyebrow (#178)

(2) The ‘strangeness’ of any map depends on several factors. The Campione enclave being a relatively familiar feature, a map would need to be somewhat special – but I have yet to come across a cartographic representation of Campione with that extra bit of je ne sais quoi. But as this second anomaly is both obscure and bizarre, a screen grab off Google Maps will do the trick. However, if anyone is able to supply a better map of this particular geopolitical oddity, please drop me a line.

(3) In which it is quite similar to the intra-Irish pene-enclave listed in footnote (1).

(4) the catchment area of the Lago di Lei is one of few areas in Italy where the waters do not drain into the Mediterranean. As they flow into the Rhine, they end in the North Sea.

As the world grows more interconnected, support for developing countries should be an even bigger concern, says former Irish President Mary Robinson. A failed state like Somalia, which lacks any […]