What is the difference between a brother and a stranger? Distance and time. As both grow, what is familiar becomes less so. As they decrease, what is strange becomes familiar.

These two maps neatly capture those two driving forces of human history – centrifugal and centripetal – via the rather unexpected medium of etymology. The first one goes back all the way to Proto-Indo-European, and the video above gives a hint of what that may well have sounded like. 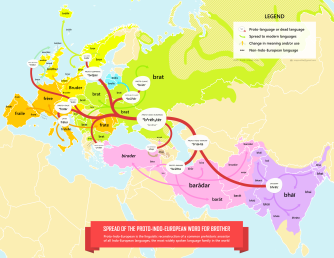 Map showing the spread over time and place of the Proto-Indo-European word for ‘brother’.Image by u/Virble, found here. Reproduced with kind permission.

The first one shows the spread of the word Proto-Indo-European (PIE) word for ‘brother’ across an area stretching from Iceland to Bangladesh. Although it may no longer seem obvious to speakers of Icelandic and Bengali, the word they use to refer to their mother’s (other) son derives from the same source.

We have no direct record of PIE. It has been reconstructed entirely from the similarities between the languages of the Indo-European family, based on theories of how they have changed over time.

The most common hypothesis is that PIE was spoken from 4500 to 2500 BC on the Pontic-Caspian steppes, the grasslands stretching from Romania across Ukraine into southern Russia. Its speakers then migrated east and west, so PIE eventually fragmented into a family of languages spoken across Europe, the Middle East, and the Indian subcontinent.

Those languages may be mutually unintelligible now, but the similarities between certain basic words still points to a common origin. And that’s how we’ve been able to reconstruct bʰréh₂tēr, PIE for ‘brother’.

Via Proto-Balto-Slavic, this turns into brat (in Russian and all other Slavic languages). Proto-Germanic is the intermediate to modern German Bruder, Scandinavian bror, Dutch broer, and English brother. Via Proto-Italic, we get Latin frater, and that gives similar-sounding words in French (frère), Italian (fratello), and Romanian (frate).

Things get interesting in Iberia. The local languages use another word entirely to describe brotherly kinship: it’s hermano (in Spanish) or irmão (in Portuguese). This derives from the second word of the Latin phrase frater germanus, which means ‘brother of the same blood’ (literally: ‘of the same germ’). The phrase was used to distinguish between ‘blood brothers’ and brothers by adoption, a common occurrence in Roman times.

Frater does have a descendant in the Iberian languages, but fraile (Spanish) and frade (Portuguese) only mean ‘brother’ in the ecclesiastical sense – similar to the English term friar. The change in meaning is indicated by the dotted line across the Pyrenees. Another dotted line on the Greek border denotes another shift in meaning: in Proto-Hellenic, *phrātēr means ‘citizen’ rather than ‘brother’.

On its march east, the PIE word for ‘brother’ transforms into Proto-Indo-Iranian, then branches off into distinct Proto-Iranian and Sanskrit strands. The Proto-Iranian (*bráHtā) radiates slightly to the west and more vigorously to the east; the modern Persian word (barâdar) makes it into Turkish as a loan word, but again, the meaning changes. In Turkish, kardeş is what you call your little brother (or little sister), while an older brother is called abi. Birader means ‘brother’ in a more symbolic sense, as ‘buddy’ or ‘comrade’. In Hindi and throughout the subcontinent, bhai and slight variations are the commonest word to express the brotherly bond.

While the Icelander and Bangladeshi might have some trouble recognising the other’s word for ‘brother’, it’s remarkable that PIE’s original term resonates so well in so many modern languages. As one commenter (on Reddit) said: “I am now fascinated by the idea that I can just go to a random village in the middle of Afghanistan, find the oldest man in town who has never heard or seen a foreigner, and that when I say ‘brother’ to him with a faint Jamaican accent he will probably understand what I mean, because the word in his native language sounds almost exactly the same.” 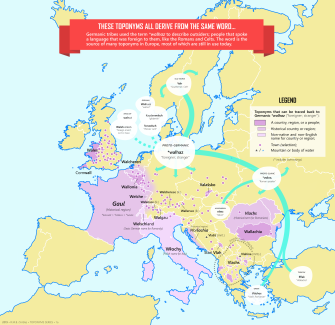 The Proto-Germanic word for ‘stranger’, and its impact on the map of Europe.Image by u/Virble, found here. Reproduced with kind permission.

In other words: brotherliness can survive great distances across time and space. The second map shows the opposite: how ‘stranger-ness’ can persist, even in close proximity. The Proto-Germanic word for ‘stranger’ is *walhaz.

Early on, it became the default term to describe the closest ‘others’, as in Old Norse, where Valr means ‘southerner’ or ‘Celt’. As such, it became attached to a number of southern/Celtic regions and countries, most famously Wales but also Gaul, Cornwall and Wallonia.

As the Gallic tribes were Romanised over time, the German(ic) term came to be applied to Romance speakers specifically, as for example in Welschland, the Swiss-German term for the French-speaking part of Switzerland. The Swiss-French term is la Romandie or la Suisse romande.

Something similar happened after the Proto-Germanic term was borrowed by Proto-Slavic. Vlokh came to mean ‘Roman speaker’, and was applied to the people (Vlachs, a former name for Romanians) and the region (Wallachia, in present-day Romania). The term Vlachs still applies to Romance-speaking minorities in the southern Balkans. In Polish, a variant Wlochy is used to describe the country the name of which in most other languages resembles ‘Italy’.

The dots represent city and town names containing the term, indicating points of contact between ‘us’ and ‘them’. These points are particularly plentiful in Britain, and in other areas of Western Europe where the friction between invading Germanic tribes and resident Roman citizens was strongest.

But while that clash of cultures persists in place names, the inhabitants of Walcheren (in the Netherlands), Wallasey (in the UK), Wallstadt (Germany), Welschbillig (France), Walshoutem (Belgium) and all the other dots on this map have stopped thinking in terms of ‘us’ and ‘them’ a long time ago. At least in terms of the ‘locals’. There’s plenty of other walhaz in the world, even if they are brothers from another mother.

Maps reproduced with kind permission of Reddit user u/Virble. For more of his etymological maps, check out this overview of his Reddit contributions.

English is a dynamic language, and this summer’s new additions to dictionary.com tell us a lot about how we’re living.
The Past

Linguists discover 30 sounds that may have allowed communication before words existed.
Thinking

Philosophers, theoretical physicists, psychologists, and others consider what or who is really in control.
▸
19 min
—
with
Big Think
Life

Digitized logbooks from the 1800s reveal a steep decline in strike rate for whalers.
Up Next
Hard Science

In a first, astronomers watch a black hole’s corona disappear, then reappear

A colliding star may have triggered the drastic transformation.