The temple-rich city of Varanasi* is the most sacred place in the world for Hindus – comparable to what Jerusalem means for Christians, or Mecca for Muslims. It is located on the Ganges River in northern India, in the state of Uttar Pradesh. According to Mark Twain, Varanasi “is older than history, older than tradition, older even than legend, and looks twice as old as all of them put together.”

The legend Mr Twain refers to says that the city was founded 5,000 years ago by Shiva. Many localities in the city, especially near the sacred Ganges River, are associated with Shiva and other Hindu deities and as such are the locus of pilgrimage and veneration. Over 1 million Hindu pilgrims annually visit the city of about 1,5 million inhabitants. The Hindu faithful believe that bathing in the Ganges in Varanasi wipes clean sins, and that dying in the city guarantees release from the cycle of reincarnation.

Similar to Jerusalem, Varanasi is holy to more than one faith: Buddhists stream into the city where the Buddha gave his first sermon, and Jains revere it as the birthplace of one of their teachers.

This map details some of the sacred places of Varanasi, including some of the ghats (i.e. the steps that lead down to the Ganges river) that are used in rituals, including cremations. More information on the temples and other items marked on this map would be welcome. Any Varanasians in the room? 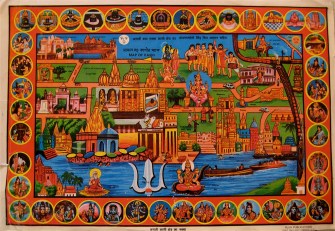 This map was sent in by David Wells and can be found here on his Flickr account.

* Also known as Benares, Banares, Avimuktaka, Anandakanana, Mahasmasana, Surandhana, Brahma Vardha, Sudarsana, Ramya, and Kasi or Kashi – the last two names of which mean ‘the Luminous One’, alluding to its status as a centre of culture, in the Rigveda (a Hindu holy scripture).