West Virginia is the state that seceded where others failed. When in 1861 the South broke away from the United States to form the Confederate States, the Mountain State in its turn left Virginia to remain within the Union. The electoral process by which it did this was highly irregular, and its accession to the Union could be considered illegal and unconstitutional. But in wartime, legal niceties count for less than tactical advantage, and West Virginia became a full-fledged member of the United States in 1863. The wrangling about West Virginia’s secession stopped only in 1939, when it paid the final instalment of its share of the pre-Civil War state debt to Virginia. 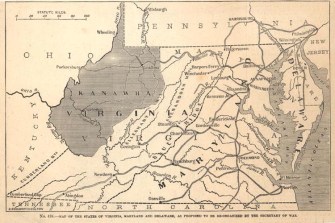 Possibly to annoy the Virginians even more, the first name proposed for the new state wasn’t West Virginia but Kanawha, after the river of the same name (1). But since the delegates to the state’s constitutional convention thought that to name the state thus would unnecessarily raise confusion with the county of Kanawha within the state, a new name was sought. Vandalia, Columbia, Augusta, Allegheny, New Virginia and Western Virginia were a few of the alternatives that bounced around the room. The delegates finally settled on West Virginia, in part also to reflect their Virginian heritage.

That decision was taken in December of 1861, so this map can be of no later date, since it still shows the seceding part of Virginia as Kanawha (as yet still without its eastern panhandle and some of its southeastern territory). It is a Map of the States of Virginia, Maryland and Delaware, as Proposed To Be Re-Organised by the Secretary of War. In this proposal, Delaware expands to include all of the Delmarva peninsula, including its Virginian part in the south, but more importantly, Maryland annexes all of Virginia between the Blue Ridge Mountains and the sea. As a consolation prize, Virginia gets Maryland’s western protrusion, making Hagerstown a Virginian city. But then there’s Kanawha seceding, leaving what remains of Virginia proper to look like an unseemly leftover. 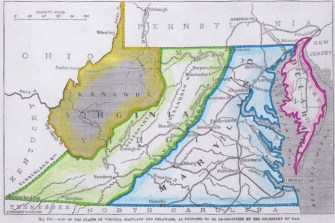 … and a coloured version, better demonstrating the proposed realignment of the states.

The Secretary of War mentioned must be Simon Cameron, president Lincoln’s first appointee to that post. Clearly, Cameron’s proposal was meant to give Virginians the heebie-jeebies, as their state is almost entirely wiped off the map. Maybe this was a ploy to scare Virginians against voting for secession? The Convention that deliberated Virginia’s secession, was in session from February 13 to April 15 of 1861, and its decision to secede wasn’t ratified until May 23, 1861. This map was likely drawn up in the intervening months…

“This map was so strange and inexplicable that I thought of your blog the moment I saw it,” says Adam Shulman. He sent in the link to this page at the West Virginia Division of Culture and History.