It’s 1864, and the Civil War is raging. But southern secession isn’t the only danger threatening the Union. The U.S. has plenty of other enemies, foreign and domestic. If they got their way, this is what the formerly united states would look like – not two, but four nations jostling for space and supremacy on the land mass between the Pacific and Atlantic.

The map title reads: “Our Country as Traitors & Tyrants Would Have It; or Map of the Disunited States”. It was published in New York by H.H. Lloyd & Co. In blue, it shows a maximalist version of the Confederate States of America (CSA).

The core of the CSA was composed of seven Southern, slave-holding states who seceded following the election of Abraham Lincoln in November 1860: Florida, Georgia, Alabama, Mississippi, Louisiana, Texas and South Carolina. After the Civil War began in April 1861, they were joined by four more slave states, this time from the Upper South: Arkansas, Tennessee, North Carolina and Virginia. The CSA later tried but failed to expand its authority over Missouri and Kentucky, which never formally declared their secession.

The map shows all these states but one as part of the eventual CSA, with Confederate Missouri only going up to the Missouri River, which transects the state. The Confederacy also gets New Mexico, the Indian Territory (now known as Oklahoma), West Virginia (which had seceded from Virginia to remain in the Union), Maryland and Delaware – and presumably also Washington DC, now stuck deep in blue territory. 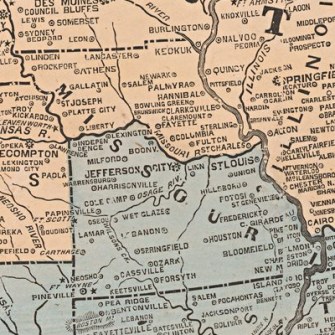 The rest of the U.S. is divided into three states. The Atlantic States (in orange) are the smallest of the four entities, and it consists of the six New England states (Maine, Vermont, New Hampshire, Massachusetts, Connecticut and Rhode Island), plus New York state, Pennsylvania and New Jersey.

The border between Pennsylvania and Ohio is now an international border, with the so-called Interior States (in yellow). It emerges on the southern shore of Lake Erie and runs south to an international tripoint (CSA, Atlantic States and Interior States) at Wheeling (a.k.a. Fort Henry) – lopping off the northern tip of West Viriginia’s northern panhandle and granting it to the Interiors. 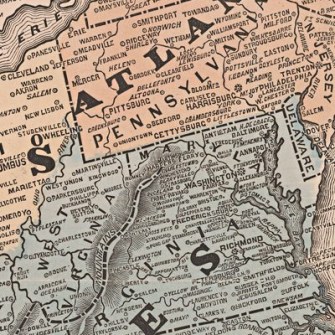 The Interior States comprise the area formerly known as the Northwest Territory, now covered by the states of Ohio, Indiana, Illinois, Michigan and Wisconsin (and part of Minnesota); and also areas up to the Rocky Mountains covered by (the rest of) Minnesota, the Dakota Territory (not yet divided into the states of North and South Dakota), Nebraska, Kansas, Montana and those parts of Idaho (1) and Colorado Territories to the east of the Rockies.

The remaining U.S. states and territories are part of the Pacific States (in red), i.e. California, Oregon, Washington, Nevada, Arizona and Utah (entirely) and Idaho and Colorado (partly).

Which are the forces that threaten the Union? The map gives no explanation, but shows three figures on the map edges, and each can be considered a danger to the U.S. To the east, the snake-protected bust of John C. Calhoun, Vice President under John Quincy Adams and Andrew Jackson. The South Carolinian was a strong defender of slavery and states’ rights, and was seen as one of the precursors of Southern secession. Calhoun represents the (domestic) ‘Traitors’ mentioned in the map’s title. 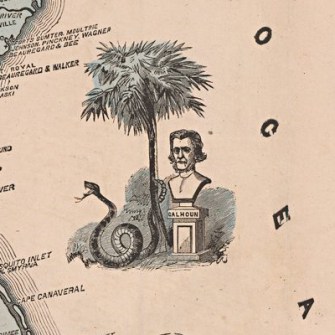 A sinister Canadian lion, hungrily gazing towards the Great Lake states and crowned to facilitate identification, represents the British Empire. The Brits remained neutral during the Civil War, but certain elements within both the Confederacy and Great Britain itself pleaded for British military intervention to turn the tide in favour of the South. Could this (foreign) ‘Tyrant’ be eyeing the Interior States as a new Dominion for the British crown? 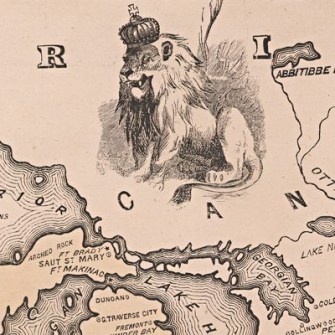 In Mexico meanwhile, French emperor Napoleon III is crowning Maximilian of Habsburg-Lorraine emperor of Mexico. The short-lived Second Mexican Empire was France’s failed attempt to establish a subsidiary monarchy in Mexico. The U.S. refused to recognise the Empire, continuing its support for the Mexican republic under Benito Juarez. Perhaps if the Empire had survived, it would have tried to foster a Mexico-friendly rebellion in the Pacific states of the U.S. 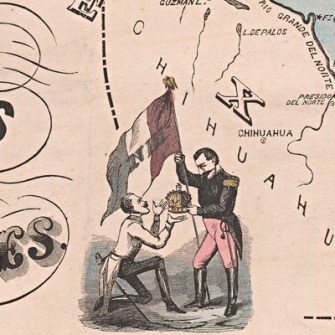 “To our knowledge, no other map of the Civil War era depicted such an extreme vision of a secession-torn United States”, write Boston Rare Maps, which recently sold a copy of this extraordinary map for an undisclosed sum. 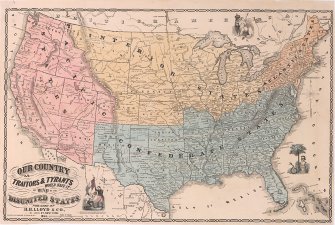 (1) The map shows Idaho Territory consisting of the current states of Idaho and Wyoming; this does not seem to have any basis in historical fact. Idaho Territory comprised the current states of Idaho, Montana and Wyoming up to May 26, 1864, when Montana Territory (coterminous with the later state of Montana) was organised separately, and the part that roughly corresponds to the present state of Wyoming was transferred to Dakota Territory.

Related
Neuropsych
Memory and the benefits of forgetting
Forgetfulness isn’t always a “glitch” in our memories; it can be a tool to help us make sense of the present and plan for the future.
The Learning Curve
5 Stoic quotes to help you through difficult times
“We suffer more often in the imagination than in reality.”
Starts With A Bang
The good reasons scientists are so hostile to new ideas
Many people out there, including scientists, claim to have discovered a series of game-changing revolutions. Here’s why we don’t buy it.
The Present
Climate change is altering the chemistry of wine
Smoke taint from wildfires is gross, even to wine amateurs.
13.8
Could a hidden variable explain the weirdness of quantum physics?
We have searched and searched but have never found one.
Up Next
Starts With A Bang
‘Star Trek: Discovery’ Goes Psychic & Psychedelic in ‘Lethe’: Season 1, Episode 6 Review
There’s no science in this episode of science fiction… but there’s a lot of suspicious happenings that no one’s noticing.Following up on the best episode of the season, thus far, […]