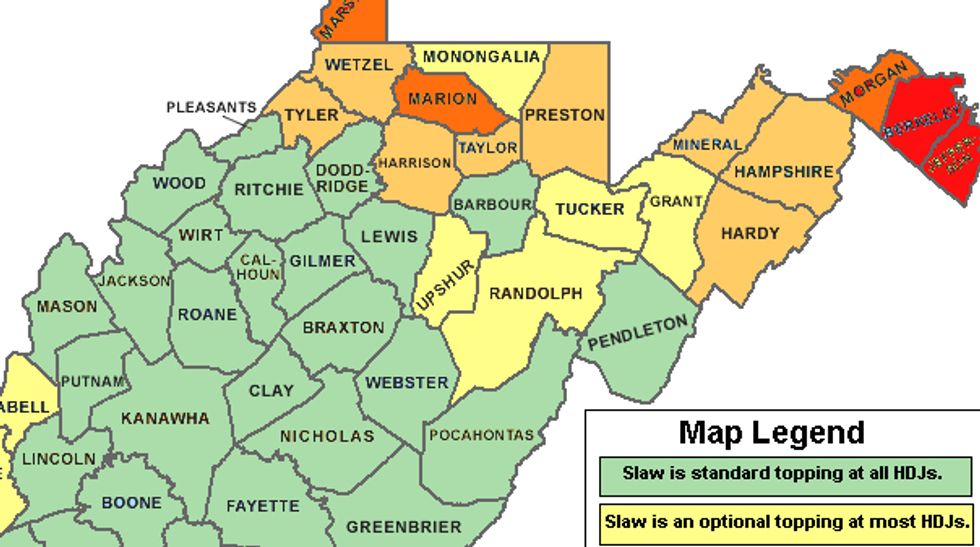 “The shootings, the knifings, the beatings… old ladies being bashed in the head for their social security checks… Nah, that doesn’t bother me. But you know what does bother me? You know what makes me really sick to my stomach? It’s watching you stuff your face with those hot dogs. Nobody… I mean nobody puts ketchup on a hot dog.”

Got that, punk? Hot dogs are serious business, and conflicts regarding what constitutes a ‘real’ hot dog may turn nasty (or even deadly, if it’s Dirty Harry you’re disagreeing with).

The elemental, essential parts of the hot dog are not in dispute – a frankfurter sausage (or ‘frank’) and an equally long, sliced bun to place it in. It’s what goes on the dog that causes all the trouble and discord. The garnishings and condiments that top up hot dogs vary greatly according to personal style and regional tradition. Among those regional varieties are, according to the National Hot Dog and Sausage Council (yes, there is at least one of everything in America):

The NHDaSC also cites a Southern preference for coleslaw as a hot dog topping (imaginatively dubbed ‘dragged through the garden’). This also happens to be an essential ingredient of the West Virginia Hot Dog (WVHD), as described by wvhotdogs.com:

“A true WVHD is a heavenly creation that begins with a wiener on a bun. Add mustard, a chili-like sauce and top it off with coleslaw and chopped onions (…) Different parts of West Virginia have variations on the theme but the common elements are sweet, creamy coleslaw and chili. Anything else is just not a true WVHD!”

Wvhotdogs.com is dedicated to “honoring and expanding awareness of this culinary delight”, by reviewing Hot Dog Joints (HDJs) in the state, and by providing this map. It details in which West Virginia counties coleslaw, that essential part of a WVHD, is habitually standard, optional or nonexistent as a topping. Notably, it is in both of West Virginia’s panhandles that coleslaw is least used.

If slaw dogs are a typically West Virginian phenomenon, it would indeed be understandable that they are less prevalent in the state’s most outlying areas. No HDJs in the Eastern Panhandle‘s two easternmost counties (Jefferson and Berkeley) offer coleslaw topping, and it is “usually not offered” in Morgan County, the westernmost one of the Eastern Panhandle’s three. Coleslaw is similarly inubiquitous is the Northern Panhandle‘s two most (Hancock, Brooke) and least (Ohio, Marshall) extremitous counties.

In West Virginia’s ‘mainland’, only Marion County mirrors the panhandles’ unfamiliarity with coleslaw. Strangely, nearby Barbour County is exactly the opposite: and island of hot dog orthodoxy in a sea of coleslaw renegades, where the topping is merely “optional” or “usually available”. In Barbour, as in the rest of the state (except the renegade north and northeast, and Cabell and Mercer Counties in the southwest), coleslaw topping is “standard”. As wvhotdogs.com states:

It would be interesting to know if this coleslaw deficiency in the state’s north and northwest corresponds to any broader cultural differences in the state. As for the origin and spread of coleslaw as a hot dog topping in West Virginia (and beyond), wvhotdogs.com has the following theory:

“Legend has it that slaw was first served as a hot dog topping at The Stopette Drive In on Route 21 near Charleston, West Virginia. This was during the Great Depression when weenies and cabbage were two of the most plentiful and affordable food items. The Stopette sold hot dogs with slaw for only a few years before every eatery in the area copied them. Within a few years restaurants all over southern and central West Virginia were including slaw as a standard ingredient. As many West Virginians left the state looking for work in the southern United States they took their taste for slaw on hot dogs with them. Slaw Dogs are now found in many areas of the south where West Virginia natives settled.”

And finally, it has this to say about ketchup on hot dogs:

“There are many reasons why one shouldn’t eat ketchup on a hot dog any hot dog. First, the National Hot Dog and Sausage Council’s Hot Dog Etiquette rules dictate that no one over 18 should ever eat ketchup on a hot dog. Ketchup is destructive of all that is right and just about a properly assembled hot dog since its sweetness and acidic taste overpowers food and disguises its true flavor.”

Many thanks to Rich Rostrom for sending in a link to this map.