When you think of it, borders are paradoxical. They connect what they aim to divide. A borderline marks, with guillotine-like precision, where two territories separate; but no matter how far they expand in either direction, those territories resemble each other closest at their common boundary.

Borders can be impenetrable or irrelevant, and possess any degree of permeability in between: highly militarised, annoyingly bureaucratic, or merely symbolic. In any of those degrees, borders retain an iconic status. They’re humankind’s answer to the shorelines and mountain ranges of geology.

Without borders, a map is blind. With those lines, cartography is armed with a elementary tool for basic triage: here from there, us from them.

But those boundaries serve another function. They mould the territory they circumscribe into a reassuringly familiar shape. This geographic Gestalt is why, even though the genesis of borders is mostly obscured by history, and their relevance is often obsolete, we get worked up when confronted with an alternate set of borderlines.

Those alternate borders fascinate us because of their imaginative out-of-placeness. Take a look at Jefferson’s proposal for new states in the US’s new Northwestern Territories, for example: they seem all wrong – probably only because they never made it off the drawing board [1]. 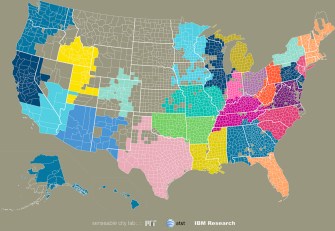 This map plays into our fascination with borders, both the iconic ones and their alternate versions. The linear base map shows the US subdivided into its constituent states and counties [2]. The colour overlay reveals so-called ‘call data communities’.

The extension of these areas was calculated by MIT and IBM, analysing anonymised call data. The map delineates zones in which people are more likely to call someone inside those areas rather than outside of them. The result is a revelatory re-mixing of states of America. Some split, others merge with their neighbours.

Some suggested names for a few of these new communication-based communities (or ‘communicities’). For upstate New York: Seneca. For the West Virginia-western Pennsylvania state: Monongahela, after the river (and the valley) that connects them. For Virginia and Maryland: Chesapeake. For more, see here at Underpaid Genius. Or here at the NY Times.

Many thanks for all who suggested this map: Jennifer Berg, Alex Meerovich, Serena Palumbo, Guy Plunkett III, and Jacob Schlegel. Hope I didn’t miss anyone. Original context here at MIT’s Senseable City Lab.

[2] 50 states and 3,143 counties or county-equivalents, to be exact. The latter denomination includes the 64 parishes of Louisiana and the 18 boroughs of Alaska.

[3] For more on the history of the Panhandle’s separateness, see #84.

[4] The only part of Missouri extending below 36˚30’N, at one time called ‘Lapland’, because it is where “Missouri laps over into Arkansas”. It was included in Missouri rather than Arkansas on the lobbying of a local planter, who argued that the area had more in common with neighbouring Missouri river towns than with the Arkansas hinterland.

Want a Chance to Win a New Big Think Tee?