Winnemac is a real-world North American name of a few persons and places, but also refers to a fictional US state, the brainchild of one of America’s most successful writers of the 20th century, who drew up detailed sketches of the towns and cities of Winnemac — maps which are tantalisingly difficult to find online.

‘Winnemac’ means ‘catfish’ in the language of the Potawatomi Indians, who live in the upper reaches of the Mississippi. The name also refers to three of their chiefs, one of whom signed the Treaty of Greenville (1795) with general ‘Mad’ Anthony Wayne. Wayne defeated the Indians in the Battle of Fallen Timbers, which ended the Northwest Indian War and handed the Americans possession of large parts of Ohio and of the area later home to Chicago. The Windy City is home to a Winnemac Avenue and a Winnemac Park; there is also an Indiana town called Winamac and a school district in Minnesota spelled Win-E-Mac.

Sinclair Lewis (1885-1951) was the first American to win the Nobel prize for Literature, in 1930. His breakthrough novel Main Street, depicting the small-mindedness of small towns, was set in Gopher Prairie, a fictionalised version of his own hometown of Sauk Centre, Minnesota. The citizens of Sauk Centre were so appalled at their portrayal in the book that Lewis devised a wholly fictional US state in which to set his subsequent, interrelated novels. He describes the state in his novel Arrowsmith (1925):

“The state of Winnemac is bounded by Michigan, Ohio, Illinois, and Indiana, and like them it is half Eastern, half Midwestern. There is a feeling of New England in its brick and sycamore villages, its stable industries, and a tradition which goes back to the Revolutionary War. Zenith, the largest city in the state, was founded in 1792. But Winnemac is Midwestern in its fields of corn and wheat, its red barns and silos, and, despite the immense antiquity of Zenith, many counties were not settled till 1860.”

“The University of Winnemac is at Mohalis, fifteen miles from Zenith. There are twelve thousand students; beside this prodigy Oxford is a tiny theological school and Harvard a select college for young gentlemen. The University has a baseball field under glass; its buildings are measured by the mile; it hires hundreds of young Doctors of Philosophy to give rapid instruction in Sanskrit, navigation, accountancy, spectacle-fitting, sanitary engineering, Provencal poetry, tariff schedules, rutabaga-growing, motor-car designing, the history of Voronezh, the style of Matthew Arnold, the diagnosis of myohypertrophia kymoparalytica, and department- store advertising. Its president is the best money-raiser and the best after-dinner speaker in the United States; and Winnemac was the first school in the world to conduct its extension courses by radio.”

Other Sinclair Lewis novels set in Winnemac are Babbitt, Gideon Planish, Arrowsmith, Elmer Gantry and Dodsworth. The state has been described as “more typical than any real state in the Union”; it has also been suggested that the name Winnemac might be an amalgamation of Wisconsin, Minnesota and Michigan. References throughout Lewis’ work seem to indicate that the state’s capital is called Galop de Vache, the largest city is Zenith, and others are Monarch, Sparta, Pioneer, Catawba and Eureka. 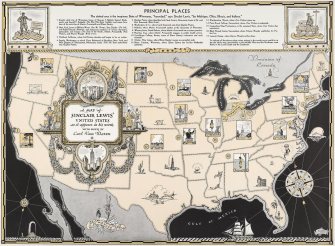 This “Map of Sinclair Lewis’ United States” was sent in by Travis. It was compiled in 1934 from references in all of the Sinclair Lewis books published up until then, and shows Winnemac as covering the southern quarter of Michigan’s Lower Peninsula, the northern half of Indiana and the northwestern quarter of Ohio. But, as Travis remarks, Lewis himself “personally made a ton of maps that detailed Winnemac down to the level of individual neighborhoods.” As early as 1921, wrote Lewis’s then wife in a letter to a friend, he had made “the most astonishingly complete set of maps of Zenith, so that the city, the suburbs, the state” were clear in his mind. Those maps remained unpublished during Lewis’s lifetime — they would have made for fascinating endpaper illustrations of the relevant novels.

Some of Lewis’s own maps of Winnemac were discovered in his Vermont studio in 1961, showing discrepancies with this 1934 map: Winnemac “is much further north than had previously been thought (…) New York City is decidedly southeast of Zenith (…) Lake Michigan is simply ignored by Lewis in creating the state.” According to Wikipedia, “Lewis’ map places Zenith due east of Chicago. Cities and towns on the map include Minnemegantic, Banjo Crossing, Roysburg, Tuttleville, Vulcan, Hamburg, New Paris, St. Ruan, Babylon, Chestnut Grove, Parkinton, Eureka, Aetna, Madrid, St. Agatha, and (of course), a Springfield.”