Where does the American South begin? Not at the Mason-Dixon line, but much further south, according to this (admittedly nonscientific) attempt to locate the Sweet Tea Line, as the actual, lived border between North and South.

As mentioned on the now-defunct website eightoverfive, “an interesting phenomenon exists in the Commonwealth of Virginia.  The northern and urban areas of the state do not generally offer sweet tea in restaurants, whereas it is a staple beverage in the southern part of the state. Many clear present-day distinctions exist between the cultures of the north and south, but could the availability of Sweet Tea be a quantitative example?”

This map shows the results of a survey of over 300 McDonald’s restaurants in Virginia as to the availability of sweet tea in their premises. The result is a dividing line between northern and southern culture quite distinct from other, more commonly used dividing lines, such as the aforementioned Mason-Dixon Line (marked 1760 on the map) and the border between the Union and Confederate states during the Civil War (1860 on the map). 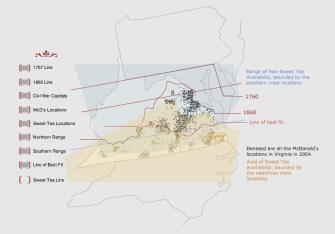 That line was established by calculating a median line between the southern range of non-sweet tea and the northern range of sweet tea.

Sweet tea is not available in the northernmost parts of Virginia, while non-sweet tea is available quite far south in the state. The resulting line of best fit dissects Virginia in roughly equal northern and southern halves, implying that ‘northern’ (i.e. non-sweet tea drinking) culture penetrates far more south than the older demarcations suggest. Is the Sweet Tea Line evidence of the North’s slow but inexorable cultural conquest of the South?

Thanks to Sean Holihan for pointing out this cool experiment. Original website no longer live; this map found here at Rebrn.com.

Understanding Mezirow’s theory of transformative learning can help you become a catalyst of change.
Up Next
Strange Maps