Seven countries currently ‘officially’ claim territory in Antarctica. But that number could increase to 47, if the principle of frontage were universally applied. That would even give Iran a foothold on the South Pole.

A map of the ‘official’ claims looks like a pie chart, as all are centred on the geographical South Pole(*). If all those claims would be realised, one would be able to visit those seven countries by simply walking in a circle around that one point. All territorial claims on Antarctica were ‘frozen’ by the Antarctic Treaty of 1961, which also stipulated that thereafter, no new claim could be made. Present claimants are: 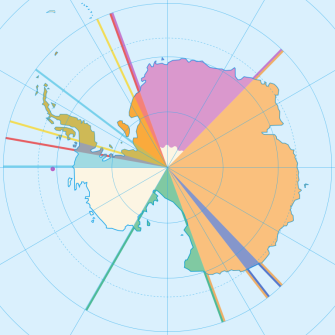 All claims apply to the areas south of 60°S, which is the northern limit of the Antarctic Treaty. The area between 90°W and 150°W remains unclaimed, except for Peter I Island, Norway’s claim on this territory being the only one in Antarctica that is not a sector (a ‘slice of the pie’).

This status quo has been maintained ever since 1961, certain signatories – notably the US and the USSR – nevertheless expressing their reservations about certain treaty restrictions. Which could be dangerous, as some claims overlap – notably between Chile, Argentina and the UK. The latter two countries already went to war over the nearby (but non-Antarctic) Falkland Islands in 1982.

A Brazilian geostrategist Therezinha de Castro proposes a different way of divvying up the South Pole – a method which of course is more beneficial to Brazil’s as yet unrecognised Antarctic claims, but which would also eliminate the inherent danger of overlapping claims. It goes like this: all non-South American nations withdraw their claims and bases from the South American sector of Antarctica (from 0°W to 90°W), and this sector is divided among the South American nations according to the principle of defrontação, or frontage. This principle equates ‘open sea’ access to Antarctica via meridional lines with a legitimate claim. This would diminish the Chilean and Argentine sectors; give Uruguay, Peru and Ecuador a slice; and would give Brazil the biggest sector.

On reading an Economist article about British territorial claims in Antarctica, Paul Youlten recently came up with a similar idea. “The useful little map (included in the article) got me wondering about which other countries might also lay claim to a slice of Antarctica based on their having un-restricted southern passage across open seas to the continent.”

He applied the ‘frontage’ principle not just to South American claims, but to the whole world. For a bit more about the sources and methods used by Paul Youlten, please click here.

The Youlten method of frontageing provides no less than 47 countries with a claim to Antarctica.

“Unexpected results include the surprising news that Somalia, Yemen and Oman could make claims,” says Mr Youlten. “As well as Iran, which I suspect might be tempted to set up an ‘Icelamic Republic’ – sorry, I couldn’t resist that one.” 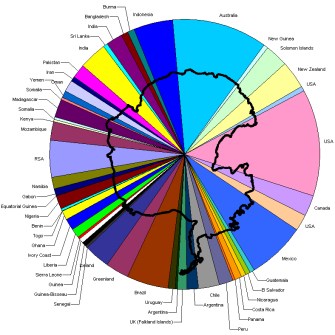 (*) even though the Norwegian claim is only defined east-west, not north-south, and therefore in theory does not extend all the way down to the Pole itself.

Related
Starts With A Bang
NASA’s Habitable Worlds Observatory to finally answer the epic question: “Are we alone?”
NASA has finally chosen which flagship mission, like Hubble and JWST, will launch in ~2040. Detecting alien life is now a reachable goal.
Health
The scientific highs and lows of cannibinoids
Hundreds of these cannabis-related chemicals now exist, both natural and synthetic, inspiring researchers in search of medical breakthroughs.
Strange Maps
The horrors of World War II air war, in one stark map
This graph shows how badly German cities were hit by Allied bombing raids.
Hard Science
Subatomic ghosts shed new light on the structure of protons
A Fermilab study confirms decades-old measurements regarding the size and structure of protons.
The Present
The Taoist philosophy behind Alibaba, China’s e-commerce giant
Alibaba has played a key role in China’s meteoric economic rise.
Up Next
Strange Maps
A Map of the Ideal City, Anno 1951
Looks a bit sterile