Mid-20th century British illustrator Ronald Lampitt had a predilection for maps. It probably was no coincidence that he got to draw, in the Illustrated Magazine of 17 February 1951, the proposal of John Sleigh Pudney for an ideal city.

Pudney (1909-1977) was a prolific British journalist and writer (despite leaving school at 16), memorable for his short stories, his wartime poem For Johnny (1941) and his BAFTA-winning documentary ‘Elizabeth is Queen’ (1953). In the aforementioned article, he proposes his vision:

“In this age of planning it is surely time that some innocent traditionalist thrust his way forward to offer mankind the ideal city. Whose ideal? goes up the snarl from the idealists. Ideal for what? chorus the realists. Ideal against whom? demand the tacticians. Why a city? moan the simple-lifers. Allow me for a moment to toy with dreams, taking a holiday from the magic of the materialists. The ideal city which I shall venture to plan must be controversial: for it is myself of whom I am thinking rather than of humanity in general. I have the vice, before my ink is dry, of all planners. I have a sneaking notion already that what is good for me must be good for the rest of mankind.”

That nameless city under Lampitts brushstrokes becomes a spacious, undulating seaside paradise of a place, populated with monuments that look vaguely familiar. Which is because they are; they’re architectural icons from all over the world – the western world, that is. And yet, this ideal city looks suspiciously sterile: no rubbish tips, no shantytowns, no shopping malls, no advertising… Here follows a list of buildings referenced at the bottom of the map. 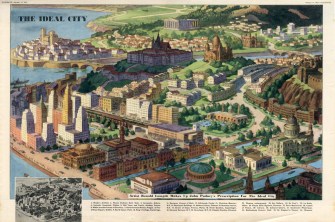 The map was found here, in the intriguingly idiosyncratic graphic collection at fulltable.com. Pudney’s article is here.

An amazing feat of engineering, but at the cost of much blood and treasure