Funny how something as arbitrary as map orientation can skew the perception of countries. On this map, from the vaults of the  Perry-Castañeda Library Map Collection at the University of Texas in Austin (and to be found separately here), the Indian Subcontinent is shown ‘upside-down’: South is top of the map, North is bottom. Consequently, East is left and West is right (otherwise the map would be mirrored).

The island-nation of Sri Lanka (formerly known as Ceylon) dominates the top of the map– and suddenly seems more like the jewel in the crown of the subcontinent, less like an appendage of its larger neighbour India.

Bangladesh seems more like the sinkhole for some big rivers that it actually is, and India appears to have a vice-like grip on the Chineseterritory of Tibet: the trans-Bangladeshi part of India doesn’t so much seem to be a drifting piece of territory as one half of the aforementioned vice. 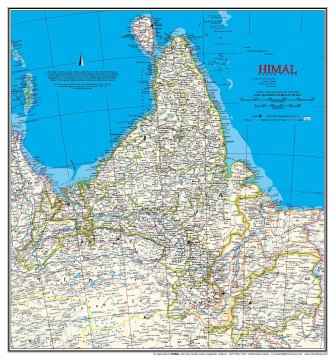 But that’s just my utterly fanciful interpretation. The map was devised by Himal, a weekly magazine in Kathmandu (Nepal) that seeks to restore some of the historical unity of ‘Southasia’ (sic): “We believe that the aloof geographical term ‘South Asia’ needs to be injected with some feeling. ‘Southasia’ does the trick for us (…)”

On the ‘right side map’ itself, Himal explains: This map of South Asia may seem upside down to some, but that is because we are programmed to think of north as top of page. This rotation is an attempt by the editors of Himal (the only South Asian magazine) to reconceptualise ‘regionalism’ in a way that the focus is on the people rather than the nation-states. This requires nothing less than turning our minds downside-up.