The Free State of Bottleneck, a Bizarre By-product of Allied Occupation

Squeezed in between two occupation zones, the locals opted for independence - and smuggling. 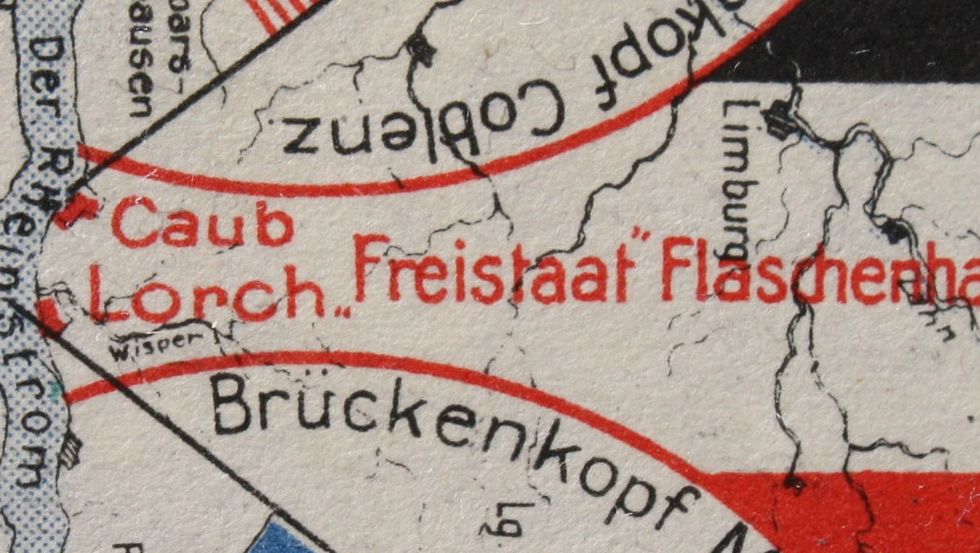 In course of the 20th century, Allied forces occupied Germany not just once, but twice. The better-known (and longer-lasting) occupation took place in the decades after World War II. The lesser-known one occurred after World War I. For a few years after 1918, British, French, American and Belgian forces took up positions in the Rhineland, wholly occupying the area west of the river Rhine – but eventually also some areas on the Rhine’s right bank.

One of the unintended consequences of that expansion of Allied military sovereignty over the Rhine was the creation of the so-called Freistaat Flaschenhals, literally translated: the Free State of Bottleneck, after its geographic shape. This miniature quasi-state existed for just a bit over four years, from 10 January 1919 until 25 February 1923.

Map of the Bottleneck, in between Bacharach, Nassau and Schlangenbad (literally: Bath of Snakes). Image found here.

Flaschenhals came into being after the Allies extended their jurisdiction in a 30-km radius from the Rhine-side cities of Cologne (UK), Koblenz (US) and Mainz (France). Because of the proximity of Mainz and Koblenz, the US and French ‘circles’ of occupation across the Rhine almost but not quite overlapped. The resulting bottleneck-shaped area between both circles contained the Wisper valley, which comprises the towns of Lorch and Kaub, and the villages of Lorchhausen, Sauerthal, Ransel, Wollmerschied, Welterod, Zorn, Strüth and Egenrod.

The Wispertal wasn’t just hemmed in on two sides by the American and French zones of occupation, but also cut off from the rest of unoccupied Weimar Germany by the Taunus mountain-range in the east. Thus effectively left to fend for themselves, the approximately 8,000 people of the Wisper Valley declared their independence in early 1919, proclaimed Lorch its capital and elected the mayor of that largest city in the valley its president. Herr Präsident Pnischneck oversaw the administration of the ministate, which even produced its own stamps, currency and passports.

Since transportation by land, air and water was impossible and trains were not permitted to stop in Flaschenhals, the main source of income of the ministate was smuggling. At one time, this even involved hijacking a French coal train in nearby Rüdesheim and driving it to Flaschenhals, where the contents were distributed among the population.

Flaschenhals felt confident enough to draw up plans for an embassy in Berlin. The Free State was abolished before this could happen. Following the French occupation of the Ruhr area in 1923, Flaschenhals was eventually reincorporated into the Prussian province of Hesse-Nassau.

The history of the Flaschenhals may not be widely known outside the area itself, but there it is an added tourist attraction, mainly in the towns of Lorch and Kaub. Not that tourists are scarce in the area, which is part of the Unesco World Heritage Site of the Rhine Gorge.