For at least 10.000 years, the animal known to taxonomists as Felis silvestris catus has been among the dearest friends of Homo sapiens sapiens. Their tendency to hunt rats, mice and other vermin earned them the most-favoured pet status.

Contributing to their popularity with early farmers is the fact that cats are strict meat-eaters, passing over the precious harvest of grain and other vegetables. Cats are known to hunt over 1.000 different animal species for food. The Egyptians venerated the mythical cat Bast as goddess of the home and protector of the fields and home from vermin.

Nowadays, for many people, cats are even more familiar than gods: they’re full members of the household. Through thousands of years of domestication, cats have grown accustomed to people, and demonstrate certain pseudo-human traits. They’re pretty fussy eaters, for starters, sometimes starving themselves rather than eating food they don’t like. And they can appear rather lazy, sleeping on average 13 to 14 hours a day – sometimes even up to 20 hours. Not really a ‘cat nap’, is it?

Anybody who’s ever had a cat can testify to the fact that cats, while at times very friendly, cuddly and agreeable to people, in essence are solitary animals with an agenda of their own. To some exasperated owners, returning home after a hard day’s work to find the cat still curled up in the same place as when they left for the office, the question may arise: who is who’s pet? That’s sort of the attitude expressed in this cartoon map, which shows what cats really make of the bed of their ‘owners’. 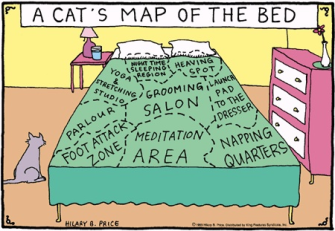 To conclude, here are 10 things you didn’t know about cats (unless you’re a cat fancier):

1.Cats don’t have a clavicle bone, allowing them to pass through any space no bigger than their head.

2.Cats move both legs on one side, and then both leg on the other, a trait they share with camels, giraffes and a select few other mammals. Nobody knows what the connection is, if any.

4.Most cats have five claws on their front paws and four or five on their rear paws, but cats are prone to polydactyly. Famously, the cats hanging around Hemingway’s house in Key West are six-toed.

5.Cat’s night vision is superior to humans, but their day vision is inferior.

6.The official name for cat’s whiskers is vibrissae.

7.Due to an ancient mutation, cats can’t taste sweetness.

8.Blue-eyed cats with white fur have a higher incidence of genetic deafness.

9.Cats expend nearly as much fluid grooming as they do urinating.

10.Cats will almost never meow at other cats; that sound is reserved mostly for communication with humans.

And because you didn’t know this either, here are 10 famous cats from history:

1.Boche: cat found by Anne Frank’s family while hiding in the attic in Amsterdam (name is a derogatory French term for German, comparable with ‘Kraut’). Would always pick (and lose) fights with another cat, aptly named Tommy.

3.Kaspar: wooden cat used to round out unlucky parties of 13 at the Savoy Hotel in London.

4.Oscar: hospice cat with uncanny ability to predict which patients will die by curling up with them hours before their death. Recorded in the New England Journal of Medicine in mid-2007, when he had been right 25 times.

5.Sir Isaac Newton’s cat: its incessant desire to be let in and out allegedly drove Newton to invent the cat flap.

6.Siam: a gift from the American consul in Bangkok to US president Rutherford B. Hayes, the first Siamese cat in the US (1878).

7.The Master’s Cat: belonged to Charles Dickens, and would snuff his reading candle to get attention.

8.Muezza: the Prophet Mohammed’s cat. He once cut off the sleeve of his robe when called out to prayer rather than disturb the sleeping cat upon it, or so it’s related.

9.Sizi: Albert Schweitzer’s cat when he lived in Africa; although he was a left-hander, he would write with his right when Sizi slept on his left arm.

10.Taki: black female Persian cat of Raymond Chandler, who considered her his ‘feline secretary’ – he would read out the first drafts of his murder mysteries to her.

The map came from here at Catster.