Although also very popular in East Asia and in other parts of the American continent, baseball is the quintessential North American sport, early in the 20th century even labelled the ‘national pastime’ of the USA. It remains so today: in the US, the words ‘ballgame’ and ‘ballpark’ automatically refer to baseball, not to any other sport.

To the disinterested outsider, baseball shares some vague similarities with cricket – not a coincidence, since baseball is an 18th-century development out of earlier bat-and-ball games popular with British immigrants, such as ‘rounders’. This origin is somewhat disputed: some evidence exists for a British game also called ‘base-ball’, as in British novelist Jane Austen’s ‘Northanger Abbey’ (written circa 1800), where some children play it on a village green.

Nowadays, professional baseball in North America is organized in Major League Baseball, composed of the National league (°1876) and the American league (°1901). Both are divided in to Eastern, Central and Western divisions. The game has – or had – a mainly eastern following: the first major league teams on the West Coast were ‘transplants’ from Back East: the Brooklyn Dodgers moved to LA and the New York Giants to San Francisco in 1958. In 1961, the first ‘original’ West Coast team was founded: the LA Angels.

This map, indicating all teams in the National and American sub-leagues of Major League Baseball, translates some of the American obsession with baseball into a representation of the supposed ‘countries’ of baseball. As with many other team sports, the fan base of baseball teams is to a large extent regional. Unless you’re of a contrary nature, you support the local team – barring of course that you move, and continue to support your home team as a kind of sentimental link with your place of origin.

Here’s an overview of the ‘countries of baseball’, first of the National League:

These teams play in the American League: 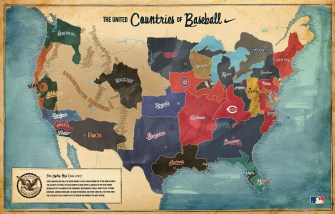 This map was first sent to me by Lee I. Garnett. This version found here.