The British tried their hand at subduing Afghanistan in the 19th Century, when the Empire was at the top of its game. Their troops were massacred (with one man left alive to warn off other invasion attempts), which the British found in rather bad taste.

This never gave them the opportunity to turn the country into “Edwardistan”, as shown in this parody of both the naivety and the arrogance of British Imperialism – or, more truthfully, its outer limits… 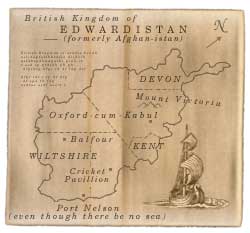