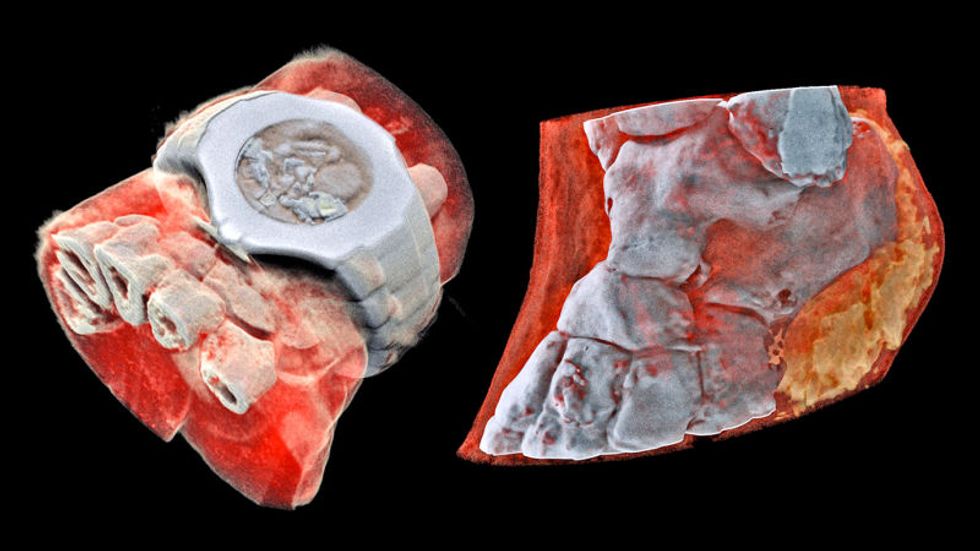 Phil and Anthony Butler, a father and son team in New Zealand who teach physics and bioengineering, respectively, have been developing the technology for a decade through their company MARS Bioimaging. The scanner uses hybrid-pixel technology called Medipix3, which was initially developed for the Large Hadron Collider.

“The original concept of Medipix is that it works like a camera, detecting and counting each individual particle hitting the pixels when its electronic shutter is open,” reads a statement from CERN “This enables high-resolution, high-contrast, very reliable images, making it unique for imaging applications in particular in the medical field.”

Traditional X-rays produce a black image when passing through soft tissue and a white image when absorbed by denser bone material. The Medipix3 detector, however, “is able to measure how specific energies of X-rays are being attenuated” and can differentiate between bone, muscle, metal, fats and liquid. This level of sensitivity enables the technology to produce a strikingly realistic representation of the internal body.

“This technology sets the machine apart diagnostically because its small pixels and accurate energy resolution mean that this new imaging tool is able to get images that no other imaging tool can achieve,” Phil Butler said in a CERN news release.

“In all of these studies, promising early results suggest that when spectral imaging is routinely used in clinics it will enable more accurate diagnosis and personalization of treatment.”

The technology could also expand the scope of conditions that imaging procedures are able to diagnose, including cancer and joint health. For now, the father-son team plans to test their scanner in a trial focused on orthopedic and rheumatology patients in New Zealand, though it will likely be years before the technology is approved for widespread use.