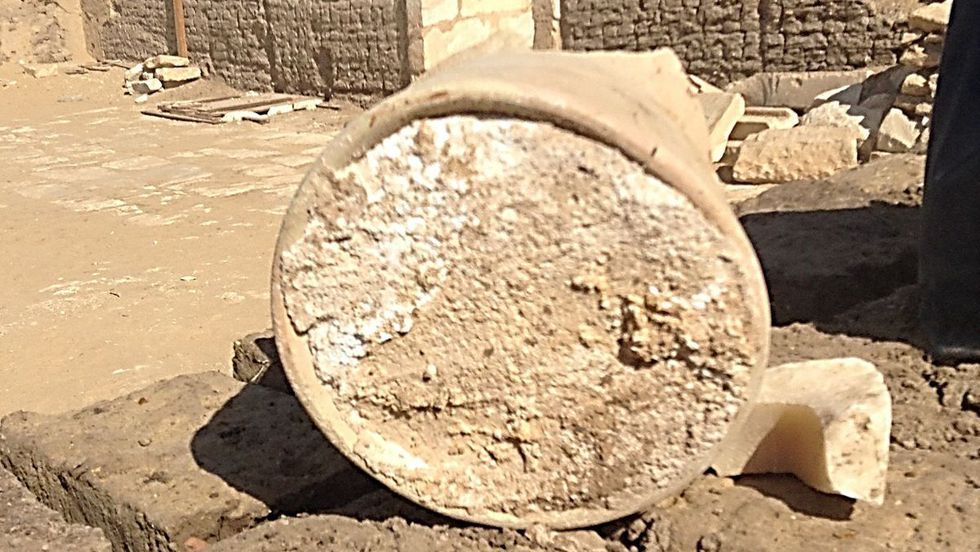 The broken jar in which the white mass of cheese was found. (Photo: University of Catania and Cairo University)

The tomb that held the cheese lies in the desert sands south of Cairo. It was first discovered in the 19th century by treasure hunters, who eventually lost the knowledge of its location, leaving the Saharan sands to once again conceal the tomb.

“Since 1885 the tomb has been covered in sand and no-one knew about it,” Professor Ola el-Aguizy of Cairo University told the BBC. “It is important because this tomb was the lost tomb.”

In 2010, a team of archaeologists rediscovered the tomb, which belonged to Ptahmes, a mayor and military chief of staff of the Egyptian city of Memphis in the 13th century B.C. In the tomb, the team found a jar containing a “solidified whitish mass,” among other artifacts.

“The archaeologists suspected [the mass] was food, according to the conservation method and the position of the finding inside the tomb, but we discovered it was cheese after the first tests,” Enrico Greco, the lead author of the paper and a research assistant at Peking University in Beijing, told the The New York Times.

To find out what the substance was, the team had to develop a novel way to analyze the proteins and identify the peptide markers in the samples. They first dissolved parts of the substance and then used mass spectrometry and chromatography to analyze its proteins.

Despite more than 3,000 years spent in the desert, the researchers were able to identify hundreds of peptides (chains of amino acids) in the sample. They found some that were associated with milk from goat, sheep and, interestingly, the African buffalo, a species not usually kept as a domestic animal in modern Africa, as Gizmodo reports.

Those results suggested that the substance was cheese, specifically one that was probably similar in consistency to chevre but with a “really, really acidy” taste, as Dr. Paul Kindstedt, a professor at the University of Vermont who studies the chemistry and history of cheese, told the The New York Times.

“It would be high in moisture; it would be spreadable,” he said. “It would not last long; it would spoil very quickly.”

The researchers also found traces of the bacterium Brucella melitensis, which causes brucellosis, a debilitating disease that can cause endocarditis, arthritis, chronic fatigue, malaise, muscle pain and other conditions. It’s a disease usually contracted by consuming raw dairy products.

“The most common way to be infected [with Brucella melitensis] is by eating or drinking unpasteurized/raw dairy products. When sheep, goats, cows, or camels are infected, their milk becomes contaminated with the bacteria,” the U.S. Centers for Disease Control wrote on its website. “If the milk from infected animals is not pasteurized, the infection will be transmitted to people who consume the milk and/or cheese products.”

Dr. Kindstedt said one reason the study is significant is for its novel use of proteomic analysis, which is the systematic identification and quantification of the complete complement of proteins (the proteome) of a biological system.

“As I say to my students every year when I get to Egypt, someone has to go ahead and analyze these residues with modern capabilities,” he told the The New York Times. “This is a logical next step and I think you’re going to see a lot more of this.”

However, Dr. Kindstedt did offer a bit of caution on the conclusions the researchers drew from the findings.

“The authors of this new study did some nice work,” he told Gizmodo in a statement. “But in my view, on multiple grounds (I suspect in their zeal to be “the first”), they inferred considerably beyond what their data is capable of supporting within reasonable certainty, and almost certainly they are not the first to have found solid cheese residues in Egyptian tombs, just the first to apply proteomic analyses (which is worthy achievement on its own).”