When is failure a good thing? Is it ever? What kind of madman would run a business on the mindset that all attempts to fail must be made as quickly as possible, as only then could they succeed?

Dr. Teller holds a Phd in artificial intelligence, is a recipient of the prestigious Hertz Foundation Fellowship, and has made a career of turning science fiction into science fact. In his current work, he keeps the focus of his staff both high and low, shooting for the moon with both feet on the ground. It is the combination of thinking big and having concrete plans that he attributes his success to.

But why would someone view failure as a key tool, in the world of R&D no less?This answer is surprisingly simple. To find the real problems and learn from them…

“We spend most of our time breaking things and trying to prove that we’re wrong. Run at all the hardest parts of the problem first. Get excited and cheer, ‘Hey! How are we going to kill our project today?’ We’ve got this interesting balance going where we allow our unchecked optimism to fuel our visions. But then we also harness enthusiastic skepticism to breathe life, breathe reality into those visions. Instead of saying, ‘What’s most fun to do about this or what’s easiest to do first?’ we say, ‘What is the most likely reason this project won’t make it?'” – TED Talk

This is how X was able to help devise Google’s self driving cars and create the Google glass. However, the principle of “Moonshots” has also led Teller to oversee investigations into the feasibility of space elevators, hoverboards, jetpacks, and teleportation, all of which got a “no” for now. Not because they are impossible (except for teleportation; they ruled that one out), but because they are currently unfeasible; as soon as they can be done watch out for the moonshot team at X.

Of course, Dr. Teller is most at home with AI, and he sees a great future for it. Not in the 1950s metal-man-in-your-kitchen kind of way, but in learning and responding to the massive amounts of data that now quantify nearly every system on Earth — from your personal exercise routine to international supply routes to climate change data. 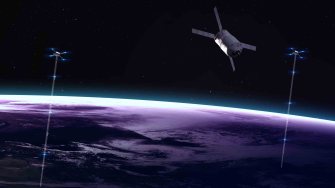 Earth image with space elevators. Elements of this image furnished by NASA. (Shutterstock)

“You already have a robot in your house that washes dishes. I’m sorry that it doesn’t look like a mechanical man, but you do—it’s called a dishwasher. I’m more interested in using technology to get your dishes washed to get you more time than I am in whether it looks like the kind of robot that you have in your fantasy. Because our lives are already awash in things that have the three components that fundamentally determine something to be a robot: Sensing, computation, and actuation. It has to be aware of the world, has to think about the world, and has to do something back to the world. People haven’t caught on to the fact [that] 99% of commercial airlines are flown by computers. People are totally unaware of that. I think there’s a lot of AI that we continue to benefit from without people realizing it.” – Forbes interview.

Teller’s visions of the future do not stop at R&D. He also takes an interest in the social norms we take for granted — private property, for instance — and how to improve them dramatically to benefit us all. He asks us to think about that old box of tools we have under the sink, and to try to remember when we last used it:

“You have a hammer in your home. You probably have a power drill. You use it one-10,000th of the time, maybe one-100,000th of the time. If that hammer was sitting in some central location, it could be shared by thousands of people, really safely, making everybody wealthier functionally because they would get the hammer when they need it without having to pay for the hammer and drain the world’s resources by making all of these hammers that go almost entirely unused. If we could move from an ownership society to an access society where having it now wasn’t important… [but] having it when you need it, it would really dramatically, magically, change the world.” – The Verge Interview

His suggestion, that we move from an ownership economy to a sharing economy, requiring only reliable access to items, is akin to other proposals — like a universal basic income — that follow from technology’s radical impact on our society. Teller’s proposal, however, becomes more interesting when coupled with the Wing project moonshot: imagine a world where automated drones can deliver that hammer you need right to you, then take it to the next handyman in need!

Thanks to the method of searching for failure in his moonshot oriented R&D office, Dr. Teller is likely to make that world a reality. 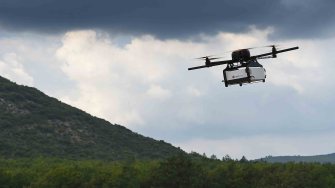 Geopost drone flying in Pourrieres, southeastern France, during a presentation of a prototype of a package delivery drone. Geopost is a branch of the French La Poste group. (BORIS HORVAT/AFP/Getty Images)

Related
Life
Scientists use CRISPR to insert an alligator gene into a catfish
Disease kills off 40% of farmed catfish. This gene protects them.
Neuropsych
How you breathe affects your brain
Your breathing rhythm influences a wide range of behaviors, cognition, and emotion.
Health
What happens when regular porn watchers abstain for a week?
Researchers watched for signs of withdrawal — but didn’t find any.
Neuropsych
Daily caffeine intake temporarily alters your brain structure
Compared to people who took a placebo, the brains of those who took caffeine pills had a temporarily smaller gray matter volume.
Thinking
Why you should laugh at yourself, according to Seneca and Nietzsche
“It is more human to laugh at life than to lament it.”
Up Next
Surprising Science
Researchers believe depression once offered humans an evolutionary advantage
Genetic, immune, and neurological components point to evolutionary underpinnings.