Startups have become the new engine for growth in our economy. By creating jobs and coming up with novel solutions for a wide range of problems, these companies play an important role in putting millions to work and changing the fabric of our day to day lives. With such an integral role in our society and on the way we do business, it’s pivotal that business leaders and startup founders make diversity and inclusion a priority.

Diversity creates opportunities for an upstart company. In a chaotic and fast-paced environment, being able to capitalize on the full potential of a diverse group of people will set many startups leagues ahead of their competitors. It’s not just a matter of principle in an increasingly diverse society, it’s smart business sense too.

Diversity from the get-go

Unique differences that come from various cultural, gender and ethnic backgrounds help break down silos and create an environment with many viewpoints. Fostering diverse hiring and inclusivity from the start is an important step to ensure it’s built into the company culture right away.

Companies can fall into the trap of setting up programs as afterthoughts or they can wait too long to create a diversity initiative. Building a culture of diversity starts from the top down. As the Great British Diversity Experiment found, it’s “action at the upper echelons of our industry” that models behavior and leads to lasting change. An early initiative from leadership can set the company’s mission, encourage individual responsibility in fulfilling that mission, and ultimately grow a more creative workplace.

There is evidence to show that being exposed to varying viewpoints leads to greater creativity within a team. Sometimes we take it for granted that different technical, emotional and creative perspectives are needed to solve complex problems, but research is also beginning to show that social diversity works in a similar way.

In a study conducted by the Credit Suisse Research Institute team, researchers examined 2,360 companies between 2005 and 2011. They were looking for a relationship between gender-diverse corporate management teams and financial performance, and what they found was that when there were one or a few women on the board, the companies delivered higher and more profitable returns on equity and had better growth prospects as a company. 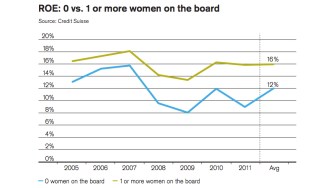 As Credit Suisse reports, “Net income growth for companies with women on the board has averaged 14% over the past six years compared to 10% for those with no female board representation.”

Just the act of interacting with people from different backgrounds is beneficial as it leads to greater business opportunities. Unfortunately, this is not always prevalent in the startup field. Researchers in 2017 found that only 17% of startups have been founded by women. Nearly 40% of female founders encountered sexism and gender discrimination in their business.

The world is going through a seismic shift because of the advent of smart technology and scalable innovations, most of which are coming out of startup culture. Women and underrepresented minorities need to have a part in the creation of new technologies so products and services cater to all demographics, and so that blind spots (like racist and sexist A.I.) are discovered sooner rather than later.

In that respect, startups can learn something important from corporate America. Sallie Krawcheck, former President of Global Wealth at Bank of America and current CEO and founder of Ellevest, shares how lack of diversity on Wall Street led to one of America’s largest crises:

“There is no doubt in my mind that the financial crisis that the United States and the world suffered would have been less severe if we’d had more diversity on Wall Street,” she tells Big Think. “There’s no doubt. We know this intuitively. If all of us think about those cavernous trading floors where the individuals populating the trading desks looked the same, that if those had been incredibly diverse, sort of the United Nations of every different kind of person you could have, we intuitively know that the crisis would have been less severe. We intuitively know that if there were more women at the senior leadership tables that the crisis would have been less severe. And not only do we know it intuitively, the research tells us this. The research tells us that homogenous teams tend to over-trust each other.”

The current state of startups

The U.S. Bureau of Statistics reports that the STEM workforce in the United States is projected to grow 17% in the next decade, compared to other industries that are only going to see an increase of 12%. If startup and technical jobs are set to increase at that rate, you have to wonder why more women and minorities are not seeking out these careers. The answer is that lingering biases remain, both implicit and overt, and many diverse workers often end up leaving the field early on.

A study by Jennifer L. Glass titled ‘What’s So Special about STEM? A Comparison of Women’s Retention in STEM and Professional Occupations’, found that after 12 years, half of the women in the study switched to other fields, evidence that points to a systemic problem in the culture.

The challenge may not only be hiring more diverse people but also making sure they don’t leave at higher rates. Studies have shown that women in these fields are “less satisfied with their careers, perceive that they are less likely to advance at their current organizations, or believe they must change jobs in order to reach the next level.”

Unfortunately, this is because a safe and inclusive work environment is not on the list of priorities for a lot of companies. Recent data published by venture firm First Round Capital found that of 869 startups, half of their founders have been harassed in some way or are aware of somebody who has. Despite the rising reportage and dialogue around harassment, only a small percentage of startups have a strategy in place to promote diversity and inclusion; 58.4% of the 869 startups surveyed claim they have a D&I strategy but “nothing formal”, and 24.5% have no D&I strategy in place at all. 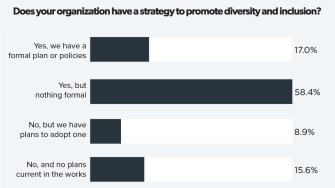 Steps toward creating a thriving atmosphere

Building a diverse company is not a simple endeavor, but small actions throughout the company can lead to meaningful results.

The first thing to do is to assess whether a startup is already diverse or it has intentions to go in that direction. Here’s a practical list of questions and ideas to think about when determining diversity.

Another key question for companies who value diversity is: Do we also value inclusivity? The two terms are used interchangeably but they aren’t the same. Recruiting diverse talent into a place they feel like they don’t belong will have a negative effect; the two concepts go hand in hand.

These small but potent questions and efforts can show a lot about where a startup places its priorities. For example, Amway has a “real talk” open communication channel that goes a long way in inspiring people to ask questions, challenge their assumptions and allow for deeper talks to take place.

How do you know if your programs are working? Get data. Digital marketing startup MatchCraft runs an anonymous internal survey on D&I every quarter: “We also survey employees… to ensure that we are keeping our finger on the pulse and inspire diversity through anonymity for those who don’t feel comfortable speaking up on company practices,” Nicole Webb, Head of People and Culture, tells Built in LA. Webb continues: “We’ve seen increasingly positive feedback in our employee happiness index surveys as MatchCraft grows and continues to evolve.”

As the startup space grows and increasingly becomes more responsible for the future of work and innovation, the corporate setting must change with the times. When diversity is encouraged, everybody wins.

Related
13.8
What kind of intelligence is artificial intelligence?
The initial goal of AI was to create machines that think like humans. But that is not what happened at all.
The Present
What’s effective altruism? A philosopher explains
Some effective altruists “earn to give” — they make as much money as they can and then donate most of it to charities.
Sponsored
How to avoid family fights about money
No family is immune to money conflicts, no matter how much they love each other. Here’s what to look out for.
L&D strategy
Best practices for a needs analysis [Templates included]
Conducting a thorough needs analysis requires care, curiosity, and open-mindedness.
Neuropsych
Memory and the benefits of forgetting
Forgetfulness isn’t always a “glitch” in our memories; it can be a tool to help us make sense of the present and plan for the future.
Up Next
Politics & Current Affairs
Why psychiatrists are calling on the APA to end its controversial ‘Goldwater Rule’
Some psychiatrists want the American Psychiatric Association to end its controversial Goldwater Rule, which prohibits members from airing opinions on the mental health of public figures.