Today is the big day. The first Amazon Go store has opened to the public in Seattle, and the future of shopping may change forever. While we all love the convenience of having the products of the world shipped right to our door, this store is Amazon’s attempt to branch out and sell us those goods that we would rather pick up off the shelf like sandwiches, drinks, and cupcakes.

The store is different from any other store in existence in one way above all others; there are no cashiers, checkout lines, or even cash registers. Customers are required to use the Amazon Go app to enter the store as a form of digital identification. Items you place in your bag are automatically charged to your account the moment you walk out the door. That’s all there is to it. The system keeps track of who has placed what items in their bags with an extensive array of cameras and sensors.

There are humans working in the store too, but not many. One reporter noted that there seemed to be six of them; one greeter, a person to check IDs for liquor sales, and a few cooks preparing food. The rest of the store is completely automated. 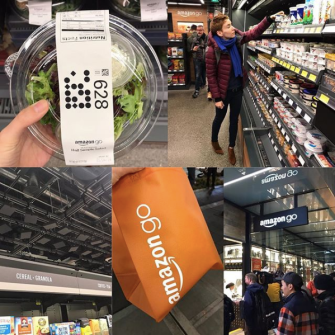 Suppose I was to try to rob the place?

Shoplifting appears to be no issue, as a New York Times reporter found out when they triedto covertly walk out with a four-pack of soda—you know, for the sake of journalism. They were still automatically charged as they carried it out the door. It also appears that entrance to the store without an Amazon Go account is impossible, leaving those without the app unable to try to shoplift either.

What kind of potential does the store have? What do customers think?

Thus far, Amazon executives have no intentions to open another such store nor to franchise the concept to other operators. However, the potential for both options is self-evident. The Twitter response is positive, although the specter of automation does worry a large number of people. The store may spell trouble for the 3.5 million Americans employed as cashiers, who would join the millions of people rendered unemployed by automation if this model of convenience store were to become the new normal.

Will cashiers and checkout lines be gone in ten years? Perhaps, perhaps not. The potential for the Amazon Go store to fundamentally change the shopping experience does exist, and the possible ramifications are extensive. As it is only day one for this brave new world we may have to wait and see. Luckily, we don’t have to wait in a checkout line.

The holograms use 'aerohaptics', which creates feelings of touch with simple jets of air.
Up Next
Culture & Religion