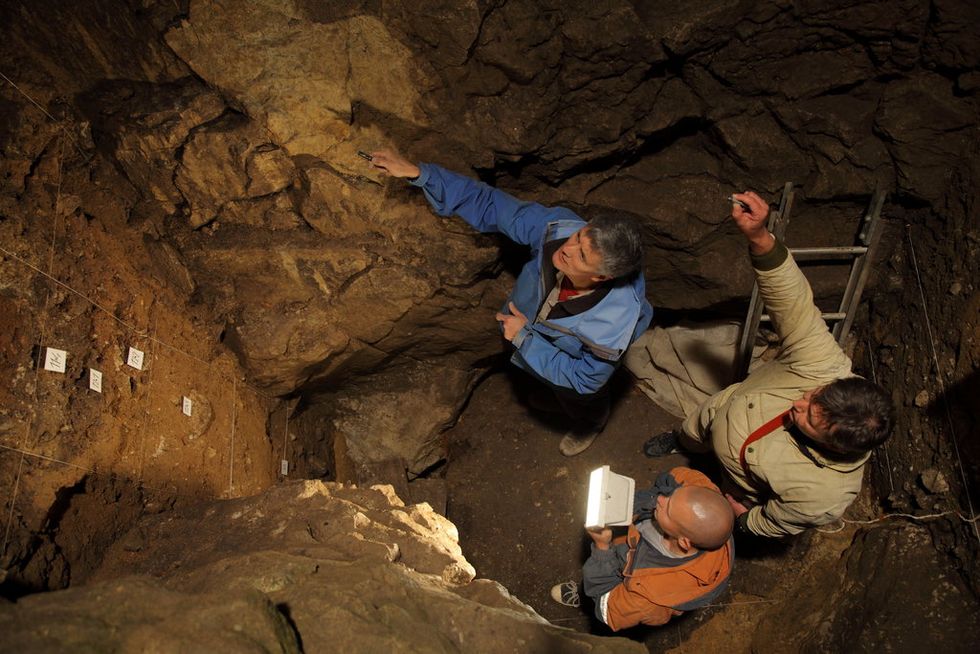 Researchers in a chamber of the Denisova cave in Siberia, where the fossil of a Denisova 11 was discovered. CreditIAET SB RAS, Sergei Zelensky

Her remains were discovered by a team of researchers this past summer. In a study published in Nature, the details of the discovery and the implications it has on our understanding of human evolution are explained.

A hybrid who and what?

We Homo sapiens aren't the only species of human to have walked the earth, and only recently have we lacked the company of our evolutionary siblings, the Neanderthals and the Denisovans. While the former is rather famous the later is nearly unknown.

This might be because we only discovered the Denisovans in 2010 and have so few fossils to work with that we don't even know what they looked like. We're not quite sure when they faded away, but it is probable that they vanished around the same time the Neanderthals did, 40,000 years ago.

What do we know about this girl?

Denisova 11, the rather dull name the researchers have given the hybrid human, is the fifth Denisovan ever found, which makes the fact she was a hybrid all the more fascinating. A small bone fragment is all we have of her, or the other members of her species for that matter. We know she had parents of two different species and lived in a cave with several members of both species.

This image from the study, which explains itself in the caption, shows the location of the human ancestors whose DNA has been analyzed. Of these few individuals, two are known to either be hybrids or to have had close relatives of a different human species. (Slon et al.)

How do we know she was a hybrid?

During DNA sequencing of the bones discovered at the site, the researchers noticed that half of the chromosomes in Denisova 11 were similar to those of the other Denisovans and half of them were closer to those of the Neanderthals. Initially, Viviane Slon, a graduate student involved with the study thought that she must have made a mistake. However, after the hybrid hypothesis was suggested, the DNA evidence became “good proof that this was real," she explained.

The researchers looked at the mitochondrial DNA, which can only be inherited from your mother, to determine which parent belonged to which species. This is how we know Denisova's mother was a Neanderthal and her father was a Denisovan.

Were there other hybrids?

In 2015, scientists found the 40,000-year old remains of a modern human who had a Neanderthal for a great-great-grandparent. The discovery of two individuals with blended DNA in the small group of ancient humans scientists have tested so far suggests that more will be found.

We also know that people from pretty much everywhere but Sub-Saharan Africa have either Neanderthal or Denisovan DNA mixed into their genome, with variations of which and how much varying with geography. You, dear reader, probably have a Neanderthal in your family tree!

What does this mean for human evolution?

This could pose a problem for the scientists who wish to explain away the discovery of Neanderthal or Denisovan DNA in modern humans by claiming it merely comes from a recent common ancestor, as we now have direct evidence of interbreeding between two of the groups.

Finding a hybrid specimen amongst other archaic species suggests that interbreeding was either common or didn't strike the two groups as odd. This could end up supporting the idea that both the Neanderthals and the Denisovans interbred with humans to the point where they ceased to exist as a species, though further evidence is needed before that can be proven.

We're not the only humans to have existed on this planet. In the not too distant past, we shared Eurasia with some close evolutionary cousins. Why they died out we cannot say, but this discovery helps shed light on these mysterious relatives of ours.