DNA analysis reveals the Taino people who welcomed Columbus to the New World were not eradicated after all. 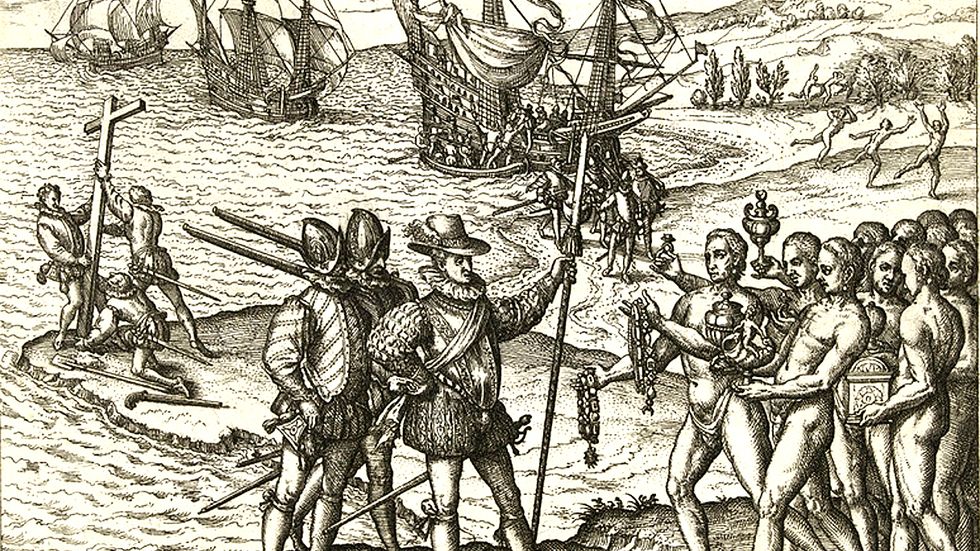 There goes the neighborhood.

When Columbus arrived, the Caribbean islands were populated by people known now as the “Taino." Most likely they were descendants of the Arawaks of South America, and Taino was actually just their language — at the time, they were known as Lucayans locally in the Bahamas, Greater Antilles, and the northern Lesser Antilles areas they dominated. They courteously greeted Christopher Columbus when he landed in the New World, but within 30 years, according to Spanish accounts, the Taino were all gone, victims of European pathogens — smallpox in particular — and the brutality of the newcomers. Locals have long insisted that this isn't true, that they were simply written out of history. Now a DNA analysis reveals the locals were right, and at least one modern Caribbean population includes Lucayan Taino descendants. DNA was extracted from a Lucayan Taino woman who lived about 1,000 years ago according to radiocarbon dating, or about 500 years before Columbus appeared. (Researchers believe her people arrived in the area some 2,500 years ago.) As can happen when serendipity's at play, she was found by researchers looking for something else entirely.

After a shipwreck at Devil Backbone off the Bahamian island of Eleuthera in the 1600s, Captain Willam Styles and his crew and passengers found shelter in a cave Bahamians call “Preacher's Cave."

In the early 2000s, archeologists began digging there to learn more about these seafarers and were surprised to unearth artifacts and intact burial sites from long before Sayles. With low expectations due to the fragile nature of DNA in hot, humid environments, DNA researcher Hannes Schroeder examined five teeth from the cave and found a single tooth from a female that had sufficient DNA for sequencing. Schroeders' team was able to sequence each of the tooth's nucleotide bases to an average depth of 12.4-fold, giving them an unprecedented view of the “long-lost" Taino population. The researchers found evidence that the Lucayan Tainos had likely originated with the Arawaks of northern South America. They also saw none of the telltale signs of inbreeding, suggesting she belonged to a large population that that wasn't constrained to tiny Eleuthera but instead extended across the larger Caribbean region.

Most exciting was that researchers were able to document components of the woman's genome in modern Caribbean populations. Puerto Rico became an area of special significance. “Due to the high levels of African and European ancestry in modern Puerto Ricans, the native components are difficult to discern; however, when we compare only the estimated ancestry clusters that reflect non-African/European ancestries, there are clear similarities between Puerto Ricans, Arawakan speakers, and the ancient Taino," says the research. The analysis also finds that their DNA diverged from modern Puerto Ricans “only recently."

On the left, a “heat map" of areas with Taino-like genomes. On the right, the Taino and modern Puerto Ricans have their own branch. (Schroeder, et al)

This may be a heartening case of scientific evidence being able to defeat the spoils of war — “History is written by the victors," goes the saying — and revealing hidden truth: The Lucayan Taino were not eradicated after all. The conclusion at which Schroeder and his team arrive is clear: “Lastly, we find that the native component in present-day Puerto Rican genomes is closely related to the ancient Taino, demonstrating an element of continuity between precontact populations and present-day Latino populations in the Caribbean despite the disruptive effects of European colonization."