Scattered, Smothered, and Covered at the WAFFLE HOUSE 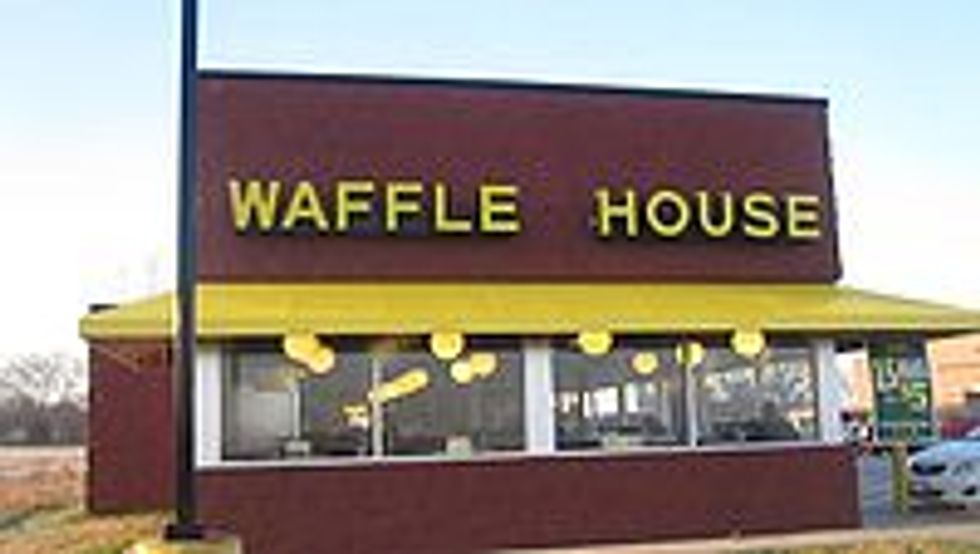 So the New York Times has a predictably pointless or just randomly condescending article on America's leading diner.  The long and diverse thread is a lot more interesting than the article.

Sure Waffle Houses are robbed more than most restaurants.  But it's actually amazing that they aren't robbed more.  They're cash-only concerns in sketchy parts of town or right on the Interstate.  They're easy marks.

It used to be (and may still be, for all I know) that the Waffle House was one of the top examples used at Harvard Business School of an extraordinarily successful entrepreneurial achievement.

Maybe no other chain combines a huge number of locations with real intimacy at each and every one.  Going to a Waffle House is like going to bar.  For one thing, late at night at least some of the customers will be drunk.  And many of them will obviously be struggling to get by in life or just down and out.  But all things considered, everyone is well behaved, and there's a kind of a easygoing friendliness with people you've never met before.

Well, you may actually know the people if it's your local Waffle House.  But the experience is not so different if you've just pulled off the Interstate in the middle of nowhere in some pretty depopulated part of some southern state.

I know northerners who put the Waffle House in the general category of features of the scary, redneck South.  They call it the "Awful House," and they stop there only if they must on the way to Atlanta or Florida or whatever.  They're not properly grateful for the all-day, everyday reliable service and general tastiness of the food so conveniently located next to the exit.

It's true that if you ate at the Waffle House all the time you'd die young.  But the effect on your arteries is clinically insignificant if you drop by once in a while.

The Waffle Houses rather conscientiously fulfill a neglected social need.  They're clean, well-lit, warm, and inviting places that are always open.  The one piece of useful information the NYT shares with us is that they knock themselves out never to close, even in blizzards, hurricanes, and other disasters.  They have their own generators, the employees always show up, they stock up on food on the basis of forecasts, and so forth.

There are lots of unfortunate Americans who really need such a place.  They need a cheap, hot meal when the power is out, and they often have been rendered homeless by personal disasters not shared by most of us.

The typical Waffle House crowd is mostly lower middle-class people, people who work with their hands, the class of Americans that was hit hardest by the economic downturn.

But late at night especially, the Waffle House is a classless society.  It is fashionable for young people of all classes to go there (at least in Rome, GA).  College students study for exams there, and they can stay as long as they want, all night, if need be.

One great thing about the Waffle House is that you can sit at the counter and watch your food being prepared.  Nothing is hidden.  If someone spits in your food, you can see it happen.  (So it doesn't happen.)  Can you say that about your fancy French restaurant with the snotty service persons who you really know have nothing but contempt for you?

I've observed many times the high level of professionalism of the staff at Waffle House.  You don't usually have young people working their way through school. The people behind the counter are generally older, and their "career" is what they're doing right now.  They really know what they're doing, and they fill lots of orders quickly and cheerfully.   Let me emphasize cheerfully.  The staff is mostly responsible for what nice places Waffle Houses always seem to be.

The waffles are really delicious.  The best thing to eat at the Waffle House are the scattered, smothered, and covered hash browns—that is, covered with cheese, ham, onions, tomatoes, chili, and other stuff too. All the food groups are represented.

The coffee at Waffle House is much better than the swill at Starbucks.  It's also cheaper, and your cup is bottomless.