Pussy Riot and the Weapon of Art 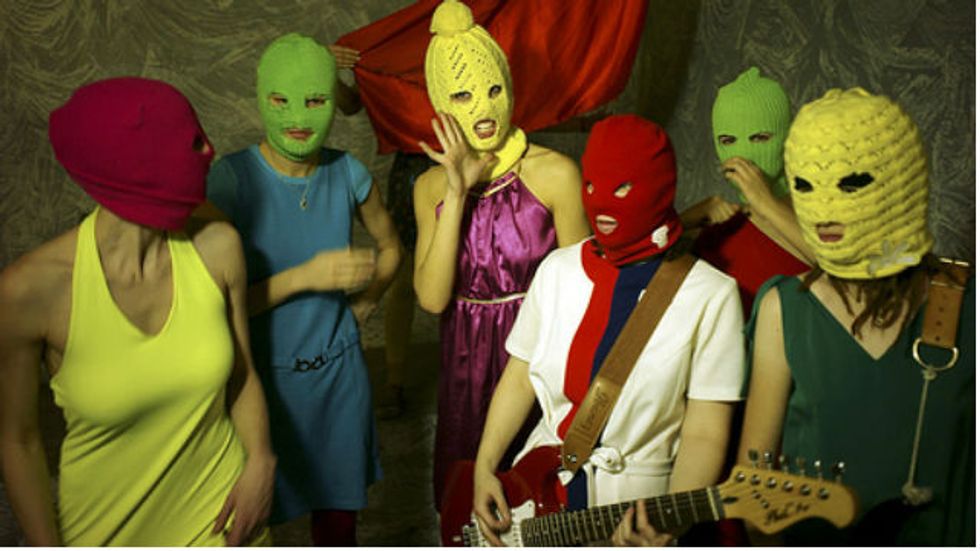 UPDATE: The three members of Pussy Riot have been found guilty for "hooliganism" on Friday August 17th in one of the closest watched Russian trials since the Stalinist regime and have each been sentenced to two years in prison. The U.S. has called the sentence "disproportionate." Outside the Moscow courthouse, supporters and opposition leaders have been arrested, including Russian chess legend Garry Kasparov. The three young women are part of a growing movement of resistance in Russia and are Nadezhda Tolokonnikova, 22, Maria Alyokhina, 24, and Yekaterina Samutsevich, 30.

My grandfather Olexji wrote a memoir about his life in Ukraine under Stalin. While re-reading 1984 the other day, I was struck by the similarities between Orwell’s torture scenes and those endured and described by my grandfather in his memoir. My grandfather was one of countless victims of Stalin's purges of the late 1930s, a time when the West admired "Uncle Joe" as a great leader.  The truth would not be exposed for another decade, with the help of a fearless artist. As I read Orwell, my heart hurt from a strange paranoia—what if George Orwell had never happened? What if Eric Blair, Orwell’s real name, had been too much of a coward to write?

Skill can be developed, but conviction is the steady hands of the artist. It is what fuels the artist to persevere in the face of remarkable uncertainty. Pussy Riot, the feminist art collective that performs impromptu political rock shows around Moscow, exemplifies this. Decked out in brightly colored outfits, the 10 or so members of Pussy Riot wear balaclavas to mask their identities. They do this for security reasons and to demonstrate that their collective is an idea larger than any individual member. After performing last March in Moscow's largest cathedral, calling on the Virgin Mary to “drive away Putin," three of the members are now on trial, each facing three years in prison. The others are in hiding.

In a testament to art, Pussy Riot created a global PR campaign for the growing resistance in Russia against President Vladimir Putin, an admirer and student of Stalin.  Over the past few years, the only internet or media sensation out of Russia has been photographs of ripped Putin with his shirt off and “looking like a complete badass.” Pussy Riot has taken over.

"I am not afraid of your poorly concealed fraud of a verdict in this so-called court because it can deprive me of my freedom," said Maria Alyokhina, one of the three arrested. "No one will take my inner freedom away."

Putin is in a pickle. And it's about time.

There are countless victims of his regime: gunned down journalists, arrested opposition leaders, protesters beaten at mass demonstrations, democracy steamrolled by falsified elections, a population of 141,930,000 million Russians who know they are living in a mutant strain of the Soviet Union. In honor of these victims and for the sake of a better future, Pussy Riot is giving the world a show they want to watch. They are making art with conviction.

For the rest of us, with far less corrupt governments (count your blessings), art with conviction doesn’t require risking one’s life. It’s simply a matter of making art regardless of what demons—internal or external—seem to stand in the way. Conviction is a North Star, an unwavering confidant—the only one that should be listened to. The noisy external things, like trends, advertising, news headlines, petty arguments, the vile decrees of dictators, are all filtered through one's conviction, enabling an artist to defiantly persevere.

Orwell struggled for over a decade to become an artist, and finally learned: "...Looking back through my work, I see that it is invariably where I lacked a political purpose that I wrote lifeless books and was betrayed into purple passages, sentences without meaning, decorative adjectives and humbug generally."

In his essay Why I Write, Orwell gives as a reason for writing: "Desire to push the world in a certain direction, to alter other peoples’ idea of the kind of society that they should strive after." And adds, "Once again, no book is genuinely free from political bias. The opinion that art should have nothing to do with politics is itself a political attitude."

Orwell fought to get published, especially when it came to his breakout novel Animal Farm. It was considered too radical, dangerously anti-Soviet at a time when we needed Stalin to defeat Hitler. Luckily for us, Orwell had a fighter’s spirit, because he had conviction. Animal Farm found a home with a small press, and then went viral. He followed it with his second blockbuster novel, 1984.

In Why I Write, Orwell explains, “Every line of serious work that I have written since 1936 has been written, directly or indirectly, against totalitarianism.” Orwell would have loved and written enthusiastically about Pussy Riot.