What Does “No Justice, No Peace” Really Mean?

With the second non-indictment of a white police officer who killed an unarmed black man in two weeks, the chant “no justice, no peace” continues to ring out in protests around the country. What does that phrase really mean — and how has it been used historically, in protest movements both peaceful and otherwise? 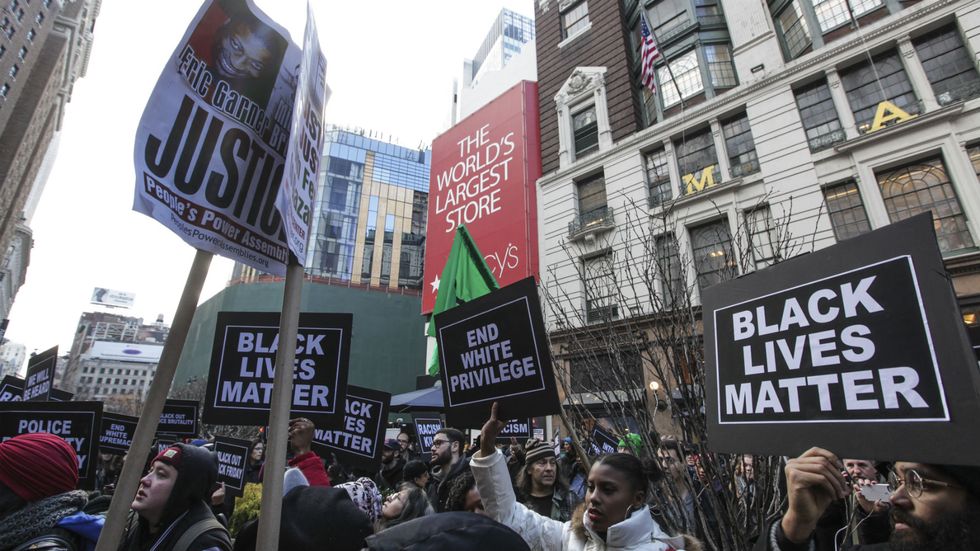 With the second non-indictment of a white police officer who killed an unarmed black man in two weeks, the chant “no justice, no peace” continues to ring out in protests around the country. On Wednesday, after the New York City grand jury declined to indict the police officer who put Eric Garner in the chokehold that led to his death, CNN reports, “hundreds of demonstrators gathered at various points in Manhattan... marching peacefully north as crowds formed near Rockefeller Center for the lighting of the Christmas tree. ‘No Justice. No peace,’ they chanted. ‘No racist police.’ “

Yes, the crowds were marching peacefully while chanting “no justice, no peace.” This may seem ironic, or half-hearted, if you understand the chant as an “if...then” statement. On this reading, the chant means that as long as injustice prevails, acting peacefully is a moral impossibility. It is incumbent on citizens to rise up and demonstrate against injustice, and to do so vehemently, urgently, boldly, bodily, even violently. It means rioting. It means Molotov cocktails. It means rocking police cars and setting things on fire.

This is how Ernest Istook, a former Republican congressman, interpreted the chant in the Washington Times last summer, while the grand jury in Ferguson was hearing evidence:

Instead of waiting out the investigation, they’re chanting, “No justice; No peace!” as a politically correct slogan that actually means, “We want revenge!” That attitude makes bad things become worse.

Mr. Istook concluded his column with this warning:

“No justice; No peace!” isn’t simply a slogan; it’s actually a threat...that will be extracted against anyone who doesn’t bow to the protestors’ demands.

But this take on the chant is neither the only nor the most plausible reading. When Martin Luther King, Jr., said this outside a California prison where Vietnam war protesters were being held on December 14, 1967, he was hardly trying to start a riot:

Dr. King’s formulation contains no threats of violence, veiled or otherwise. He was making a universal point in a particular political context, observing that the antiwar movement (peace) and the civil rights movement (justice) were mutually reinforcing efforts. “I see these two struggles,” he said, “as one struggle.” By fighting a war “against the self-determination of the Vietnamese people,” the United States was, in Dr. King’s eyes, propagating injustice. To fight against segregation inside the country’s borders without opposing unjust exploitation of the Vietnamese people is to fail to recognize that, in Dr. King’s words that day, “injustice anywhere is a threat to justice everywhere.” Without justice, the thinking goes, peace will be an elusive goal. And without peace, injustice is bound to continue.

Yet this pacifist message has not always guided protesters adopting “no justice, no peace” as a mantra. In 1986 and 1987, following an assault on three black men by a white mob in Howard Beach, Queens, activist Sonny Carson appropriated the phrase. Here is an article from Newsday, a Long Island daily, on February 12, 1987 that illustrates an application of the conditional view of the chant:

"No justice! No peace!" Carson shouted. "No peace for all of you who dare kill our children if they come into your neighborhood . . . We are going to make one long, hot summer out here . . . get ready for a new black in this city!

Thankfully, this threatening brand of “no justice, no peace” has not been activated in the current protests over the New York City grand jury decision. The protests have extensive, disruptive to traffic and sometimes dramatic, but they have been remarkably peaceful. “There were no injuries, no vandalism, no significant violence,” New York’s police commissioner said on Thursday. “It was an inconvenience certainly for motorists, but we are not having a Ferguson here ... let’s be quite clear about that.”