Enjoy the inauguration of Barack Obama on Monday, Democrats: it may be the last opportunity to cheer a president from your party for quite a while.

Why this prediction, in the wake of a resounding Obama victory that sent Republicans into angst-ridden bouts of soul-searching? How could the “too old, too white, too male” Grand Old Party advocating generationally incorrect policies claw its way back into the mainstream?

Here’s the crazy thing: it doesn’t have to change its platform to appeal to “the younger and/or the browner,”  as Will Wilkinson puts it, to avoid “perpetual loserdom.” The recipe for a GOP victory in 2016 is simple: (1) a decent nominee who is neither a private equity guru nor a wacko fundamentalist (Florida Sen. Marco Rubio or New Jersey Gov. Chris Christie will work fine) and (2) tweaks to election laws in a few “reddish blue” states that tend to vote for Democratic presidents but whose statehouses are controlled by Republicans. The Republican drive to rig the 2016 election is underway. And there is no clear way to counter it.

The groundwork for the 2016 GOP strategy has been laid, all too well, by gerrymandered districts that delivered a large Republican House majority in November despite the fact that 1.3 million more Americans voted for Democratic candidates. How did this happen? As the 2010 Census data came to light, the savvy Republican State Leadership Committee invested $18 million in state-level efforts to optimize legislative district boundaries for the GOP in states that would be gaining or losing seats due to population changes. In their words:

Drawing new district lines in states with the most redistricting activity presented the opportunity to solidify conservative policymaking at the state level and maintain a Republican stronghold in the U.S. House of Representatives for the next decade.

The so-called REDMAP strategy to “to erect a Republican firewall through the redistricting process” worked, in spades. Obama won Ohio by two points, but Democrats lost all but 4 of the state’s 16 House races. In Pennsylvania, Obama won by 5 points while Democratic candidates suffered defeats in 13 of 18 districts. Listen to the RSLC bask in its success:

Republicans enjoy a 33-seat margin in the U.S. House seated yesterday in the 113th Congress, having endured Democratic successes atop the ticket and over one million more votes cast for Democratic House candidates than Republicans.

Yes, you read that correctly: the GOP is flaunting an electoral strategy that defied the forces of democracy and the will of the people to usher in another Republican majority in the House of Representatives. They’re proud to have won despite having received fewer votes.

Here’s how the same strategy could determine the outcome of the race for president in 2016. Currently, the presidential candidate who wins the statewide popular vote takes all of the electoral votes in every state but Maine and Nebraska, where electors are divided up by congressional district. Add a few more reddish blue states to the proportional allocation model, states where districts are now geared to maximize Republican victories, and big swings are possible. As Rachel Maddow reported on Tuesday, Republican efforts are in the works in Wisconsin, Michigan, Ohio, Pennsylvania, Virginia and Florida — the source of 106 of President Obama’s 332 winning electoral votes — to parcel out their influence and reshape the presidential map. And a few days ago, Reince Priebus, chairman of the Republican National Committee, threw his support behind the strategy.

It’s alarming to consider what would have happened if these states had abandoned their winner-take-all electoral rules prior to the 2012 election. Here is how FairVote explains it (after the ad):

If the Republicans in 2012 had passed laws for allocating electoral votes, the exact same votes cast in the exact same way in the 2012 election would have converted Barack Obama`s advantage of nearly 5 million popular votes and 126 electoral votes into a resounding Electoral College defeat.

Look at the lower right corner of this FairVote chart for details of what could have been: 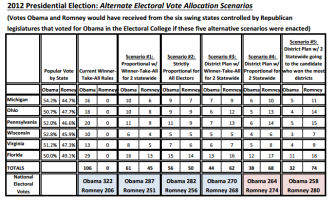 If Republican lawmakers and governors in these six states had caught on earlier, it would be President Romney being inaugurated this coming Monday. With the next election still years away and everyone’s attention directed on the fight over gun control and the debt ceiling, now is the perfect time for the Republicans to launch another stealth campaign to rig the electoral landscape in their favor.

Released in 1972, “Ways of Seeing” has proven to be as worthy of study as the artistic traditions it investigates.
Up Next

Team Obama Mastered the Science of Mass Persuasion — And Won

The president won reelection with the help of the science of mass persuasion, a very particular, advanced use of predictive analytics.