Humanitarian aid increases human welfare on a global scale, but it can also be one of the greatest ways of spreading influence and diplomatic power.

One of a nation’s primary ambitions is to make sure that its interests are seen through on a worldwide scale. Foreign policy encompasses economic, cultural and military initiatives and for a long time that primarily meant the latter: militaristic might and force. Now, in an increasingly globalized environment, foreign policy requires much more tact.

Successful foreign policy entails a focus on areas of trade, global finance, human rights and humanitarian foreign aid. The U.S. is required to deal with a litany of concerns on the world stage, and one of the ways it does this is through foreign aid—it’s a powerful foreign policy tool in America’s non-combative arsenal. Nations can use foreign aid as a way of bolstering a friendly regime or punishing an antagonistic nation by withdrawing aid.

The granting and receipt of foreign assistance serves the commercial interests of donor countries. Target countries receiving the aid are given an incentive to adjust their behavior or risk termination of aid. This can be an effective deterrent against rogue nation-states that depend on foreign aid, and by helping the people of a foreign nation, donors can also win favor and strengthen diplomatic ties without the threat of war.

The United States as a donor can decide which countries will receive aid, when they’ll receive it, what it is and how to deliver it. In 2016, the most recent available data, the U.S. spent $49 billion on foreign aid—about 1% of its annual spending—which includes supporting the UN. Many critics of overseas foreign development and assistance feel that this is a waste of resources, and a 2017 Rasmussen poll reports that 57% of Americans feel that the U.S. gives too much—but there is evidence to show that this is not the case.

Investments in foreign aid enhance the recipient country’s wellbeing and ensure greater stability and security. Meanwhile, it spurs them to become more peaceful societies and greater allies of the United States. 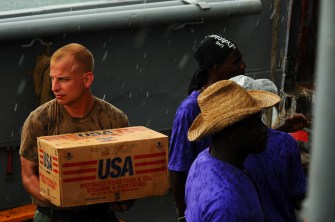 Locals assist crew members from USS Kearsarge to load a landing craft utility with supplies to aid those affected by hurricanes in Port-au-Prince, Haiti in 2008. America’s contributions to the relief efforts were coordinated by the United States Agency for International Development (UNAID) and its U.S. Foreign Disaster Assistance office. (Photo by Mass Communication Specialist Seaman Apprentice Joshua Adam Nuzzo/U.S. Navy via Getty Images)

The effectiveness of global foreign aid

Although the level of aid sent out to foreign countries varies from year to year, the practice isn’t going away anytime soon. This has remained true for some time. In a book written in 1962 titled The Politics of Foreign Aid, William Henderson states:

“Foreign aid as a political instrument of U.S. policy is here to stay because of its usefulness and flexibility.”

Many times we don’t realize that foreign aid is more than just a tool for economic development of poorer or destabilized countries. By alleviating poverty, these developing states enter into the global political sphere in a greater developed stage. The citizenry is less apt to join fundamentalist groups or dogmatic rebel movements.

There’s quantifiable research that backs up this viewpoint. A 2018 study titled “Has development assistance for health facilitated the rise of more peaceful societies in sub-Saharan Africa?” found that countries in this region have become more stable as a result of American aid. The authors analyzed the years between 2005 and 2014, where a plan from the executive branch titled the President’s Emergency Plan for AIDS Relief, and other global health programs, were given increases in funding. It was found that countries that received the highest levels of health aid per capita had improved nation-state stability metrics. This entails measures such as higher governing quality, less corruption, and a greater civil society. Many of these countries were also highly destabilized because of HIV outbreaks and other disease-affected living conditions. 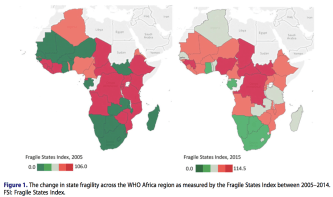 (Source: ‘Has development assistance for health facilitated the rise of more peaceful societies in sub-Saharan Africa?’)

Their findings suggested that low-income nations that faced greater health challenges and received support for their health systems found immediate results in state stability metrics. “Seventeen nations (36.2%) exhibited an overall decline in their FSI over the duration of the study period [Figure 1, above], indicating greater stability,” the study states. On top of saving lives, it also gave rise to more peaceful and governable societies.

An opportune time to take the lead

The U.S. foreign assistance budget makes up only 1% of the entire federal budget. This is a small price to pay for increased global stability through non-violent means. Continued U.S. foreign assistance is an important step in ensuring nations stay stable and the country’s interests are protected abroad. Many global threats like mass epidemics and terrorism grow from the seeds of instability and corrupt governance. Working towards counteracting these problems doesn’t just save lives today but it also helps bring about a more prosperous tomorrow.

One such businessman knows the positive implications that humanitarian aid can bring to unstable foreign countries. In a post by Microsoft co-founder Bill Gates, titled “Giving foreign aid helps America’s economy“, he put forth the proposition that previous U.S. foreign aid intervention helped lead the way for a number of countries to become economic powerhouses and subsequently helped United States businesses. He states:

“Just a few decades before we opened our Tokyo office, Japan had been devastated by World War II. Its economy and infrastructure lay in ruins. How did they recover? Among other things, through smart aid programs from the United States and others. By the 1980s Japan’s economy was booming, and the country presented a great opportunity for companies like us. To this day, sales there are a key part of Microsoft’s success and these sales have produced many jobs in Japan and America alike.Microsoft’s experience in Japan is part of a larger trend that’s still going on today, as more countries join the ranks of the middle class. Countless U.S. companies are doing business in places that used to get American aid but have become self-sufficient, including South Korea, Brazil, Mexico, Vietnam, and Thailand.”

Harking back to the days of the Marshall Plan and reconstruction of Japan, Gates postulates that similar efforts could do the same for Middle Eastern or African countries as well.

In a time when there are tens of millions of displaced peoples fleeing from famine and civil wars, humanitarian aid is needed now more than ever. There is a precedent in the past that we can follow. Rather than create further enemies through war and hard-headedness, we can create peace and economic prosperity through foreign aid.

The most unusual star known has finally had its dimming scientifically explained. Here’s the unusual, dusty resolution.The science of planet-hunting has truly taken off in the 21st century, with the […]