What does solar energy adoption look like across America? The company Modernize has published a piece, called The Solar Surge, which beautifully illustrates the adoption of solar across America and which states are leading the charge.

The top 10 states with the most solar installations* dating back to as far as 1995, include California, Arizona, New Jersey, Massachusetts, New York, Connecticut, Pennsylvania, Texas, Maryland, and New Mexico. 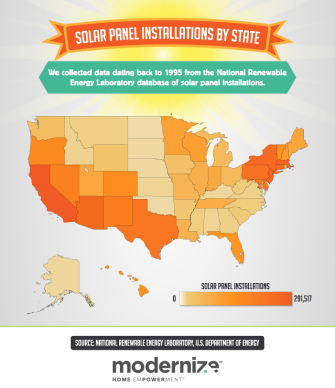 The adoption of renewable energy has been growing significantly over the past decade (up around 139,000 percent), due in part to the drop in the cost. Back in 1998, installing solar panels would have cost somewhere around $90,000—hardly a consumer-grade piece of technology. But today, homeowners can expect to pay somewhere below $30,000.

Investments to improve battery and photovoltaic technology continues to drive the price down. Some researchers are even quite optimistic about the adoption of renewable technology—not just in America, but worldwide—they predict fossil fuels could be eliminated in 10 years. But, the researchers say two things needed to happen in order for this prediction to come true:

1) Strong government support 2) coupled with a shift in consumer preferences driven by incentives.

As you can see from the graphs below, California has some of the most robust incentives in place, which, in part, explains its residents widespread adoption. Recently, the city of San Francisco passed a city ordinance, which requires all new buildings to come equipped with solar panels. This ordinance builds upon a state law, requiring new buildings to make 15 percent of roofs “solar ready.” 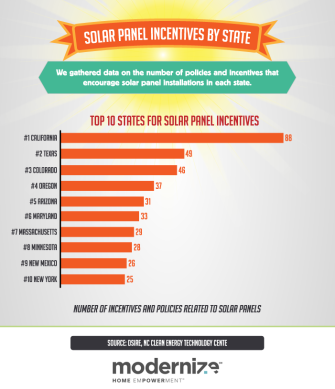 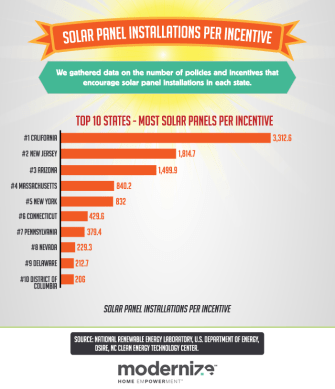 Climate change is a good motivating factor, but nothing moves the masses quite like a good deal. Adoption of renewables will rely on government action and the advancement of solar technology. Government action will dictate whether solar becomes a slow or rapid success in the United States and across the world. In Florida, one of the sunnier states in America, we’re seeing just how much funding from utility companies can impact the adoption of solar.

“We have renewables when three times as much as when this president came into office,” says Gina McCarthy, the Administrator of the U.S. Environmental Protection Agency. “Ten times more solar than we’ve ever had. And these are becoming competitive technologies.”

*”Data was voluntarily contributed from a variety of sources including solar incentive programs, utilities, installers, and the general public.”

Graphs provide by Modernize. Data was obtained from the National Renewable Energy Laboratory, an official laboratory of the U.S. Department of Energy, to show us.

The high pitches from the flute and the harp would reach your ears before the notes from the tuba and the cello.
Up Next
Surprising Science

Why the word ‘moist’ makes you cringe

One psychologist’s quest to figure out one incredibly icky word