Timothy Spall is an extraordinary actor, best known perhaps for the many films he’s done with director Mike Leigh, including Secrets & Lies and Mr. Turner, for which he won best actor at Cannes. You may know him from a number of Hollywood films, too, including the Harry Potter series and The Last Samurai, with Tom Cruise. His latest is THE JOURNEY. It’s based on a real road trip that happened in 2006, when two arch enemies — the heads of Ireland’s warring factions, spent about an hour together in the backseat of a car. This was the prelude to a historic peace deal, cementing the end of Ireland’s long Civil war.

In this episode we dig deep into questions like what people really want from their political leaders, whether it’s possible (or even advisable) to overcome desire, and whether and when just sitting on a park bench, enjoying a tree, is enough. 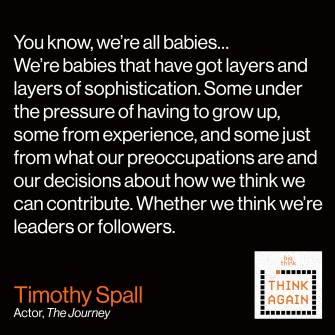 Company culture is always evolving — sometimes for the worse.
Up Next
Personal Growth