On Monday, August 21 there will be a continent-wide solar eclipse, the first to be visible only in the US since 1776. It’ll also be the first to cross the entire continent in the last 99 years, moving east from Oregon to South Carolina. A solar eclipse is when the moon passes between the Earth and the sun, while a lunar eclipse is when the Earth passes between the moon and the sun.

What we see is actually the shadow of the moon being cast onto the Earth. For a time you get that ethereal corona around Earth’s oldest satellite, or its shadow. It’s hauntingly beautiful and symbolic of tremendous change. But be warned, the “path of totality” when the moon completely envelops the sun, will last a couple of minutes total. Be prepared or else you’ll miss it.

The schedule and how much of it you can see varies from where you live. See a map and schedule here. There are partial eclipses and total ones. Although it happens somewhere on Earth once every year, witnessing a total solar eclipse is exceedingly rare. It only occurs once every 375 years, on any one place on the planet, on average. 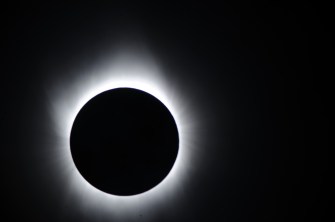 A total solar eclipse at the moment of totality. Getty Images.

While it’s a fantastic opportunity to observe one of the most dramatic astronomical events you can witness from Earth, it’s important that one do so safely. Wearing sunglasses or cupping your hands around your face isn’t good enough. And sunglasses aren’t strong enough filters.

Dr. Thomas Hwang is a retina expert at the Oregon Health & Science University (OHSU) Casey Eye Institute. He’s also an associate professor of ophthalmology in the OHSU School of Medicine. He says that when it’s occurring, it may seem dark, but this is one of the most dangerous times to look at the sun, because the energy reaching your eye is concentrated into the center of your vision. The results can be disastrous.

“If you look directly at the eclipse,” Dr. Hwang said, “it can burn your retina in mere seconds and can cause permanent damage.” The result, solar retinopathy—a blind spot in your vision. The longer the exposure, the more likely damage will occur. What’s Dr. Hwang’s solution? Wear solar eclipse safety glasses or use a pinhole projector. Even with special glasses, you shouldn’t stare directly at the eclipse for a prolonged period. But it gets even more complicated. 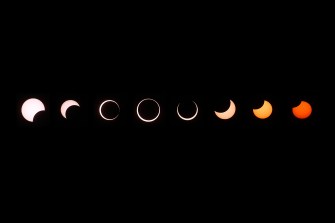 Technically, when the sun is fully encased in the moon’s shadow, you can view it with the naked eye safely. Beyond totality, at any point in the partial eclipse stage, coming or going, you need to wear special glasses and observe the event sparingly. Keep in mind that totality is only about two minutes.

Also be warned that there are hundreds of vendors selling eclipse viewing glasses on Amazon right now, but many aren’t backed by any reputable organization. If you’re considering purchasing a pair, these brands are recommended by the American Astronomical Society (AAS), part of the American Institute of Physics (AIP). Looking directly at a solar eclipse can seriously hurt your eyes. Getty Images.

Some other important safety tips according to the AAS:

A pinhole projection is another way to observe the upcoming solar eclipse, albeit an indirect one. There are those you make and those you buy. For a great rundown of the different kinds, click here.

To learn more about the “Great American Eclipse,” click here:

Spontaneous talk on surprise topics. Author and former Wall Street hedge fund analyst Sheelah Kolhatkar on the reality and the dangers of the financial industry today.