If you worry about climate change, really worry, you are aware of the United Nations-convened COP21 (Council of Parties) negotiations going on for the next week and a half in Paris. But if you’re like most people, you don’t worry about climate change, not deeply, not enough to be paying attention to the meeting of roughly 200 nations discussing how to reduce the immense threat to life on Earth as we know it from what humans are doing to the climate and the entire biosphere.

That lack of deep and widespread public concern is why the Paris talks will end up being more talk than significant progress. No matter what the countries agree to, either in terms of actual reductions in greenhouse gas emissions or in terms of a legally binding monitoring process to make sure nations keep their promises, the progress made at these talks will fall far short of what is necessary to forestall serious, even catastrophic harm from climate change. Without deep public concern, the political will is just not there to push governments to do the big things that taming this big threat requires.

A lot of polls and surveys have been published to coincide with the COP21 talks. On the central question of how worried people really are, these findings are all, unsurprisingly, pretty bleak. A Globe Scan survey of 21 OECD (wealthier) nations found that only about half of the public thinks climate change is a very serious problem, and those percentages drop to just one-third in China and the U.S., the world’s two biggest economies that are doing most of the polluting and have to reduce emissions far more than they have promised. 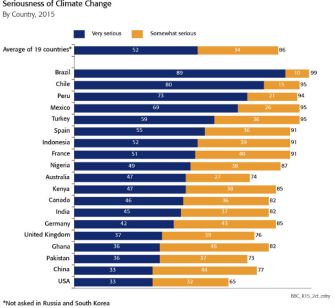 One survey by the Yale Project on Climate Change Communication found that only four Americans in 10 feel personally threatened by climate change. 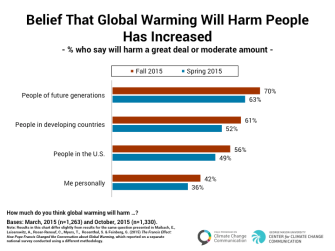 Another Yale survey found that

… most Americans report a general sense that global warming can be harmful to health, but relatively few understand the types of harm it causes or who is most likely to be affected (my emphasis). Perhaps as a result, there is only moderate support for an expanded (government) public health response.

A Pew survey found really depressing evidence. In Europe, Asia, and in the U.S. and China specifically, only roughly one person in four is very concerned that they are personally threatened by climate change. In China, the world’s largest current emitter of greenhouse gasses, that figure is just one person in seven. 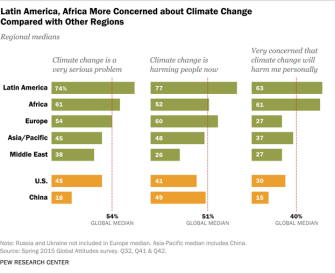 Climate change doesn’t feel personally threatening, nor immediately threatening, enough to energize strong enough political support for major emissions reductions. Which explains why, as Justin Gillis of The New York Times has reported, the cuts that countries have promised going into the Paris meetings, while greater than previously promised, are inadequate to keep global climate temperature increases to no more than 2 degrees Celsius (3.6 degrees Fahrenheit), a generally recognized threshold beyond which climate change impacts start to get catastrophic.

In effect, the countries are vowing to make changes that collectively still fall far short of the necessary goal, much like a patient who, upon hearing from his doctor that he must lose 50 pounds to avoid life-threatening health risks, takes pride in cutting out fries, but not cake and ice cream.

The pledges countries are making are voluntary, and were established in most nations as a compromise between the desire to be ambitious and the perceived cost and political difficulty of emissions cutbacks.

The tough negotiations in Paris aren’t about deeper cuts. They’re really about whether and how to make voluntary promises legally binding, and big emitting nations, like India, are hedging on that.

To be fair, lots of progress is being made, and Paris has given that progress attention and momentum. The talks, said Christiana Figueres, executive secretary of the United Nations Framework Convention on Climate Change,

“represent a clear and determined down payment on a new era of climate ambition from the global community of nations.”

And to be fair, hundreds of the world’s largest companies are dramatically reducing their greenhouse gas emissions, because it’s the right long-term business strategy, not because consumers are clamoring for such changes.

And to be fair, some of the wealthiest people in the world (Bill Gates, Mark Zuckerberg, Jeff Bezos, Jack Ma of Alibaba, Richard Branson) have donated billions of their own dollars to create the Breakthrough Energy Coalition to fund research on new clean energy technologies, like advanced nuclear power generation. Public pressure didn’t prompt that.

But the energy sector produces only about a third of the world’s greenhouse gas emissions. Industry, transportation, agriculture, residential, land clearing (rainforest burning), even waste disposal (methane from garbage dumps and sewage treatment) — the list of huge economic sectors also contributing to human-induced climate change is depressingly long, making the challenge of reducing these emissions technologically, economically, and politically difficult.

And that’s with strong and widespread public pressure. Which just isn’t there. And isn’t likely to be, at least not until the really severe damage from climate change starts to hit everywhere and more people realize, “Hey, this IS happening to ME, NOW!” Which will be too late. Short of that level of worry, the promises and concessions likely to come out of Paris, both in terms of actual emissions reductions and in terms of what sorts of internationally legally binding controls most nations will accept, are likely to give the world only as much as our worries currently demand — which isn’t nearly enough.

Related
Starts With A Bang
The Universe’s most unbreakable symmetry
The combination of charge conjugation, parity, and time-reversal symmetry is known as CPT. And it must never be broken. Ever.
13.8
The weirdness of quantum mechanics forces scientists to confront philosophy
Though quantum mechanics is an incredibly successful theory, nobody knows what it means. Scientists now must confront its philosophical implications.
Neuropsych
Why is a Starbucks loyalty rewards program making customers so angry?
The rewards price to get a free cup of hot coffee at Starbucks is going up.
Empowering growth
7 essential management training topics for every team leader
From emotional intelligence to problem solving, these management training topics will set team leaders up for success.
Thinking
What if you could rewire your brain to conquer suffering? Buddhism says you can
For Buddhists, the “Four Noble Truths” offer a path to lasting happiness.
Up Next
Culture & Religion
IKEA’s Innovative Solution for Refugee Shelter Can’t Keep Up with Demand
The brain behind these shelters is Industrial Designer Johan Karlsson, designing what he described as an “incremental modification to existing refugee shelters.”