The Supreme Court has ruled in favor of a Colorado baker who refused to bake a same-sex wedding cake for religious reasons, though justices avoided the broader question of whether religious business owners are exempt from some discrimination laws.

In a 7 to 2 decision, the court set aside a Colorado ruling against Jack Phillips, owner of Masterpiece Cakeshop in Lakewood, Colo., who in 2012 refused to bake a cake for the wedding of Charlie Craig and David Mullins. Phillips told the same-sex couple that creating the cake would violate his beliefs as a Christian, but said they were welcome to buy other goods in the shop.

Craig and Mullin filed then a complaint with the Colorado Civil Rights Commission (CCRC), which ruled against Phillips. But Monday’s decision sets aside that ruling. 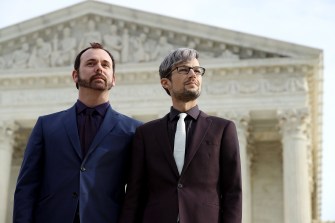 Justice Anthony Kennedy wrote the majority opinion, arguing that the CCRC showed hostility toward Phillips’ “deep and sincere religious beliefs” to the extent that it cast “doubt on the fairness and impartiality of the Commission’s adjudication of” the case.

Kennedy referenced how one commissioner said at a public hearing that religious views like Phillips’ have been used throughout history to justify atrocities like slavery and the Holocaust. But the question at hand wasn’t whether Phillips is a religious bigot. The Supreme Court was interested only in whether the CCRC had handled the Phillips case with impartiality.

The majority ruled it hadn’t, arguing the way the commission treated Phillips “was inconsistent with the First Amendment’s guarantee that our laws be applied in a manner that is neutral toward religion.”

Both the Supreme Court and Phillips consider creating a wedding cake to be an artistic act.

“What a cake celebrating this event would communicate was a message that contradicts my deepest religious convictions, and as an artist, that’s just not something I’m able to do, so I politely declined,” Phillips wrote in an op-ed for USA Today. “Designing a wedding cake is a very different thing from, say, baking a brownie. When people commission such a cake, they’re requesting something that’s designed to express something about the event and about the couple.”

“Whatever one may think of the statements in historical context, I see no reason why the comments of one or two Commissioners should be taken to overcome Phillips’ refusal to sell a wedding cake to Craig and Mullins.”

In any case, the decision sheds little light on how courts might approach similar questions on the intersection of religious freedoms and gay rights down the road.

“Today’s decision is remarkably narrow, and leaves for another day virtually all of the major constitutional questions that this case presented,” said Steve Vladeck, CNN Supreme Court analyst and professor at the University of Texas School of Law. “It’s hard to see the decision setting a precedent.”

However, the ruling could foreshadow how the Supreme Court will approach a seemingly unrelated issue, as Noah Feldman wrote in an op-ed for Bloomberg.

“Intriguingly, the decision can be understood as a hint that President Donald Trump’s Muslim travel ban may be struck down later this month, as the travel ban can be read as expressing hostility to Muslims. The two most pragmatic liberal justices, Elena Kagan and Stephen Breyer, concurred in the Masterpiece Cakeshop decision—which suggests that they wanted to show Kennedy they are on his side against religious hostility, and want him to vote with them on the travel-ban case.”

Related
Thinking
Finding your essential self: the ancient philosophy of Zhuangzi explained
Adopting a healthy scepticism towards inherited ideas means “emptying the container of the Self.”
The Future
Startup’s bladeless flying car is designed to reach Mach 0.8
One of Jetoptera’s VTOLs is expected to reach speeds of around 614 mph, about as fast as a commercial jet airliner.
Health
New blood types are often discovered following medical disasters
New blood types are regularly discovered by an unusual absence or an unusual presence — both of which can result in tragedy.
The neuroscience of loving music
Humans are musical animals four million years in the making, explained by music expert Michael Spitzer.
▸
8 min
—
with
Michael Spitzer
Life
Scientists use CRISPR to insert an alligator gene into a catfish
Disease kills off 40% of farmed catfish. This gene protects them.
Up Next
Culture & Religion
Will Starbucks’ racial sensitivity training work?
Starbucks is only the latest example of a very old systemic problem. Are these trainings effective?