The court said he will retire effective July 31.

Kennedy was an influential and moderate justice whose vote was often decisive. Although he sided with conservatives more often than not, Kennedy was known at times for displaying a more liberal temperament, such as when he ruled against overturning the 1973 Roe vs. Wade decision and wrote the majority opinion in the 2015 case that legalized same-sex marriage.

His resignation leaves President Donald Trump an opportunity to tilt the court to the right by appointing a more conservative justice, as the president did in 2017 when he appointed Justice Neil M. Gorsuch to succeed Justice Antonin Scalia. Such an appointee would give conservatives a solid 5-4 majority in the court.

Here’s a look at some of the most important decisions by Justice Anthony M. Kennedy, who was appointed in 1987 by former President Ronald Reagan.

Planned Parenthood v. Casey was the first Supreme Court case that had the potential to overturn the Roe v. Wade decision.

It almost did. Kennedy had initially sided with conservative justices in a majority, but had a change of heart and later joined justices Sandra Day O’Connor and David Souter in a plurality that reaffirmed Roe.

“These matters, involving the most intimate and personal choices a person may make in a lifetime, choices central to personal dignity and autonomy, are central to the liberty protected by the Fourteenth Amendment,” the plurality opinion read. “At the heart of liberty is the right to define one’s own concept of existence, of meaning, of the universe, and of the mystery of human life. Beliefs about these matters could not define the attributes of personhood were they formed under compulsion of the State.”

In this highly controversial landmark case, Kennedy wrote a majority opinion in which the court ruled that political spending, from organizations like for-profit corporations and labor unions, for campaign advertisements is a form of protected speech under the First Amendment.

The court had regarded political spending as a form of protected speech in the past, though it upheld certain restrictions on spending out of an interest to prevent corruption—or the appearance of corruption.

“The right of citizens to inquire, to hear, to speak, and to use information to reach consensus is a precondition to enlightened self-government and a necessary means to protect it,” Kennedy wrote in the opinion. “The First Amendment “‘has its fullest and most urgent application’ to speech uttered during a campaign for political office.” 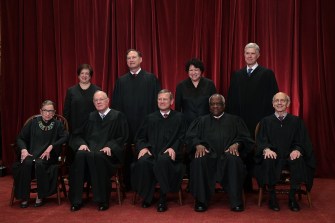 Kennedy’s vote was again decisive in this monumental decision that ultimately granted former President George W. Bush a seat in the White House.

In Florida, state law mandated that a hand recount occur when the margin of victory in an election was less than 0.5 percent. After the remarkably close results of the 2000 presidential election came in, a recount was ordered. The validity of the recount was contested at state and federal levels until the Supreme Court ultimately ruled in a 5-4 decision that a recount couldn’t be completed by the December 12 “safe harbor” deadline. The decision meant the initial election results were final.

As New Yorker legal analyst Jeffrey Toobin wrote, the decision was surprising because it was the work of conservative justices who had traditionally deferred to the “preëminence of states’ rights,” but in this case chose to override the Florida courts.

Justice Ruth Bader Ginsburg would likely agree—she famously ended her dissenting opinion with “I dissent” instead of the traditional “I respectfully dissent.”

In 2015, Kennedy joined four liberal justices to form a majority in this landmark case that struck down state bans on same-sex marriage in the U.S.

“No union is more profound than marriage, for it embodies the highest ideals of love, fidelity, devotion, sacrifice, and family. In forming a marital union, two people become something greater than once they were. As some of the petitioners in these cases demonstrate, marriage embodies a love that may endure even past death. It would misunderstand these men and women to say they disrespect the idea of marriage. Their plea is that they do respect it, respect it so deeply that they seek to find its fulfillment for themselves. Their hope is not to be condemned to live in loneliness, excluded from one of civilization’s oldest institutions. They ask for equal dignity in the eyes of the law. The Constitution grants them that right.”

But Kennedy wasn’t always in line with gay rights advocates. Most recently, he voted in favor of Masterpiece Cakeshop, a bakery that refused service to a same-sex couple in Colorado.

Still, it’s easy to see how a more conservative justice could slow, or even reserve, the expansion of LGBTQ rights in the U.S.

Related
Starts With A Bang
The path forward for astronomers and native Hawaiians
A history of injustice and the greatest natural location for ground-based telescopes have long been at odds. Here’s how the healing begins.
Thinking
“Give a f***, actually”: The surprising benefits of being grateful for things you dislike
Radical Emotional Acceptance calls on you to celebrate all of life’s emotions — even the negative ones.
Thinking
Visual thinking: How to understand the inner lives of animals
Humans are good visual thinkers, too, but we tend to privilege verbal thinking.
Strange Maps
The world’s longest straight line connects Portugal to China
It’s nearly 20,000 miles long.
The Well
This is what the fourth dimension looks like
Left–Right, Back–Forth, Up–Down. What’s the fourth dimension?
▸
3 min
—
with
Brian Greene
Up Next
Mind & Brain
MIT scientists discover fundamental rule of brain plasticity
Our brains are famously flexible, or “plastic,” because neurons can do new things by forging new or stronger connections with other neurons. But how, exactly, does it do that?