By now, you’ve probably read about how Americans working in the American embassy in Havana, Cuba last year were attacked with a sonic weapon. It’s serious business—nobody is quite sure who attacked them or why—but they have been able to identify the sound, which you can listen to here (it goes without saying: don’t listen to this super loud on repeat).

Researched just released a report detailing the symptoms of the attack, which range from mental fogginess to irritability and nausea. Considering these symptoms are still prevalent nearly 250+ days after the attack, the sonic exposure looks to be much worse than originally intended. Of those affected, most heard a high pitched grating sound and reported feeling pressure. Almost all required or continue to require treatment long afterward.

Should you worry? Well, most likely not. It’s most likely that this was set up in a car outside the embassy and fired from there. Advice within the report states that the longer one is exposed to the sound, the worse the symptoms are, and since many within the building initially felt that it was a singular phenomenon (i.e. “I guess I alone am hearing this awful sound so I’ll just deal with it”), they didn’t move from the building.

Audio attacks — if you will — aren’t new. During the 2010 Occupy Wall Street protests, the LRAD 500x was used to disperse crowds. Sound cannons similar to the LRAD 500x were used on Dakota Pipeline protestors, and in the civilian world there’s a popular deterrent called The Mosquito prevents loiterers by emitting a super high-pitched sound that would make you not want to hang out in front of it.

Cuban investigators have dismissed the audio attacks as a mass “mass psychogenic illness” — yet the recently released report has an interesting note that not all those affected knew each other. What appears to have happened was that most everyone in the building heard it, dealt with it in the moment, and later reported it after initial symptoms developed.

Below are two tables from the report, describing the symptoms. We’ll update this post as more facts become available. 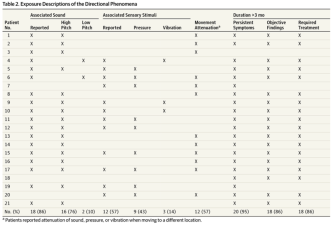 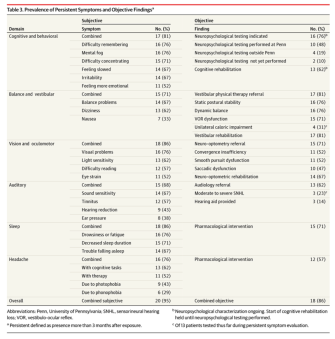 Related
The Present
The Taoist philosophy behind Alibaba, China’s e-commerce giant
Alibaba has played a key role in China’s meteoric economic rise.
The Well
Can we condition ourselves to be heroes?
Neuroscientist Robert Sapolsky on the science of temptation, and the limitations of your brain’s frontal cortex.
▸
6 min
—
with
Robert M Sapolsky
Thinking
3 brain games to practice deductive, inductive, and abductive reasoning
Take a closer look at the different types of reasoning you use every day.
Starts With A Bang
The galaxy cluster that broke modified gravity
19 years ago, the Bullet Cluster provided an empirical proof for dark matter. Even today, modified gravity still can’t explain it.
Neuropsych
Psychology studies that go viral are likelier to be bogus
A new 20-year analysis of over 14,000 psychology studies finds that a study’s media coverage is negatively linked to its replicability.
Up Next
Personal Growth
5 American philosophers on the meaning of life
Trying to figure out the meaning of life? Here are a few thoughts on the subject from some very famous American philosophers.