Measles is making a comeback in some European nations, partly thanks to the anti-vaccination movement.

In February, the World Health Organization released a report that showed the European region experienced 16,000 measles cases in 2017, representing a four-fold increase compared to the previous year. About one in four European countries were affected by large measles outbreaks, but hit especially hard were Ukraine, Romania, and Italy.

“Every new person affected by measles in Europe reminds us that unvaccinated children and adults, regardless of where they live, remain at risk of catching the disease and spreading it to others who may not be able to get vaccinated,” says Dr. Zsuzsanna Jakab, WHO Regional Director for Europe, to UN News. “Over 20,000 cases of measles, and 35 lives lost in 2017 alone, are a tragedy we simply cannot accept.” 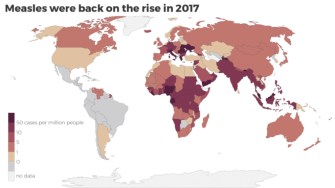 Italy’s situation is alarming. The developed country reported 5,000 cases of measles in 2017, which was about 200 times more than the U.S. In total, four people in Italy died last year from measles: one adult and three children under age 10, all unvaccinated.

Anti-science sentiment in the country is largely to blame. The Five Star Movement, a populist political party, has been one organization to raise doubts over the efficacy of vaccinations in recent years. In 2014, the party proposed a law that called for “better information and possible denial of administering vaccinations.” The proposal cited multiple debunked studies.

Although much of the European measles resurgence was caused by anti-vaccination sentiments, a smaller portion was likely the result of unvaccinated migrants. A 2015 study found that across 13 European nations, migrants accounted for about 7 percent of measles cases.

Here are the total reported measles cases in Europe for 2017.

Globally, measles is considerably more prevalent in less developed regions. In 2017, the World Health Organization reported a total of 115,117 measles cases worldwide. The vast majority came from the Southeast Asia region, where about 4.8 million children go unvaccinated each year.

Measles is a disease caused by an extremely contagious virus. Anyone can develop measles, but it’s more likely to affect young children, especially those who are poorly nourished. The measles vaccine can protect children against the disease with an efficacy rate of 97 percent after two doses. The vaccine became widespread in the early 1960s, but before that measles killed more than 2 million people each year, and made thousands blind.

Vaccination doesn’t just protect the person being immunized. It protects the entire population. That’s because of an epidemiological concept called herd immunity, which is the protective level of resistance to a disease that occurs when a sufficient amount of a population is immunized. Simply put, you become safer as less of your neighbors have the disease.

The herd immunity rate necessary to eliminate measles in a population is about 90 to 95 percent.

“I urge all endemic countries to take urgent measures to stop transmission of measles within their borders, and all countries that have already achieved this to keep up their guard and sustain high immunization coverage,” said Dr. Jakab to UN News. “Together we must make sure that the hard-earned progress made towards regional elimination is not lost.”

Related
Neuropsych
Psychology studies that go viral are likelier to be bogus
A new 20-year analysis of over 14,000 psychology studies finds that a study’s media coverage is negatively linked to its replicability.
The Future
How a device transmits radio waves with almost no power
Apart from the energy needed to flip the switch, no other energy is needed to transmit the information.
The Present
Radical idea: Redraw the U.S. map as a nation of city-states
While cities drive national economic growth, their political geography means they cannot effectively deal with inequality, poverty, and other socioeconomic problems.
The Learning Curve
Why do high IQ people stagnate in their careers? Emotional intelligence
Research suggests that emotional intelligence is more vital for success than IQ.
The Present
Even in the age of AI, some problems are just too difficult for computers
Computers are growing more powerful and more capable, but everything has limits
Up Next
Surprising Science
Physicist Michio Kaku – Timid Monkeys on Mars – Think Again – a Big Think Podcast #136
Terraforming Mars. Beaming your consciousness to Alpha Centauri. It’s the end of the world as we know it, and Dr. Kaku feels fine.