So is the wine glass half full or half empty? Did the Paris climate talks succeed or fail? Those claiming success note that nearly all the nations of the world have agreed to cut carbon emissions, and to a process designed to encourage deeper cuts in the future, and to a verification process intended to ensure that promised cuts are being made. Those bemoaning failure observe that despite these diplomatic achievements, the emission cuts won’t achieve the agreement’s goal of keeping temperature increases below 2 degrees centigrade over pre-industrial levels (we’re already half the way there). And they note that the process designed to ensure compliance with initial promises, and prompt deeper carbon reductions in the future, is largely voluntary.

But success or failure is only one metric by which to assess the Paris talks. Perhaps more important is to consider what those talks reveal about where humanity stands in facing this monumental challenge. From that standpoint, the results of the Paris conference are far more depressing than encouraging. The inescapable message is that nations are simply not ready to do the big, hard things necessary to adequately address the threat. Not even the nations proposing the most aggressive actions are anywhere close. All the cheering and back-slapping for the diplomatic success of Paris aside, the meetings make starkly clear that the will to seriously combat climate change is nowhere near what it needs to be.

The glass-half-full folks celebrate that many significant carbon-emitting nations — the United States, China, several European countries — are promising real cuts. But the leaders of these countries admit that these reductions — should the promises be kept — won’t prevent temperatures from rising by more than two degrees C. This chart shows what most analysts calculate is where we are heading even if all the Paris promises are kept. 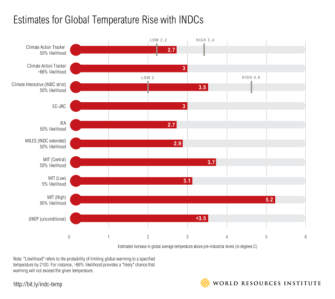 That’s one sobering signal that key nations aren’t currently willing to do enough. So is the fact that many major emitting countries, including large developing nations like India and Indonesia, promised in Paris only to increase their emissions more slowly, with eventual cuts a future goal — an aspirational maybe, not a solid commitment.

Another discouraging signal is that nations, including the United States, would only agree to a process to monitor initial promises and encourage deeper future cuts that is largely voluntary. That’s another clear sign of lack of will to commit to significant action.

And despite the spin of President Barack Obama and others who claim the Paris accord is a success because it sends a clear signal to the business world that the end of fossil fuel is nigh, the inadequate emissions reductions and the voluntary nature of the compliance process are in fact a clear signal to the markets that governments are nowhere near ready to fully wean the world off fossil fuel anytime soon.

What Paris makes clear, then, is that the depth of concern about climate change doesn’t nearly match the enormity and urgency of the threat; not among our political leaders, not among our business leaders, and certainly and perhaps most importantly not among the public, which means there is inadequate political pressure for the major actions the situation urgently requires. UN Secretary General Ban Ki Moon declared of the Paris accords, “We have come to a defining moment on a long journey that dates back decades.” That’s really depressing, because here’s the definition of the best the world could do in the face of a potentially catastrophic threat;

Paris Climate Agreement, n, an international agreement achieved in December 2015 to deal with the threat of climate change that revealed how little the world was actually ready to do.

This image from Paris also reveals much about what the COP21 talks tell us. 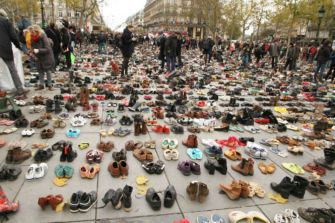 These are the empty shoes of protestors who wanted to be there, but were banned because of security concerns. But they don’t actually represent public concern. Rather, their emptiness captures the absence of sufficient public concern needed to push politicians to do more. These empty shoes are also part of what Paris revealed about where we stand on climate change. As Michael Grubb, an energy and climate expert at University College London told The Telegraph;

“However much people profess to care about climate change, they do not seem willing to vote for this — nor do politicians seem willing to really try and persuade them.” “All the evidence from the past 15 years leads me to conclude that actually delivering 1.5C is simply incompatible with democracy.”

The glass-half-full view is that the Paris climate talks created a momentum that will generate that level of concern. That is sadly naïve. It is unlikely that international negotiations that most people never even heard about will make any of us more worried. Climate change is still a threat that doesn’t feel like it threatens us personally, and it certainly doesn’t feel like it threatens us now as much as it threatens some abstract distant — and less scary — tomorrow.

So while negotiators in Paris were trying to get the world to reduce its carbon emissions, you and I were going about our normal lives, commuting alone and throwing away a quarter of our food and shopping for whatever we can afford and leaving the lights on and the water running and the heat (or air conditioner) up high and uploading our cat videos — instinctively doing all the normal things we do to live the lives we want, the carbon footprint of our lives notwithstanding. And people in the developing world were doing all the things that instinct compels everyone to do; acquire the food and shelter and energy and appliances and stuff that ensure our comfort, safety, and survival.

The progress in Paris is encouraging. Despite the lack of broad, deep public support, our political and business leaders have taken serious action to at least begin to seriously address climate change. But if the achievements of the COP21 talks are the measure of how far the world is willing to go in the year 2015 to combat this immense threat, Paris is a discouraging reality check that until the anthropogenic changes we are baking into the climate system are inundating coastal cities and decimating food supplies and causing countless other tangible harms, the danger won’t feel personally threatening enough, or immediate enough, to get people worried enough to push for the changes that are needed. And that is a half-full glass of bitter wine indeed.

Related
Neuropsych
Memory and the benefits of forgetting
Forgetfulness isn’t always a “glitch” in our memories; it can be a tool to help us make sense of the present and plan for the future.
The Learning Curve
5 Stoic quotes to help you through difficult times
“We suffer more often in the imagination than in reality.”
Starts With A Bang
The good reasons scientists are so hostile to new ideas
Many people out there, including scientists, claim to have discovered a series of game-changing revolutions. Here’s why we don’t buy it.
The Present
Climate change is altering the chemistry of wine
Smoke taint from wildfires is gross, even to wine amateurs.
13.8
Could a hidden variable explain the weirdness of quantum physics?
We have searched and searched but have never found one.
Up Next
Culture & Religion
Mexico Recognizes African-Descended Residents for First Time
The Mexican census looks a little different this year.