The EFF, a nonprofit civil liberties organization, filed a Freedom of Information Act lawsuit last year after the case of Mark Rettenmaier, a California doctor who faced child pornography charges, revealed a working relationship between the FBI and Geek Squad that goes back at least 10 years.

“We think the FBI’s use of Best Buy Geek Squad employees to search people’s computers without a warrant threatens to circumvent people’s constitutional rights,” the EFF wrote. “That’s why we filed a Freedom of Information Act (FOIA) lawsuit today against the FBI seeking records about the extent to which it directs and trains Best Buy employees to conduct warrantless searches of people’s devices. Read our complaint here [PDF].”

The released documents list payments of up to $1,000 from the FBI to Geek Squad employees; show that Best Buy hosted an FBI meeting at a repair facility in Kentucky; and outline a process of how the two parties would report and investigate customers: First, a Geek Squad employee would call the FBI’s Louisville field office when potential child porn was discovered. An agent would then travel to the store to review the content and seize the device if it contained illegal material. That agent would then send the device to another FBI office near where the owner lived, leaving local agents to pursue an investigation. 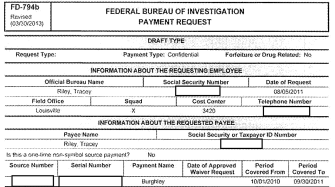 This suggests Geek Squad employees were “fishing” for illegal content on customer devices to help the FBI.

“Their relationship is so cozy,” James Riddet, Rettenmaier’s attorney, told The Washington Post last year, “and so extensive that it turns searches by Best Buy into government searches. If they’re going to set up that network between Best Buy supervisors and FBI agents, you run the risk that Best Buy is a branch of the FBI.”

Best Buy told NPR that it reports child pornography to the FBI when discovered because of “moral and, in more than 20 states, a legal obligation,” but said its employees are prohibited from searching for “anything other than what is necessary to solve the customer’s problem.” The company said it has reprimanded at least one of its employees who received payment from the FBI.

According to the EFF, the FBI has refused to confirm or deny whether it has similar relationships with other computer repair businesses, despite specific requests for such records in the lawsuit. The civil liberties organization plans to challenge the FBI in court later this year.

Related
Neuropsych
Psychology studies that go viral are likelier to be bogus
A new 20-year analysis of over 14,000 psychology studies finds that a study’s media coverage is negatively linked to its replicability.
The Future
How a device transmits radio waves with almost no power
Apart from the energy needed to flip the switch, no other energy is needed to transmit the information.
The Present
Radical idea: Redraw the U.S. map as a nation of city-states
While cities drive national economic growth, their political geography means they cannot effectively deal with inequality, poverty, and other socioeconomic problems.
The Learning Curve
Why do high IQ people stagnate in their careers? Emotional intelligence
Research suggests that emotional intelligence is more vital for success than IQ.
The Present
Even in the age of AI, some problems are just too difficult for computers
Computers are growing more powerful and more capable, but everything has limits
Up Next
Culture & Religion
Simone de Beauvoir’s political philosophy resonates today
A less well-known facet of de Beauvoir’s philosophy, particularly relevant today, is her political activism.