The British Columbia city, where the average price of a detached home sits at over C$2.2 million ($1.7m USD), is the most expensive place to live in North America and currently sports the second-least affordable housing market in the world, trailing only Hong Kong.

And while the causes of the real estate surge are myriad, frustrated residents are latching onto a common scapegoat: foreigners. 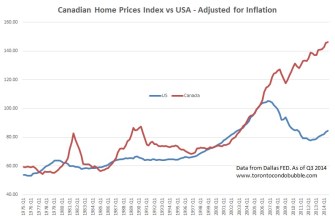 While the U.S. housing bubble popped around 2007, Canada’s has kept inflating.

Over the past decade, the posh Vancouver market has become especially popular among Chinese investors who are frequently accused of buying up properties only to leave them vacant. According to the New York Post, around 67 percent of Vancouver-area residents place the primary blame for high housing costs on “foreign investing.” This has led to a wave of anti-Chinese sentiment, a predictable result even for a city perceived to be among the world’s most inclusive and cosmopolitan.

There are plenty of questions surrounding the source of all this Chinese investment. From the New York Post:

“Residents also have questions about the source of Chinese money being invested in Vancouver property, a concern that came to the fore last year when a prominent developer in the city, Michael Ching Mo Yeung, was named as one of the top 100 fugitives wanted by China as part of ‘Operation Skynet.’

The campaign is part of President Xi Jinping’s pursuit of suspected corrupt officials who have fled overseas.”

Social media movements such as #donthave1million have been established to raise awareness about the impact of foreign money on the local housing market. Fueled by the frustration of young professionals unable to achieve home ownership, the hashtag has been used to pressure politicians into prioritizing affordable housing and closing tax loopholes for offshore buyers.

In this video, urban studies theorist Richard Florida details how the 2008 U.S. housing crash would forever alter the perception of home ownership in America and of the American Dream:

It’s undoubtedly true that foreign investors have made a major mark on Vancouver’s luxury real estate market. It’s also true they’re likely not the primary cause of the broader market bubble. As irksome as it may be to defend offshore investors who don’t contribute to the communities they buy into, the Chinese boogeyman is mostly just that.

Vancouver is a desirable place to live. The supply of homes has remained mostly the same over the past two decades. That’s basically almost all you need to know. Foreign investors aren’t the cause of the current status quo; they’re a symptom.

It’s important to remember that Canadian housing prices didn’t crater during the Great Recession like those of its southern neighbor (the chart above demonstrates this well). Vancouver’s bubble continued to inflate and inflate and inflate. It’s only a matter of time until it bursts. It might be tomorrow; it might be two years from now, but bubbles always burst.

The hashtag campaigners have a right to be frustrated about housing, but their anger appears to be mostly misdirected.

VANCOUVER, BC – JUNE 10: A view of the Vancouver skyline with BC Place Stadium prominent during the FIFA Women’s World Cup 2015 on June 10, 2015 in Vancouver, Canada. (Photo by Mike Hewitt – FIFA/FIFA via Getty Images)

Robert Montenegro is a writer, playwright, and dramaturg who lives in Washington DC. His beats include the following: tech, history, sports, geography, culture, and whatever Elon Musk has said on Twitter over the past couple days. He is a graduate of Loyola Marymount University in Los Angeles. You can follow him on Twitter at @Monteneggroll and visit his po’dunk website at robertmontenegro.com.

Steven Spielberg, Tom Hanks, and Joel and Ethan Coen are bringing it all together.