Americans are not as gun-obsessed as some would like their countrymen to believe. Linking gun ownership to the identity of being an American has been a successful sales tactic that is more myth than reality. The numbers show that a small, unrepresentative, but disproportionately vocal portion of the American population, aided by self-serving politicians and a powerful lobby organization, has enacted its agenda over the majority of Americans, who do not own guns and would rather see much stronger gun safety regulations.

How many Americans actually own a gun? A 2016 study by Harvard and Northeastern University put the total number of privately-owned firearms in the U.S. at 265 million, with more than half of that — 133 million — being concentrated in the hands of just 3 percent of Americans, called “super owners,” who have an average of 17 guns each.

For another perspective on this stunning statistic, consider that the Small Arms Survey estimates there to be around 650 million civilian-owned firearms total in the world. In contrast, about 200 million firearms are owned by the armed forces, while 26 million are in law enforcement hands. So we have 3 percent of Americans owning about 20 percent of the world’s stockpile of firearms. 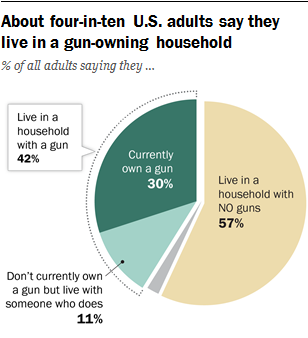 Overall, the percentage of gun owners in the U.S. has been declining relative to the population growth and is at an almost 40-year low,reported the Washington Post. Across a number of national polls, gun ownership has fallen by 10 – 20 percent from the 1970s.

One other telling characteristic — the less education you have, the more likely you are a gun owner. About a third (31 percent) of the people who only have a high school diploma have a gun, 34 percent of those who some college education, but only a quarter of those with a bachelor’s degree report to be gun owners. Among whites only, the number of high school diploma owners with a gun jumps up to 40 percent, compared to 26 percent for college graduates.

Another factor that plays into this – the farther you live from a city, the more likely you are to own a gun, as 46 percent of Americans who live in rural areas are gun owners. This is in contrast to 28 percent of suburbanites or 19 percent of those who live in urban areas, who feel compelled to get a weapon.

Combine this with the statistics that the number one reason (among 67 percent) for owning a gun is “protection,” while 89 percent of gun owners see having one as important to their overall identity and another 85 percent say guns are essential to their sense of freedom. 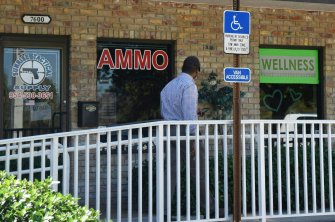 Located next to a Wellness store, this is the Sunrise Tactical Supply store in Coral Springs, Florida on February 16, 2018 where school shooter Nikolas Cruz bought his AR-15 to gun down students at Marjory Stoneman High School. (Photo credit: MICHELE EVE SANDBERG/AFP/Getty Images)

It’s also telling that among gun owners, only 66 percent say they keep their guns in a locked place (34% don’t), 59% take gun safety courses while 41% keep their shooting skills up to date. Only 44 percent keep all their guns unloaded, 26% tell visitors with children that there are guns in the house and only 5 percent would share that knowledge with those who come to their house without children.

So, accordingly, a large enough proportion of gun owners are not up to speed on how to use their guns, don’t keep them locked up or unloaded and won’t tell others they have guns in the house, even if children are involved.

Now, how many people are involved with the all-powerful National Rifle Association (NRA)? There are about 5 million members of the NRA, the leading gun lobby organization. Of course, the NRA has some stats of its own, looking to bolster its percentages in a country of 321 milliion. It counters that if you take into account lapsed memberships and people whose family members are in the NRA, you can get “more than 14 million Americans” who “consider themselves NRA members.”

It’s telling, of course, that the NRA is counting members by estimating what people might be thinking rather than actual facts, while spending at least $203.2 million dollars on political activities which include donating to candidates and lobbying, since 1998 (as per PolitFact). The group also often spends money indirectly to help defeat any legislation that it may perceive to be lessening gun rights or contributes to candidates through affiliates. 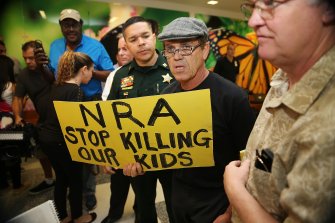 A protester holds a sign that reads, ‘NRA Stop Killing Our Kids’, outside the court-room where Nikolas Cruz, 19, a former student at Marjory Stoneman Douglas High School in Parkland, Florida, was having a bond hearing in front of Broward Judge Kim Mollica at the Broward County Courthouse on February 15, 2018 in Fort Lauderdale, Florida. (Photo by Charles Trainor Jr. – Pool/Getty Images)

The NRA was a significant factor in the repeal of an Obama-era law that was blocking mentally ill people from purchasing guns. The measure to nix the existing rule was signed by President Trump in one his first actions on the job. This fact has come back to life with a vengeance in the aftermath of the high school shooting in Florida, where a mentally unstable teenager, who was repeatedly reported to the authorities, was somehow allowed to purchase an AR-15 semi-automatic rifle – the weapon with which he carried out the horrific tragedy of murdering 17 people.

According to the Pew Research Center, 89 percent of both gun-owners and non-gun owners agree that there should be legislation that would prevent the mentally ill from purchasing guns. 77% of gun owners and 87% of non-gun owners (84 percent of total adults) think there should be background checks for private sales and at gun shows, closing the “gun show loophole”. Over 80 percent of both groups would bar gun purchases to people on the no-fly or watch lists, and 71 percent would create a federal database to track gun sales. 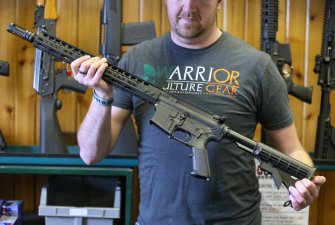 Of course, as regulations stall, the sheer amount of guns in America is staggering to consider as is the number of mass shootings, with more than one mass shooting happening per day on average. It is a shameful statistic for a developed country and a world leader. Stronger laws are necessary but any attempt at them has been constantly pushed back by gun-lobby influenced politicians. In fact, the opposite has been happening – there are fewer restrictions than ever.

One other factor to consider if you think the gun lobby cannot be stopped and nothing will ever change in America — as of 2018, gun sales are going down. It’s not hard to guess why — President Obama is out of office and “fear-based buying” is down with the pro-gun President Trump in office. No longer can it be claimed by the gun industry that Obama is coming to take anyone’s guns.

And maybe that’s how it should be. What people who see gun control as necessary need is to cause a change in consciousness that cannot be enacted by any one man or woman. The majority of Americans see plainly the danger unregulated guns continue to pose to their society but must finally feel their power in numbers. They have to organize and make changes to the reality where a relatively small amount of passionate people, who see guns as essential to their identity (which is not a part of the national character of America), dictate their will.

Related
13.8
The weirdness of quantum mechanics forces scientists to confront philosophy
Though quantum mechanics is an incredibly successful theory, nobody knows what it means. Scientists now must confront its philosophical implications.
Neuropsych
Why is a Starbucks loyalty rewards program making customers so angry?
The rewards price to get a free cup of hot coffee at Starbucks is going up.
Empowering growth
7 essential management training topics for every team leader
From emotional intelligence to problem solving, these management training topics will set team leaders up for success.
Thinking
What if you could rewire your brain to conquer suffering? Buddhism says you can
For Buddhists, the “Four Noble Truths” offer a path to lasting happiness.
Hard Science
Solved: 500-year-old mystery about bubbles that puzzled Leonardo da Vinci
The solution involves the infamous Navier-Stokes equations, which are so difficult, there is a $1-million prize for solving them.
Up Next
Politics & Current Affairs
Mercury making its way into global drinking water thanks to global warming
Once the permafrost thaws, it’s the beginning of the end for the aquatic food chain.