As former U.S. President Jimmy Carter explained in the Big Think special series “When China Rules the World,” China is shaping up to be one of America’s primary competitors in the future global economy. The infographics below provide an entry-level fact base for putting the growing rivalry into perspective. 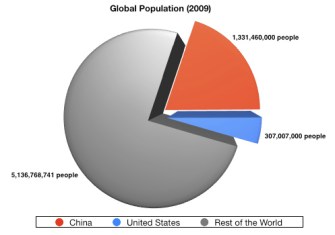 With over 1.3 billion citizens, China’s population is about four times that of the United States. In fact, China comprises about 20% of the world’s population. *For more on the relative population of the world’s countries, check out Frank Jacob’s “World’s Countries Rearranged by Population” at Big Think’s Strange Maps blog. 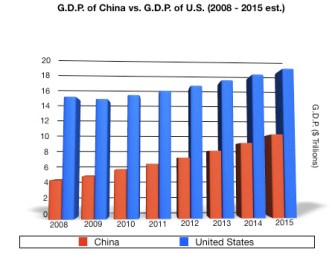 According the International Monetary Fund’s latest “World Economic Outlook Report” (October 2010), when taking projected exchange rates and inflation into consideration, the United States’ G.D.P. will still exceed that of China in 2015. However, these projections could be radically altered if China were to unpeg the yuan from the dollar. 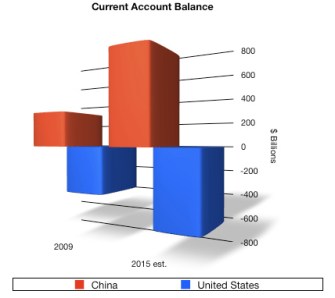 Unlike the United States, which is currently running a $13 trillion deficit, China export-driven economy allows it to run a positive current account balance. In the graph above, current account is defined as all transactions other than those in financial and capital items. The focus of the balance of payments is on transactions between each economy and the rest of the world in goods, services, and income. 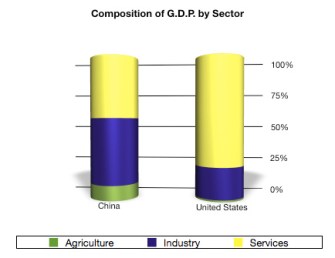 46.3% of China’s total G.D.P. comprises industrial production, while U.S. — long-ago known for its robust manufacturing sector — now produces 76.90% of its G.D.P. in the form of services. With over 1.3 billion mouths to feed, and a gross national income per capita of only $3,590, many Chinese still exist as small farmers, en mass bringing the agriculture output of China’s economy to 10.30% of its G.D.P. 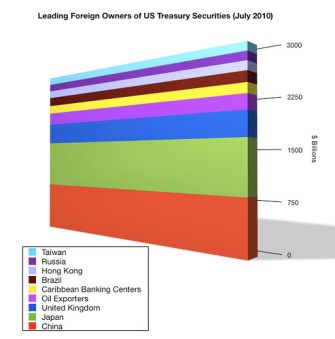 The American media, as well as a number of former Big Think guests, have been quick to express concern over China’s acquisition of American debt. As of July 2010, the Chinese owned about $846.7 billion worth of U.S. Treasury Securities alone. When taking both public and private debt into consideration, as well as debt that China owns through foreign intermediaries, former Big Think guest and former Chief Economist of the International Monetary Fund, Simon Johnson, says the Chinese own well over a trillion dollars of U.S. debt.

Despite its massive population, there is still an enormous amount of growth potential in the Chinese economy. There are, for instance, only 48 mobile phones for every 100 people. Contrast this with the United States, where there are 89 mobile phones per 100 people, and you can begin to see why media financier Steven Rattner says China is “the great future growth story of the world.” 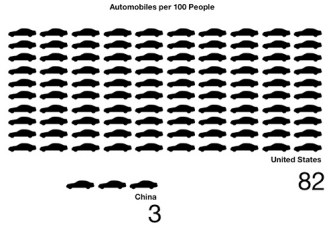 As China continues to grow a more robust middle class, their appetite for costly consumer products, such as cars, will continue to rise. At the moment, despite being one the world’s top automobile manufacturing hubs, there only about 3 cars for every 100 people in China. Contrast that to the United States, where there are 82 automobiles per 100 people, for yet another reminder why China’s economy seems to be choc-full of economic potential. 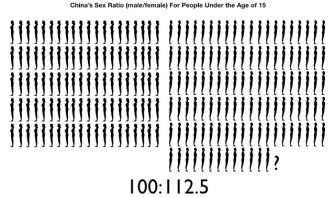 China’s imbalanced male/female ratio is one marked difference between Chinese and U.S. society that could have significant effects over the coming decades. China’s imbalance is a result of families in rural China giving preference to male pregnancies. Sociologists say parents favor males because traditionally girls get married and leave their parents with no one to take care of them in old age. At the moment, there are 112.5 males under the age of 15 for every 100 females under the age of 15. This means as many as 32 million marriage-aged Chinese men may be left single over the next 20 years.

A New Era for NASA?

Yesterday, SpaceX became the very first commercial company in history to re-enter spacecraft from low-Earth orbit. Another first was on November 23rd when the Federal Aviation Administration (FAA) issued a […]