There are many points of view on what exactly happiness is. Is it being successful, having close friends and a loving family, long stretches of contentment, or reaching your own life goals? If you define it as contentment with life, you may be surprised at what age(s) most people find it. There’s often more than one peak. According to a series of seven surveys recently digested and charted, most people are happiest around age 20.

Happiness drops down from then on, reaching its lowest point in middle-age, only to rise again around retirement. The results of this sweeping evaluation were published in a report by the National Bureau of Economic Research. 1.3 million randomly selected people from 51 different countries, took part in one of seven surveys. These included the General Social Survey taken by 54,000 Americans, the Understanding Society survey taken by 416,000 British, and the European Social Survey taken by 316,000 Europeans, from 32 different countries.

Respondents were asked questions about their psychological health and well-being. All participants were between the ages of 20 and 90. When examining the data, researchers took two approaches. The first was straightforward and the second accounted for other influences, such as income and health. People were asked in two different ways about their level of contentment. In one, they were asked if they were happy or unhappy, and in the other, their level of life satisfaction.

Researchers took a large cross-section from each survey and compared happiness and life-satisfaction, using both evaluation methods. With each and across seven data sets, they received the same result, what’s called “a midlife low.” The data formed a U-shaped graph. So far, there’s been no explanation as to why life contentment is shaped like this. Though satisfaction sinks from age 20 onward, things pick up again around 50, and throughout retirement and old age people report ever-growing happiness. 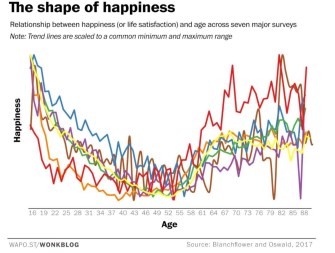 Some things to know about this chart: the absolute values aren’t comparable. Also, what’s important is the shape of the curves. Even if people report lower happiness in their 40s and 50s, that doesn’t mean they’re miserable. For instance, in one survey, people in their 40s rated their life satisfaction 7 out of 10, or 3.5 out of 5. But that’s still significantly lower than those in their 20s reported.

The U-shaped curve has been around since the 1990s. And researching happiness isn’t new. Richard Easterlin at the University of Pennsylvania was the first in America to emulate happiness studies abroad. He discovered the Easterlin paradox, or the point where rich countries no longer gain more happiness from attaining greater wealth.

In the ‘90s David Blanchflower of Dartmouth University and Andrew Oswald of the University of Warwick, began conducting international studies on life satisfaction. They noticed this U-shape pattern emerging, present throughout nations across the world. Since then, primatologists have found chimpanzees and orangutans suffer the U-shaped curve as well. Apes generally hit bottom around ages 45-50. So this phenomenon may emanate from our primate past. 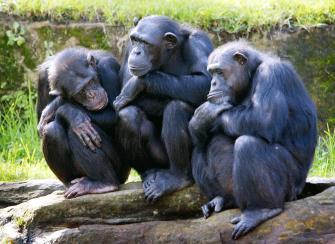 What this study does is offer the strongest and most sweeping evidence yet that the U-shaped curve exists. There have been a few others in recent years that brought the curve into question. Some showed a flat or wavy pattern to happiness in some countries. But this evidence offers strong corroboration for past findings. What’s more, it may help us sort out why people suffer a psychological low in midlife.

Some experts speculate it’s because people often reach the height of their careers at this time, which adds lots of stress. Also, if they have children, they’ve likely reach adolescence. Other reasons include a higher risk of serious setbacks like a divorce, a financial crisis, or a heart attack. Then there are personal questions that creep up at this time.

Realizing that half of one’s life is over causes him or her to ruminate over their life’s accomplishments. Naturally, many start comparing themselves to others, or wishing they had accomplished more. So what happens afterward, when life satisfaction begins picking up again? It could be that people begin focusing on the present rather than the past, and this allows them to really appreciate their life and the people in it.

To learn more about the science of happiness, click here:

Related
The Past
How the death of alchemy gave birth to modern science
Far from practicing witchcraft, the experimentation of medieval alchemists helped bring about the Scientific Revolution.
The Well
This is what the fourth dimension looks like
Left–Right, Back–Forth, Up–Down. What’s the fourth dimension?
▸
3 min
—
with
Brian Greene
The Present
How heat pumps of the 1800s are becoming the technology of the future
Innovative thinking has done away with problems that long dogged the electric devices — and both scientists and environmentalists are excited about the possibilities.
Starts With A Bang
JWST’s hunt for most distant galaxies gets double boost
Along with gravitational lensing and ALMA’s incredible long-wavelength spectroscopy, JWST is reshaping our view of the early Universe.
Thinking
Finding your essential self: the ancient philosophy of Zhuangzi explained
Adopting a healthy scepticism towards inherited ideas means “emptying the container of the Self.”
Up Next
Mind & Brain
It Was the Dress in 2015. In 2017 It’s the Silent Gif People Can Hear.
A silent gif is sweeping the web because many people think they can hear it.