The trouble with teenagers is well-known to many parents: they are hormone-driven, thrill-seeking bundles of eros with a shocking inability to think through the consequences of their actions. Adolescents don’t just procrastinate and spend too much time playing video games. They endanger themselves by driving too fast and too recklessly, sometimes while under the influence of alcohol. They take drugs that threaten their health and well-being. And they engage in unprotected sex at alarming (if now somewhat lower) rates, resulting in teenage pregnancies and sexually transmitted infections (STIs). David Dobbs summarized the science of teenage risk-taking a few years ago in National Geographic:

We court risk more avidly as teens than at any other time. This shows reliably in the lab, where teens take more chances in controlled experiments involving everything from card games to simulated driving. And it shows in real life, where the period from roughly 15 to 25 brings peaks in all sorts of risky ventures and ugly outcomes. This age group dies of accidents of almost every sort (other than work accidents) at high rates. Most long-term drug or alcohol abuse starts during adolescence, and even people who later drink responsibly often drink too much as teens. Especially in cultures where teenage driving is common, this takes a gory toll: In the U.S., one in three teen deaths is from car crashes, many involving alcohol.

This is why car rental agency are so reluctant to rent to drivers under the age of 25 and demand a steep premium when they do. It’s why insurance rates are higher for younger drivers, especially young men. One might conclude that the brains of teens are wired poorly, leading them to act on instinct without appreciating the risks of their behavior. That assumption is as widely held as it is deeply and curiously mistaken.

It’s not that teens lack the capacity for rationality or think of themselves as immune to mortality. Laurence Steinberg, a developmental psychologist quoted by Dobbs, says teens are just as capable of judiciously contemplating benefits and risks as adults; they “actually overestimate risk,” he says. Teens do understand the risks they take. They just ignore those risks too often, sometimes with tragic results.

In a new study investigating alternative interventions to nudge adolescents toward safer behavior, psychologists Valerie Reyna of Cornell and Britain Mills of the University of Texas argue that teaching students the “gist” of how to act in a given situation is significantly more effective than just giving them the tools to weigh risks using their own powers of rationality. Reyna and Mills’ experiment exposed 734 teens from Arizona, Texas and New York to one of three different curricula to determine which is the most successful at promoting safer sex. One-third of the 14-19 year olds were assigned to a sexual education program model known as Reducing the Risk (RTR), one third to an enhanced model, RTR+, and the final third to a control curriculum with no sexual education content.

Both the RTR and RTR+ classes emphasized the risks of sexual behavior and, in particular, the risks of pregnancy and infection from unprotected sex. Here, for example, is how the educators drove home the idea that sex will eventually lead to pregnancy:

Given the probability of becoming pregnant for one act of unprotected sex, and assuming one such act per month, participants in the class drew cards from a hat representing whether they became pregnant. Participants who “become pregnant” stand, and the activity continues for one simulated year (12 draws), at which point the entire class is typically standing. In other words, the activity was structured so that by the end of the simulated year, virtually all of the participants became pregnant (or had gotten someone pregnant). The activity was accompanied by an interactive class discussion about when exactly they became pregnant in the exercise, when they would have the baby, and what the pregnancy would mean to the participant. For example, participants discuss how the pregnancy and baby would affect their own plans for the future (such as going to college) and how it would affect their life in the short term (such as involvement in extracurricular activities). Comparable discussions and activities were presented for STI infections.

That’s pretty powerful stuff, and it did have an impact on the teenagers’ sex practices over the ensuing months compared to those receiving no sex education at all. But this approach was not as effective as that used in RTR+ classrooms, where the exercise was summed up at the end with a “gist” statement, what the authors also call “the pragmatic bottom line”:

“Pregnancy might occur the 1st month, at 6 months, or at 13 months,” Reyna and Mills write, “but the gist is that it ‘would happen’ in about a year.” Such a “categorical contrast between an event occurring and not occurring (all-or-none),” coupled with repeated attention to the adolescents’ own values, resulted in impressive results over mere recitation, or demonstration, of the risk. The authors’ bottom line—yes, the gist of their article—is found in this graph. Follow the solid black line: 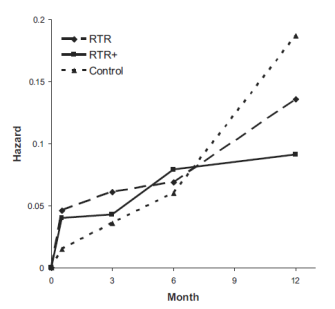 Simply walking teenagers through the risks of unprotected sex (the dashed line) helps to lower the degree to which they take risks with sexual partners—it does improve their “Hazard” profile over a curriculum with no sexual education (the dotted line). But drilling the moral of the story into their heads after walking them through the risks (the solid black line) is even more effective. What holds for sex ed should hold for drinking, driving, drugs and more: adolescents need to hear the bottom line, and hear it loud and clear. Being suggestive isn’t enough.

Fear of Ebola. A Greater Risk Than the Disease Itself

Ebola is starting to pose a serious risk to public health in America. But the threat is not the disease itself. The real danger is a growing epidemic of fear, an infection that spreads much more readily than the virus, is far harder to treat, and which threatens to cause much more sickness and death. The longer this epidemic of fear persists, the greater the likelihood that fear of Ebola in the United States will harm public health far more than the deadly hemorrhagic virus itself.