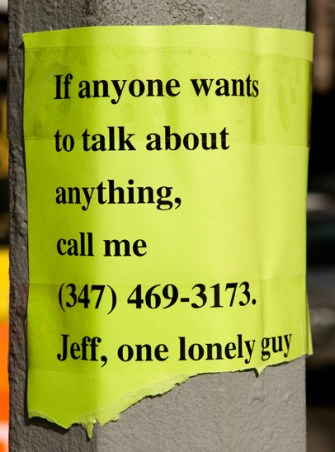 When I first saw them, they really caught my attention. For some reason, I wasn’t immediately repulsed, as was a female friend of mine (her response, when I pointed them out, was something like “ew…creepy.”). At first, the fliers struck me as a disarmingly sincere – an honest, touching gesture with no strings attached. In our guarded, jaded, best-foot-forward world, here was a guy who was willing to admit vulnerability and talk to total strangers about it. Further, the move didn’t seem completely self-serving: Jeff was interested in your loneliness, too. This was an interesting alternative to the psychiatric medicalization of the angst that we all feel at times – an anonymous mutual support line. I’m not all that lonely, honestly, but for a minute there I kind of wanted to talk to Jeff, too.

Then I had a second, less charitable thought. Perhaps, it occurred to me, this is some kind of publicity stunt. And even if it isn’t, even if this is the totally sincere gesture of a lonely and well-meaning soul in an indifferent world, how long will it be before some New York Times reporter calls this guy up, and he ends up with a book deal?

Today, this publicity notice landed in my inbox:

Jeff, a lonely, down-and-out actor posted flyers around Manhattan asking people to call him if they wanted to talk. He thought he’d get maybe a dozen calls and he now has received about 65,000 calls from all over the world. The texts and voicemails recorded in this book reveal a sometimes hilarious, but also dark and intimate portrait of the way we live now and the suffering of loneliness.

Which raises a whole new set of questions for me:

A vertical map might better represent a world dominated by China and determined by shipping routes across the iceless Arctic.
Up Next
Politics & Current Affairs

What is the Big Idea?Chinese authorities have shuttered the 42 websites and more than 210,000 posts about a major political scandal rocked the country,Agence France Presse reported.A three-line announcement on the official Xinhua news […]