Is an $81,000 Louis Vuitton backpack any better than $25 Jansport backpack? I don’t know — perhaps the fine folks at Louis V should send me one to find out! I promise to be fair in my judgment. Until that day comes, though, we’ll have to make do with the findings in a recent study published by Caltech, that has scientifically proven that men with more testosterone tend to buy status symbols.

There’s a simple way to read the study: increased testosterone levels can manifest as heightened aggression, and this aggression turns into what the Caltech scientists refer to as “status aggression”.

The 243 participants of the study — which you can read in full here — were given either a 10mg dose of testosterone or a placebo, administered through a patch. About four hours later they were asked to return to the lab and rank goods in a “1 to 10” ranking system, 1 being bad and 10 being the most desirable. The men who had been given the testosterone overwhelmingly preferred the luxury items.

This probably comes as no surprise to anyone who has visited a nightclub in the last 20 years, particularly one with bottle service. This idea of status preys upon the insecurity of the dude perfectly willing to spend $350 on a $29 bottle of Grey Goose, which regularly mark-up bottles of alcohol up 1000% from their original price, such as $29 bottles of Grey Goose selling for $350. At the Hakkasan in Las Vegas, they have a bottle of rosé priced at $295,000 — roughly the average price of a house.

Since we no longer have to hunt for food, there are fewer ways for men to show dominance. In a consumerist society, this is how that show of dominance manifests. We’re actually so far past hunting that we can now just order food online and not even have to leave the house—leaving this very ancient and ingrained behavior with nowhere to go.

So now, instead of hitting the gym and getting swole, we now have SUPER COOL dudes like this guy who spend thousands of dollars on “hype” clothing brands like Supreme. Next time you get out your credit card to spend 3 month’s salary on a bag, remember you’re not far off at all from this guy: 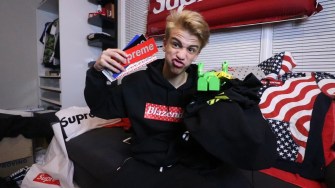 NASA was dangerously cavalier about the dangers of the shuttle launches.
Up Next
Mind & Brain

Why subclinical narcissists have a competitive advantage

New research shows narcissists aren’t smarter than the average person, but they have a secret weapon that helps them succeed: mental toughness.