It is impossible to discuss either Eastern philosophy or the history of China without discussing Confucius.

Raised in poverty by a single mother, he would go on to become one of the most influential philosophers of all time. He looked at the chaotic age he lived in and longed for a return to the golden age of the Zhou dynasty of several centuries past.

He decided that the cause of China’s strife was a moral decline and that a return to virtue in both individuals and governance could restore the glory, harmony, and progress of ages past. To that end, he developed a philosophy of self-cultivation and ritual. He then toured the various states of northern China in an attempt to find a court that would enact his ideas.

While he failed in this venture, he did teach many students who went on to promote his work after his death. After the adoption of Confucian ideals by the Han dynasty, Confucianism went on to have a 2000-year run of being the dominant ideology of China, with only a few interludes on the sidelines. 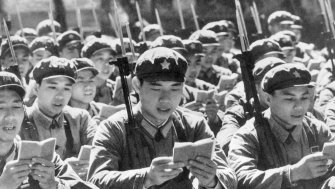 One such deviation was the latter half of the 20th century and the Cultural Revolution in particular. At the height of the chaos, Red Guards, fanatic young students as seen above, attacked temples, statues, worshipers, and even Confucius’ cemetery. (Photo by Keystone/Getty Images)

What does Confucius teach?

To help you get an introduction to one of the greatest thinkers of all time, we have ten quotes from Confucius that explain the major points of his philosophy.

The goal of Confucianism: How to become a ‘junzi’

“From the Son of Heaven on down to commoners, all without exception should regard self-cultivation as the root.”

Confucius’ teachings encourage everybody to pursue self-cultivation as a means to moral perfection. The goal of this cultivation is to become a junzi (君子 literally: ruler’s son), translated as “gentleman” or “superior person”.

Such a person will be sincere, trustworthy, compassionate, humble, and righteous. A junzi can also inspire others to improve themselves, starting a chain of moral development that, eventually, leads to social harmony.

This idea was radical when he proposed it; he was suggesting in a feudal society that anybody with the right education could become a great person, not just the nobility.

How do you build virtue? Rituals, lots of rituals

“A man who is not good, what can he have to do with ritual?”

Confucius was big on ritual, ceremony, and etiquette, discussing at length the proper ways to eat, revere ancestors, and address others. He saw these seemingly superfluous actions as a vital part of our moral education. By engaging in these actions day in and day out, we are driven towards the good and away from vice.

The idea here is that when you practice a ritual, like bowing to an elder, you must also feel the proper emotions, respect in the case of bowing, to do it correctly. By practicing like this, you eventually come to master the virtues.

This means that even when the ritual seems dumb, you ought to do it. As he once explained to a disciple who objected to the needless sacrifice of an animal, “You love the sheep; I love the ceremony.”Showing us that the action is needed to help us grow, not merely an understanding of why we are doing it.

Learning is good in and of itself

“To learn something and rehearse it constantly, is this indeed not a pleasure?”

Confucius maintained that his only advantage was his love of learning and that education was the first step on the road to moral improvement. To that end, he supported removing social and economic barriers to education and took on many students without regard to their backgrounds.

However, he also warns against mere memorization of facts and data, and speaks many times against the idea that the mere hoarder of information is wise. He reminds us that acting on this knowledge is also required when he says, “To be fond of learning is to be near to knowledge. To practice with vigor is to be near to magnanimity.”

“Surely proper behavior towards parents and elder brothers is the trunk of goodness?”

Confucius saw the family as the fundamental moral unit. In the family, we get our first taste of the relationships that constitute society and a chance to practice the rituals and virtues that later make us good people.

The virtue of being a good family member, filial piety, is also a cardinal virtue in Chinese culture. 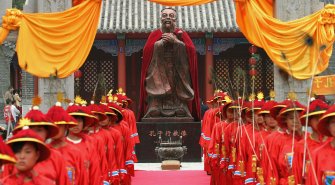 Students stand before a statue of Confucius at a temple in Changchun. (Photo by China Photos/Getty Images)

“At fifteen I set my heart upon learning.
At thirty, I had planted my feet firm upon the ground.
At forty, I no longer suffered from perplexities.
At fifty, I knew what were the biddings of Heaven.
At sixty, I heard them with docile ear.
At seventy, I could follow the dictates of my own heart; for what I desired no longer overstepped the boundaries of right.”

Mastering your desires, thoughts, and actions is a lifelong process. You can’t become the ideal “superior person” over a weekend. When you feel like you’ll never succeed, remember that it took Confucius himself a lifetime to master his own teachings.

A government must be virtuous

“You are governing; what need is there for killing? If you desire the good, the people will be good. The virtue of the superior man is wind; the virtue of the small person is grass. When wind passes over it, the grass is sure to bend.” — Confucius’ response to the ruler of the Chinese state Lu, when asked if it was wise to exterminate those without virtue.

Just as a single upstanding person can cause those around them to become virtuous, Confucius held that a righteous ruler could help an entire people become better citizens. It is therefore vital to the ideal state that the rulers, ministers, and officials be virtuous and well educated.

He also held the opposite to be true and warned that a vicious ruler would cultivate a cruel people. It was vital, then, that the best leaders possible be found to govern.

This dedication to meritocracy is seen elsewhere in his teachings and lead to the creation of comprehensive civil service exams by Confucian ministers to help find the junzi who could best run things. The west would later steal this very good idea.

Know the ways of heaven, but don’t be concerned with your afterlife

“If we don’t know life, how can we know death?”

Confucianism is a philosophy for living. As such, it is unconcerned with the exact details of what happens after death and Confucius himself refused to speculate on it.

He did believe in a cosmic order, referred to as 天 (tian) and often translated as “heaven,” which intervened in human affairs. He argued that we should respect and seek to emulate this order, but spoke of it only occasionally in his teachings.

Confucianism also maintains the existence of spirits, ghosts, and Gods which should be worshiped and adequately respected though ritual.

The simple form of morality

“What you do not want done to yourself, do not do to others.”

Yep, China did it first. The silver rule, as this negative phrasing of the golden rule is often called, is dated to more than 400 years before Christ’s birth.

While following this rule is not a replacement for the personal development explained above, Confucius did see this as an excellent rule to follow, and the virtuous person would act this way in any case.

If you would like to learn more about Confucius, there is an excellent documentary on his life and ideas here. You can also find books on his life and his philosophy at your local library.

Be careful though, Harvard historian Michael Puett explains in this interview how easy it is for Westerners to misinterpret Eastern philosophy.

Related
Starts With A Bang
NASA’s Habitable Worlds Observatory to finally answer the epic question: “Are we alone?”
NASA has finally chosen which flagship mission, like Hubble and JWST, will launch in ~2040. Detecting alien life is now a reachable goal.
Health
The scientific highs and lows of cannibinoids
Hundreds of these cannabis-related chemicals now exist, both natural and synthetic, inspiring researchers in search of medical breakthroughs.
Strange Maps
The horrors of World War II air war, in one stark map
This graph shows how badly German cities were hit by Allied bombing raids.
Hard Science
Subatomic ghosts shed new light on the structure of protons
A Fermilab study confirms decades-old measurements regarding the size and structure of protons.
The Present
The Taoist philosophy behind Alibaba, China’s e-commerce giant
Alibaba has played a key role in China’s meteoric economic rise.
Up Next
Politics & Current Affairs
YouTube removes Infowars and The Alex Jones Channel
On Monday morning, YouTube removed Infowars and The Alex Jones Channel from its platform, following similar bans from Apple, Spotify and Facebook.