Peter Baumann suggests that our biases can get a bad rap, but that they’re essential. He sees them as unconscious inclinations that we’ve developed over time, and most of the time, they reflect actual knowledge we’ve acquired about how the world works. They set the frameworks within which we live our lives. Our bias toward feeling safe, for example, keeps us (mostly) out of trouble, while a bias towards certain flavors sets us parameters for selecting the dish we’d like to eat at a restaurant. Of course, our biases are only as intelligent as we are, so occasionally they’re pretty stupid.

There’s a category of not-so-helpful mental habits and inclinations called “cognitive biases.” The problem with these biases is that when we incorrectly apply them to decision-making, they prejudice our thought process and keep us from thinking, and deciding, clearly.

Researchers have identified a number of these mind traps. In this video, Baumann zeroes in on confirmation bias, where we ignore any evidence that doesn’t support what we’ve already concluded, and only find things that prove it. He also nominates the uniqueness bias as maybe the most amusing cognitive bias.

Julia Galef has a great method for avoiding another common bias, the commitment effect. It’s the one where you keep doing what evidence suggests may not be working anymore because either you don’t want to feel your investment up until now has been wasted, or because the behavior has become tied up in who you feel you are. Her tip? Ask yourself what you would do if you were just coming to the problem from the outside.

At Business Insider, Samantha Lee put together a great infographic showing 20 cognitive biases that can get in the way of solid decision-making. 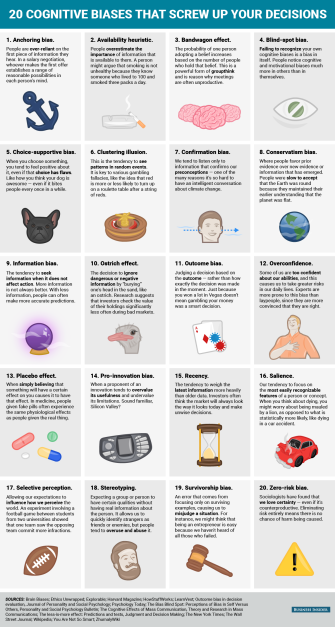 If you make a lot of decisions, this seems like a fantastic tool to have available so you can double-check the integrity of your thought process at those times when it’s absolutely critical that your cognitive biases don’t prevent you from thinking clearly.

Can We Learn to Die Better?

Like many things in America, death is a business. And we’re not doing it well.