Were Some Vikings Muslim? A New Discovery Raises Questions

A controversial discovery shows how Islam could have influenced the Vikings. 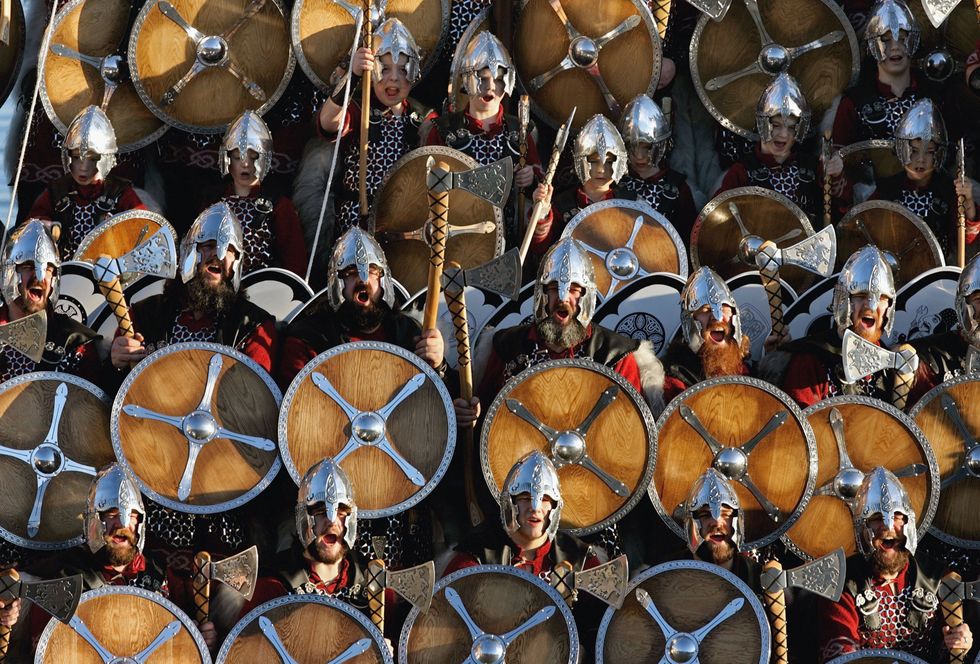 Locals dressed as Vikings march through the streets of Lerwick on January 31, 2006, in the Shetland Islands, Scotland. (Photo by Jeff J Mitchell/Getty Images)

A Swedish researcher discovered Arabic characters that spell out the word “Allah” on Viking burial clothes. Annika Larsson, an expert in textile archaeology from Uppsala University, who made the finding, called it a “staggering thought” that these designs appeared in Viking territory.

Larsson saw geometric Kufic characters in typical Viking Age patterns woven with silver threads onto silk. Kufic is an ancient calligraphic script, used in copying the Quran. Some of the patterns may be invoking the word “Ali” - the name of the revered  fourth caliph of Islam, and the word “Allah” when looked at in a mirror image. Larsson thinks the characters may be an attempt to write prayers in such a way that they’d be readable from left to right but using the correct Arabic characters.

“That we so often maintain that Eastern objects in Viking Age graves could only be the result of plundering and eastward trade doesn’t hold up as an explanatory model because the inscriptions appear in typical Viking Age clothing that have their counterparts in preserved images of Valkyries,” said Larrson.

The patterns appear woven on at least 10 silk bands in burial costumes located in boat graves in an area near Gamla Uppsala. Similar designs appear in clothing in other central Viking era chamber grave sites like Birka in Mälardalen. Patterns that look like this have also been found in mosaic grave monuments in Central Asia.

The presence of the characters may indicate an influence Islam on Viking burials, proposes Larsson.

“Presumably, Viking Age burial customs were influenced by Islam and the idea of an eternal life in Paradise after death,” said the researcher. “Grave goods such as beautiful clothing, finely sewn in exotic fabrics, hardly reflect the deceased’s everyday life, just as little as the formal attire of our era reflects our own daily lives. The rich material of grave goods should rather be seen as tangible expressions of underlying values.”

She also thinks that the widespread appearance of silk in Viking graves may be due to the passages in the Quran that say the inhabitants of Paradise will wear silk garments. Larsson theorizes that the Viking settlements in Sweden’s Malar Valley could have been a Western outpost of the Slik Road, an ancient trading route that connected East and West.

Analysis of the Kufic characters on bands found in Sweden. CreditAnnika Larsson

As archaeologists found many Arabic coins in Viking settlements, it is actually known that Vikings traded with the Arab world. This went on for at least 150 years, starting in the early ninth century. But the silk and the woven patterns suggest a deeper connection.

“My opinion is that those who wore the fabrics must have understood the symbolism,” said Larsson to the New York Times. “But certainly, the person who wove the fabrics could read and write and knew what the characters meant… I’m not saying that these are Muslims. But they are partaking in a worldview shared by people living in Central Asia.”

Larsson’s discovery was made as part of trying to recreate burial garment patterns for a Viking Couture Exhibit at Enköping Museum in Sweden. But the researcher’s study is still ongoing and is yet to be peer-reviewed and published. This and the sensational implications of her findings have prompted some criticism from other experts in the field.

The seeming possibilities that the Vikings were in contact with Islamic culture, could have been influenced by it and could have even had Muslims among them did not sit well with many in the conservative media either. The myth of the Nordic warrior is important to white supremacists but that doesn’t mean we need to try to fit history into convenient narratives just to disprove them, says Stephennie Mulder, an associate professor of Islamic art and architecture at the University of Texas at Austin.

She tweeted that, according to existing knowledge on the topic, the style of the Kufic script identified by Larsson was not used in the 10th century. She also thinks the word “Allah” looks more like “Illah” - a nonsensical word. On the other hand, it wouldn’t be surprising if Vikings did have Arabic inscriptions on their clothing, said Mulder to the Atlantic.

“It would be like, for us, buying a perfume that says ‘Paris’ on it,” she explained. “Baghdad was the Paris of the 10th century. It was glamorous and exciting. For a Viking, this is what Arabic must have signaled: cosmopolitanism.”

Larsson, however, is not willing to back down from her claim and thinks more research will reveal supporting details, saying “this discovery opens new questions.”