One achievable solution can stop the epidemic of school shootings in the United States without restricting the guns of law-abiding citizens. 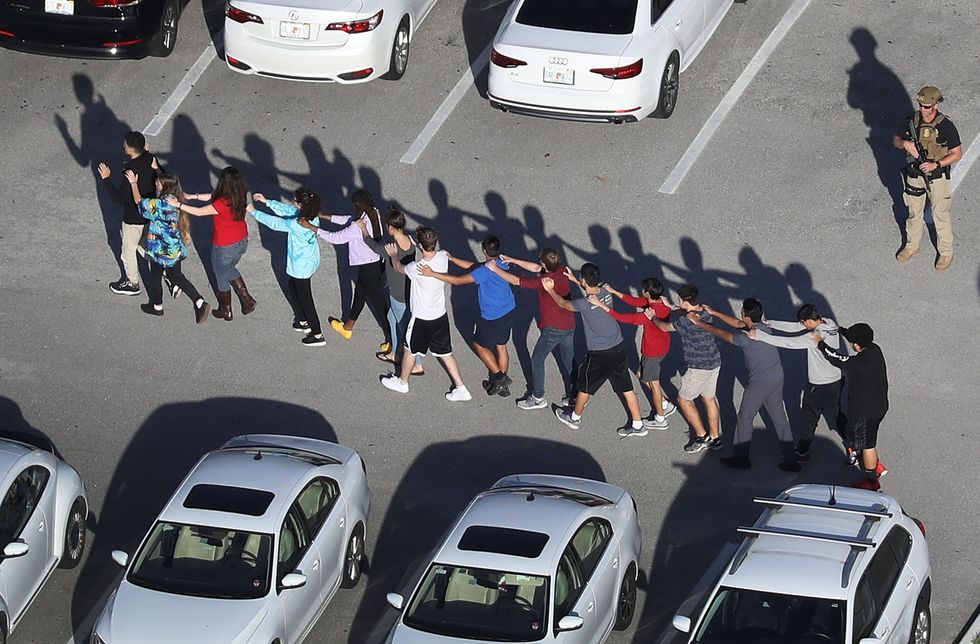 People are brought out of the Marjory Stoneman Douglas High School after a shooting at the school that reportedly killed and injured multiple people on February 14, 2018 in Parkland, Florida. (Photo by Joe Raedle/Getty Images)

Another day, another horrible school shooting in America. This time 17 kids were ruthlessly gunned down at the Majory Stoneman Douglas High School in Parkland, Florida. By now, we have all gone through this nightmare many times and know the cycle that will follow. There will be blame thrown around, some will try to understand why the gunman did it, people will argue about guns, Congress will get pilloried, but nothing will change. We'll just have to wait until the next shooting to do this all over again.

Or we can say that we won't take it anymore. Outside of countries in war zones, the United States is the only place in the world that has school shootings on a regular basis. Why can't we pull ourselves together as a civilized society and fix this?

One way is to stop the arguing. We all can agree that we love our kids. So let's not make this about gun control or anything else that we can't agree about. Let's solve this by doing what Americans do: we throw money at the problem.

Kristi Gilroy (R), hugs a young woman at a police check point near the Marjory Stoneman Douglas High School where 17 people were killed by a gunman yesterday, on February 15, 2018 in Parkland, Florida. (Photo by Mark Wilson/Getty Images)

What would it cost to put metal detectors, security guards and a police officer in every public school in America? Let's do the unthinkable: in this case, some math.

The U.S. Department of Justice estimates that while metal detectors may vary in price range, from $1,000 to upwards of $30,000, a reasonably-priced model of around $4,000 to $5,000 would have the features and reliability for a school environment. How to avoid long bottlenecks in the morning, with students waiting to go through the detector? The experience of the New York Board of Education, with operates such programs successfully in about 50 inner-city high schools, shows that staggering the first period start times works to alleviate the problem of lines.

An additional cost of the detectors is the salary of the people who operate them. On average, NYC school officials have to fund an additional 100 security officer hours a week to run the detection program for a school of about 2,000 students. The hourly rate for such personnel ranges from $12 to $20 an hour, according to Glassdoor. So at the maximum rate, we are looking at an additional $2,000 per week for the requisite school staff. With about 36 weeks of instruction time per year, we are looking at an estimate of an additional $72,000 per year total in extra money that a school the size of a large high school would have to pay.

Now let’s try to extrapolate this to the whole of the United States. According to the U.S Department of Education, there are about 100,000 public schools in the country, including all elementary, middle, high and vocational schools. There are also about 33,000 private schools.

At the rate of $5,000 per unit, it would cost about $500 million to equip all of the public schools with a metal detector.

If we take $72,000 per year in extra security guard pay as the base (and it's likely to be lower as not all schools are as large as a 2,000-person high school), we are looking at $7.2 billion per year in guard pay.

Another factor that could help increase security is having a police officer specifically assigned to each school in the United States. With the average police officer salary being around $61,000 per year, according to the U.S. Department of Labor, we would need another $6.1 billion to accomplish that goal.

So for about half a billion dollars in initial investment, and a total of about $13.3 billion in additional expenses every year, we can get our kids much better protected than they currently are. And the numbers are likely to get lower if we focus on this issue as a society, improving metal detectors and other technology that can keep the kids safe.

Fire Rescue personnel work the scene at the Marjory Stoneman Douglas High School after a shooting at the school that reportedly killed and injured multiple people on February 14, 2018 in Parkland, Florida. (Photo by Joe Raedle/Getty Images)

Is $13.3 billion a year a large number? Sure, but if there's money for the kinds of changes President Trump proposes in his new budget that favors military and infrastructure spending, there could be money for this. Let's just say if there's a will, there's a way. We are a rich society that can afford to re-orient our priorities and funds to safeguard our kids.

Not to mention the actual monetary costs of gun violence. One estimate puts that number as high as $229 billion per year, which includes $8.6 billion in direct expenditures, such as imprisoning people convicted of homicide or assault, and $221 billion from indirect costs, such as lost wages. These numbers are not just for school violence expenditures, but you get the idea. We would very likely save more than we will spend. And we'll have kids who are alive to enjoy life in what is supposed to be the greatest country on Earth. At least that's what the politicians keep telling us.

Wondering how much it costs to protect a University? For about $2 million per year, the University of Kansas would get all primary athletic facilities secured (plus the cost of staff). That’s $2 million total to protect 50,000 spectators per event. The University of Arkansas’s main stadium would cost about $500,000 to outfit with metal detectors at the cost of $6,500 per metal detector. Installing 70 mobile detectors at two sports stadiums for Kansas State University in Manhattan would cost about a $1 million.

In Idaho, buying 54 metal detectors for Boise State University cost $250,000. It also costs $20,000 per game to set up and staff them, while renting tents to cover them runs another $3,500, with the barriers to guide fans towards the detectors running another $2,500.

Again, these might seem like large numbers but these universities have the budgets that can afford it. The University of Kansas, for example, has an annual budget of about $630 million.

You might think that installing metal detectors sends the message to the students that they are not safe, ruining some idyll of childhood they should be enjoying. But let’s face reality. They are not safe. Better to prepare them and protect them than see them carried out in body bags.