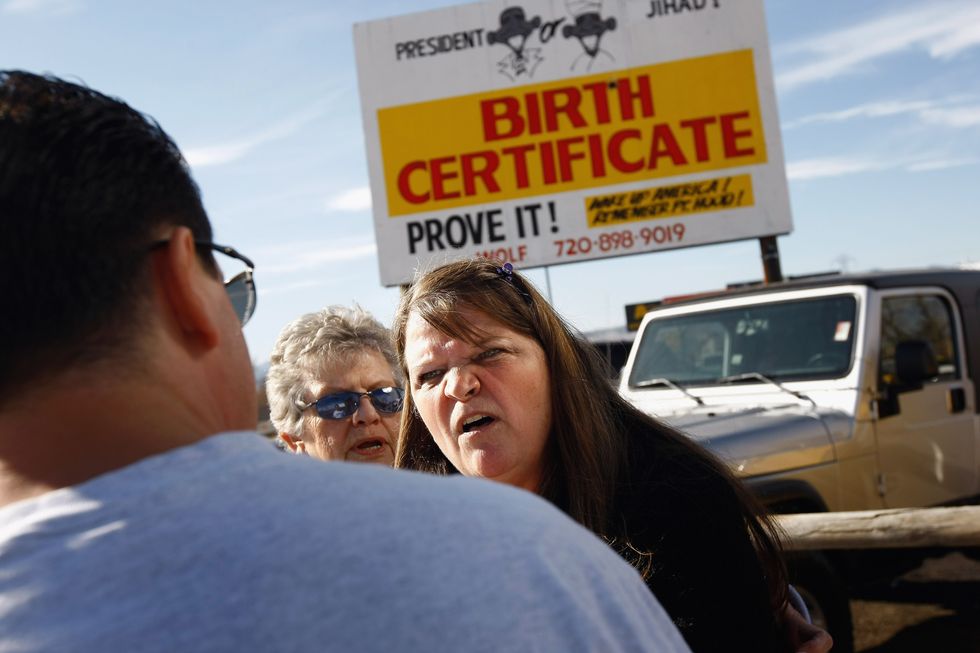 Obama supporter Mary Schaeffer argues with an Obama critic during a protest in front of a controversial billboard questioning the President's American citizenship on November 21, 2009 in Wheat Ridge, Colorado. (Photo by John Moore/Getty Images)

A new study found the extent to which conspiratorial thinking and partisan reasoning inspire beliefs in election-related conspiracy theories.

The researchers analyzed a survey of 1,230 Americans taken before and after the 2012 Presidential Election to see why some people believed conspiracy theories about fraud affecting the results. What they found is that before the election, 62% of the participants believed that if the candidate they were supporting lost, it would be due to fraud. But after the election, the number of such people dropped to 39%, based largely on their partisan affiliation. Since Obama won, fewer Democrats believed fraud was involved, while Republicans were more likely to think some shenanigans were responsible.

The study’s co-author Joseph E. Uscinski said the scientists were interested in the topic because “it is so relevant to our current politics.”

He explained that when Bush was President, Democrats were spreading conspiracy theories about 9/11, Halliburton, Cheney, Backwater and others. But as soon as Obama became President, these theories became “socially and politically inept.” The topic of conspiracy theories shifted to Republican-driven stories about Obama supposedly faking his birth certificate (a theory prominently promoted by President Donald Trump), as well as Sandy Hook, Benghazi and more.

Currently, the most significant conspiracy theories come from Democrats and involve Trump and Russia, according to Uscinski.

“Conspiracy theories follow the ebb and flow of power and losers tend to propagate them the most,” said the researcher.

But it wasn’t only the political leanings that were responsible for conspiracy theories. The study discovered that some people have “conspiratorial dispositions,” agreeing with such statements as “Much of our lives are being controlled by plots hatched in secret places.”

Some people just believe the world is run by secret organizations.

As far as who is more likely to believe in conspiracy theories, the study found no particular difference between the groups, meaning that both Republicans and Democrats are likely to have conspiracists in their midst.

The study, “The Effect of Conspiratorial Thinking and Motivated Reasoning on Belief in Election Fraud“, was also co-authored by Jack Edelson, Alexander Alduncin, Christopher Krewson, and James A. Sieja. It was published in the journal Political Research Quarterly.